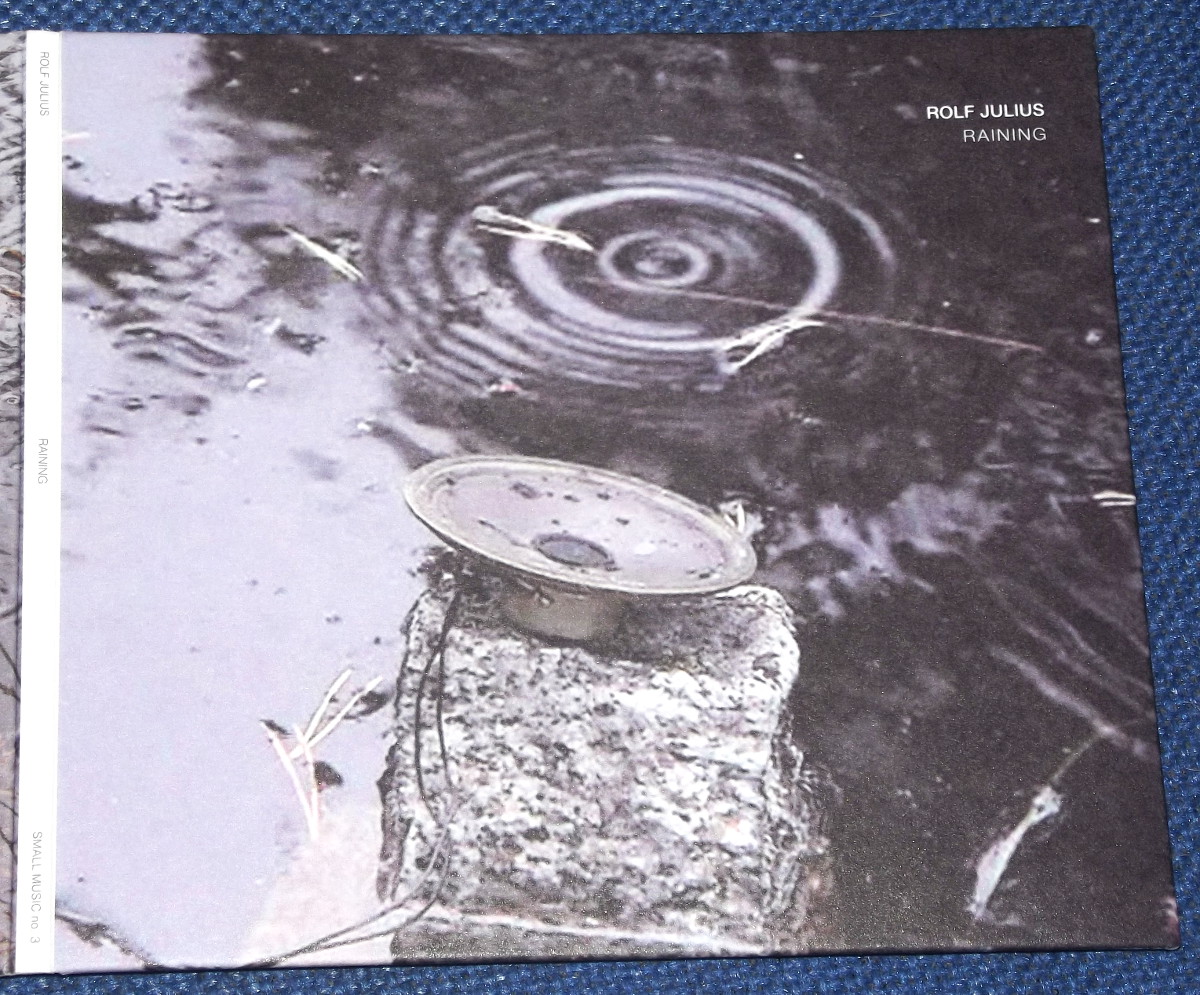 A great shame that the German sound artist Rolf Julius died in January 2011, a fact which I have overlooked while waxing very lyrical about the series of his works being issued by the Western Vinyl label in Texas. We noted Music For The Ears and Music For A Distance, both of which compiled examples of this sound-artist’s installation and field recording works from what I assume must be a hefty catalogue. On Raining (WESTERN VINYL / SMALL MUSIC No. 3) , there is the title piece which is nearly one hour long, itself part of a larger installation work from 2007 called Dot. This rain piece is extremely dense and immersive, a real force of dampened nature which you can easily get lost inside…seems highly appropriate for the current weather in the UK, not that I have anything against the rain in March which cold and penetrating as it might be, somehow feels quite different and invigorating to the miserable rain of November. Julius’ Raining is also invigorating. And meditative. In amongst the continual downfall of heavy precipitation in a meadow or lea, there is the steady creaking and cracking of what I take to be branches of old oaks, soughing and sighing until they resemble the timbers of an old sea-hulk. Also the occasional murmurs of a cow-like beast making its moan through a grey veil of misty fog. Most bizarre of all, tiny notes of music like a celeste or very small piccolo somewhere in overall natural mixture…how can this be…are these notes just artefacts, by-products of the sonic assemblage, or produced by wind chimes in the landscape? If you’re a regular listener to field recordings of the weather, you may think you’ve heard all you need to hear in that genre, but I can assure you Julius’ work has a compelling attraction and a tremendous attention to detail. There is real weight and import to this sound, which may have something to do with the framing, assembly and presentation of the work. That he is able to achieve such precision of thought when working with such intangible elements is not unremarkable.

It seems that when played back on large-scale speakers this gallery art ‘Rain’ thing “engulfs the listener in a dense world…soaked pastures full of life”, according to press notes here. Being engulfed in a dense world sounds good to me, so intention at house of the Projector is to replay said soaken events on big hifi in due course. Hopefully neighbours will find me three days later soaked to my skin, if not drowned to death like character in famous Ray Bradbury story 1. But in one instance of an installation Julius instead used a much smaller speaker, flattening and compressing the sounds into “soft and cyclical patterns” such that listener had the illusion of watching the earth being soaked from a viewpoint high in the sky. This reinforces something about the very physical nature of Julius’ work; it’s not some vapid intellectual proposition, but a strong artistic statement about real, tangible things.

Also on the CD is ‘Weitflächig’, a composition from 2004. At first it might be mistook for more rain, but I think it’s possibly an assembly of short-wave radios. Lots of micro-events…tiny sounds…you could run a microscope over the surface of this one and might be amazed…teeming protozoa pushing about on the slide, stretching their limbs…it’s to do with a methodology this German sound artist had, which he called Music For A Wide Plain. According to his plan it should be possible to breed lots of small sounds in a sonic greenhouse, until they grow and become a wide plain full of life. Or an entire world, like the Project Genesis thing in Star Trek movies. A pattern beginning to appear here…Rolf Julius certainly not an “anti-life” artist…heaven knows we have enough of them and their critical, destructive ways producing art that can only end in more pessimism.

Last piece ‘Music For A Glimpse Inward’, in four and one-half minutes presenting something which is more like music than the long-form experiential type pieces above…there are dynamics and subtle changes, even musical tones…like the other works here the main point of the thing was all in the playback in the installation…very carefully positioned speakers in an very large empty room…music played at just right degree, correct volume (Julius was a stickler for details in just about everything, including weight of paper in which his work packaged), to pass on a certain perception of space to the listener. And a feeling of stillness. This stillness and serenity is another keynote to understanding the work of Rolf Julius, and is articulated clearly in the notes here by George Thomas. Rolf Julius believed that there were spaces of tranquillity all around the world, if only we had the available senses to find them…inner peace could be shared by means of art and music…this is a very encouraging message, given that modern life seems to be doing everything it can to destroy peace, quiet, privacy, and the joys of the interior life…but it’s also fair to say that these “spaces into which one can retreat” are also a private thing, a state of mind and being which the individual must work hard to attain. To assist in developing your own private Nirvana of peace, start with this release. Arrived 10 May 2012 and released 12 June 2012.