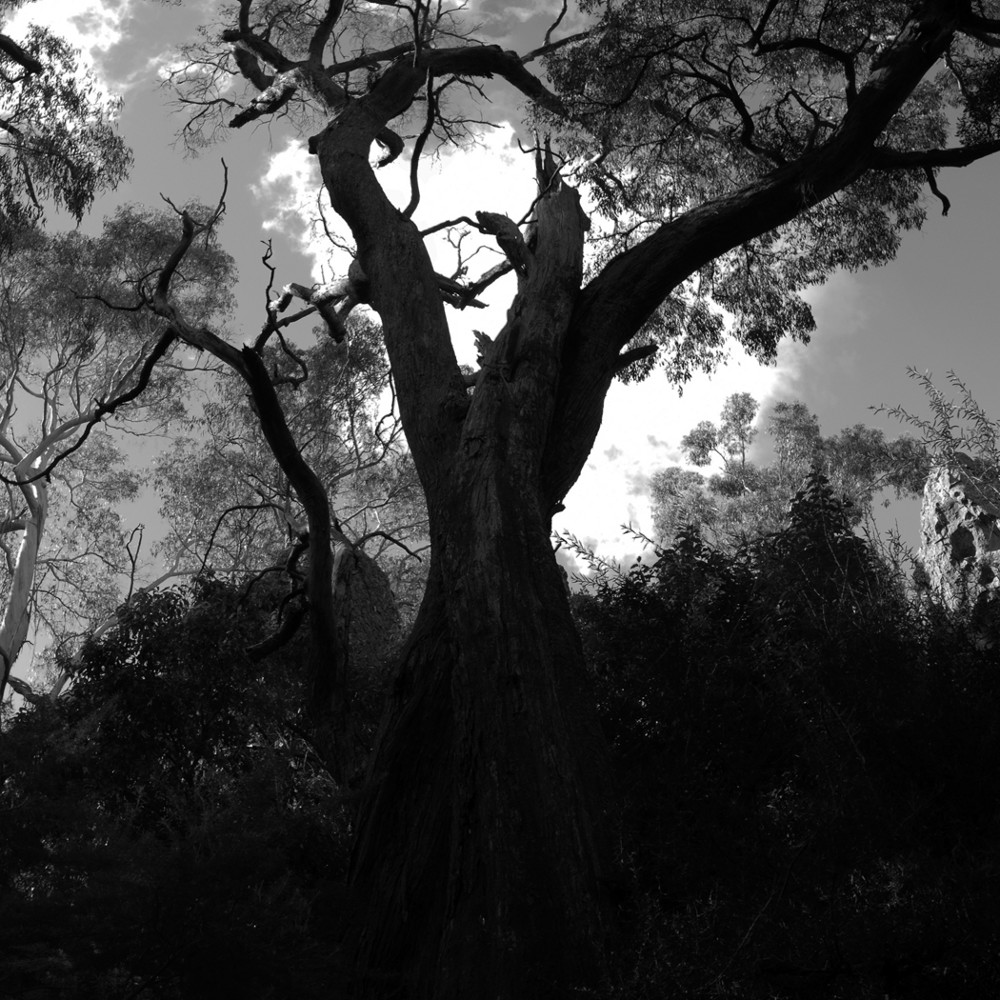 Cicadan is a recent black metal act based in Cobram, located on the Victorian side of the Murray River in southeast Australia. Helmed by Shamus Toomath, Cicadan plays doomy black metal with ambient, drone and experimental / abstract music influences. “Mother” is the debut album, featuring three tracks whose titles suggest a description of a 24-hour period  somewhere in Australia during a time when European settlers were yet to arrive and change the landscape forever.

Cobram’s Wikipedia entry says its climate is a Mediterranean-type one with hot dry summers and cool wet winters averaging 300 days of sunshine a year. This balmy background would hardly favour the rise of black metal bands, let alone one as intense, powerful and sullen as Cicadan. Yet this first recording is a dark and smouldering one. The album is a creature of its surroundings: each track is topped and tailed with field recordings of the natural environment of Toomath’s home town. Chittering birds and insects like cicadas, from which the project obtains its name, and the deep stillness of the Australian bush form the underlying inspiration for the music. Something of the flat expanses of the Australian continent is captured in the album’s more meditative moments. Lyrics in all three songs hint at the endless cycles of life and regeneration of nature in a long history.  Something about the lyrics reminds me of Al Cisneros’ writing for Om: it’s a bit hypnotic and a little remote, and there’s a hint of change that leads to a heightened awareness of nature’s connection to the cosmos.

“Day” has a hot and dry start of insects chirping loudly and birds sheltering in the tree canopy. The acoustic guitar introduction is lethargic under the weight of the heat. It soon weighs into the steely acid grind of the black metal guitar which falls like heavy rain across the sonic landscape. The pace is slow and majestic with powerful droning doom guitar and an ugly chanting BM vocal. “Dusk” is similar to “Day” in its basic structure: a soft melodic guitar introduction builds into a shimmering and malevolent piece with spiky lead guitar solo melody and muttering demon voice. Droning riffs add some variation and tension to the music. The track is creepy with a regular loop of reverb-touched clicks appearing early and gradually coming to define the song’s structure and atmosphere. It all becomes post-rock in a way reminiscent of the Cascadian black metal scene with a choir of ghostly voices and the sounds of nature following a melancholy lead guitar tune.

The real glory of the album is “Night (Dendronic Pessimism)”, the shortest of the three songs but the most varied and atmospheric. It’s very powerful in its long booming drone riffs against a background of burning black metal rhythm guitar. Quiet acoustic banjo or mandolin-like strings with night-time ambience and a spoons percussion rhythm feature for a brief time. The piece fades into crackling fire.

With a sound palette that includes BM-guitar rain showers, huge deep sonic bass booms and competent drumming that doesn’t appear to be programmed, Cicadan has a rich foundation for his music to really soar. At present the songs here aren’t greatly different from one another in their basic elements and structure, and their differentiation lies in the field recordings and the quieter, more introspective acoustic music sections attached to them. There is huge potential for Cicadan to become much bigger and more well-known outside Australia but he needs more music composition practice. Writing music in conventional song structure formats might be worthwhile to enable him to understand more about building up tension and emotion to maintain listener interest, and to appreciate better the freedom and limitations that unconventional music structures have. Sometimes in order to break the rules, you have to know and obey them first. A couple of tracks on “Mother” don’t have very obvious climaxes and the music starts to tail away too soon with the result that endings seem to take forever.

If Cicadan can improve his music composition skills and gain experience playing the music live, he will be an unstoppable force in Australian black metal, the equal of acts like Elysian Blaze and Striborg in their intense and idiosyncratic approaches to the genre.