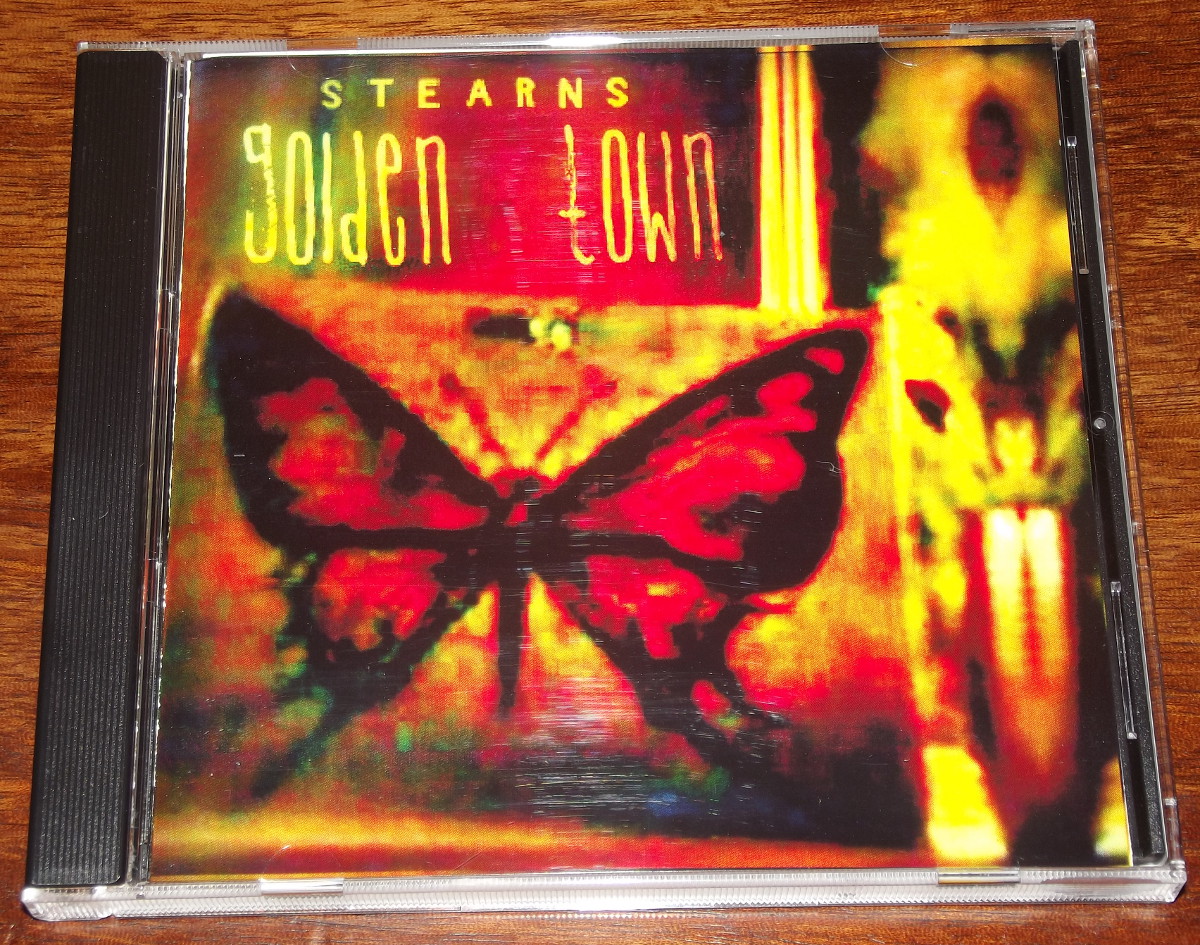 Composer Daniel Stearns freely owns up to the peculiar mental state of “dissociation”, which manifests itself as unusual occasions or experiences in his life from time to time, strange visitations which have descended upon his psyche since as long as he can remember. He takes heart in the fact that other mystics, scholars, writers and musicians in history appear to have been subjected to similar episodes, among them William James, Emerson, Charles Ives, Sigurd Olson and the Outsider artist Adolf Wolfli. Now on Golden Town (SPECTROPOL SpecT 03), he attempts to find musical expression for the semi-visionary outlook he receives in his detached states, and fourteen tracks of decidedly strange and distinctive music are the result. From the first track onwards, the music evokes mental detachment and an uncanny sense of world-going-wrongness before your very ears. Stearns was encouraged in his project not only by Bruce Hamilton but by the composer Steve Moshier, whom he met through online social media. The CD appears to be linked quite strongly to Stearns’ visual effluvia, a tack which leads us to consider his interest in lo-fi photography (typically using cellphones) to create singular images that appear to be suffused with more meaning and hidden depths than their original subject matter ever contained. Reading the compelling sleeve notes on this release does start to engender a not-unpleasant mind-sapping sensation, as though the layers of reality are starting to flake away and small chinks appear in the fabric that separates us all from the Great Beyond. The music / sound art on the CD is likewise quite unsettling, a queasy mix of semi-identifiable field recordings with wobbly electronic music and some intensive post-production techniques. At its best Golden Town does indeed come close to ushering the listener into the private world of Daniel Stearns, which he describes metaphorically as “an insular place at the far end of a dark wood” which he arrived at after “walking down a mountain I never knew I’d climbed”, with its extreme disorienting methods and highly dreamlike, somnambulistic tone. The label praises the “trance states” and “hypnotic pattern layers” of this unusual record. From 13 June 2012.

The lovely Dan Peck is the New York radical artist who has found the missing connection between jazz music and doom metal. He expresses this discovery using the tuba, playing in a trio called The Gate who we first heard on the 2009 LP Acid Soil with its great zombie skeleton cover. Now here they are again on Destruction of Darkness (CARRIER RECORDS CARRIER 015), Peck with his brass beast, the bassist Tom Blancarte and drummer Brian Osborne. Three lengthy tracks of depressing, intense and slow-moving sludge are created, almost unbelievably, through acoustic methods. I say “unbelievably” because in form and surface, this music is uncannily close to heavy sludge rock made with guitars and amplifiers. Stephen O’Malley had better look to his laurels! This micro-genre has been dubbed “doom jazz” by the experts, a fitting nomenclature, and The Gate do it far more convincingly than The Mount Fuji Doomjazz Corporation, even though the latter have the musical style embedded in their name. 1 If you like deeply resonant bass and sub-bass tones that can slough the skin off a Burmese python at fifteen paces, with enough presence to flatten a mountain range into Play-Doh, then this is the record for you. Peck’s method, which incidentally is composed rather than improvised and partly indebted to the work of Hungarian composer György Kurtág, is horrifyingly effective when set to a relentless march beat as on ‘Aeons Of Decay’, but also doubly fatal on ‘Frozen Gods’ where for the first half of its 23-minute stretch, the tuba just sits there and growls menacingly in jet-black rumbling tones, its bad-tempered sighs sometimes joined by the equally disgruntled upright bass sawing out snarls and grunts from the lower depths. It’s not just the glorious sound of this record that’s so compelling, but the way it contains all the nuances of improvisatory rapport and compositional structure that makes it so satisfying a listen. I suppose ‘Buried Blasphemy’ is the liveliest cut here and is the one to spin to your extreme metal-freak friends with their strange haircuts and pieces of metal embedded in their noses and lips. 2 If they arrive at the party clutching their boring records by Cult Of Luna, Neurosis and Mastodon in their heavily-ringed fists, then give ’em a dose of this monster and watch ’em drop dead. From 23 April 2012 and highly recommended.

When not working solo as TL0741, Pat Gillis is one half of Northern Machine with the bass player Bill Warford. The duo poured most of their energy into studio-based records for a while, until they found they could wreak their droning noise on stage and made a leap into releasing live recordings, staring with 2004’s Staalhertz. In Front Of The Crowd (HC3 MUSIC HC3NMCD9) is also live music, a compilation of ten examples of their craft made in the period 2005-2009, realised using keyboards, percussion, tape loops and various electronic effects; all the individual voices of these instruments, most especially the “singing metals” of Warford, do tend to lose some of their definition in the overall droney murk, sometimes resulting in rather nightmarish effects as the frequencies swirl together like nine types of liquid glue. I get the impression the pair are very good at working their way intuitively through the twin swamps of aggressive noise and effects-drenched drone, but the intention in the live work was to introduce some repeatable elements and a tad more structure to the enterprise. Unfortunately these good intentions appear to have succumbed to the compelling effects of loud amplification, and while the record has its moments of good solid assaultive chunkery and mysterious sojourns in a dreamy dark-ambient state, the music becomes quite samey and dull towards the end of the album. Despite the often compelling surfaces, I just don’t hear enough risk-taking or moments of real danger in the playing. One title at least, ‘Circuit Parasite’, seems indicative of their approach; one often has the impression of electronic equipment simply feeding off itself. From 13 June 2012.