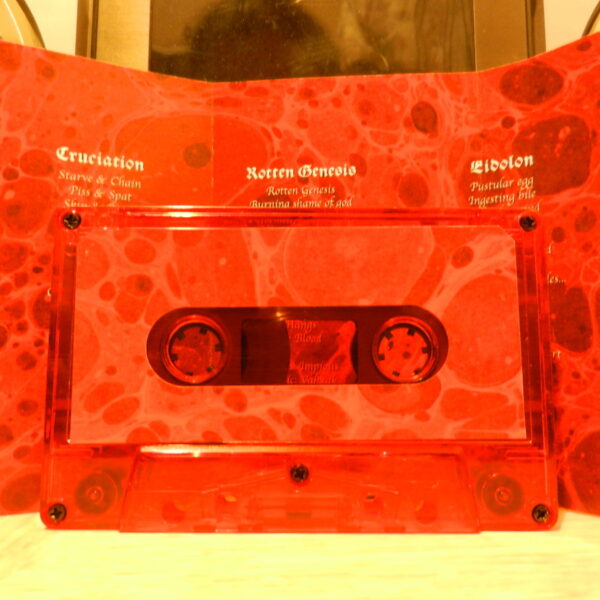 (Note: At this time of writing the EP’s third pressing of 300 copies had already sold out!)

At just over 17 minutes in length, this self-titled EP by the US band Muknal sure packs in heckuva load of black / death metal punch. This band is surely onto something deeply dark and evil here from the get-go: the music has a sick and disturbing feel and seems to come from the far reaches of the cosmos where time began. Muknal is one of a group of Californian black / death metal acts known as the Black Twilight Circle, many of whose members espouse Mexican nationalism and are keen students of Aztec and Mayan cultures and traditions. The bands issue their music on tape through several labels, the most notable of which is Crepusculo Negro.

As the EP goes so fast and it’s so short, the three songs that feature can be heard as one long work. “Cruciation” sounds like the soundtrack to an invasion of Earth if ever the aliens want something to celebrate and remember their victory for ever more: rhythm guitar and percussion push on in a steady advance while lead guitar spits out ghastly death rays of heat, each of which melts down entire fleets of planes and flotillas of ships in seconds flat. The aliens’ triumph comes in a matter of minutes. The next track “Rotten Genesis” is a varied piece for its size: starting out slow, steady and a bit stodgy, it quickly transforms into a mix of fast and slow music shot through with zinging blasts of extra-terrestrial lead guitar feedback.

The atmosphere is the stand-out feature of the EP: it’s unearthly and gives an impression of a huge universe, endlessly expansive, yet indifferent and most likely hostile to the evolution and presence of human beings. Dark forces emanate from the universe’s farthest corners to attack Earth and seek out and destroy us humans.

The tracks aren’t greatly different from one another although the first song is quite good for its full-on attack and atmospherics in its first minute. The third track “Eidolon” sometimes has quite complex and changeable rhythms and beats, and it piles on ever more suffocating intensity with furious fast-paced percussion workouts, blats of lead guitar and a howling demonic vocal overhead.

The songs feel incomplete, being so short, and a few extra minutes on each of them with extra lyrics might have bulked them up. As they are, the lyrics are very brief and general and vaguely describe spiritual and occult desecration and extreme violence: not much to see here, let’s move along. The vocals are filthy and sound reptilian. The EP actually could do with a slightly more murky, gargly and muddy sound.

Overall the music is energetic, often intense and most of the time very out of this world. The evil it calls our attention to is vast and unfathomable and while we can fuss about preparing to defend ourselves, this evil will surely defeat and obliterate us – it’s just a matter of time.

By the way folks, if you hear news of strange rumblings beneath the ground and oceans, and of people and buildings disappearing suddenly in giant sinkholes like the one that took that poor guy at home in Florida (some folks must have been praying to the Angel of Death to take George W Bush’s brother Jeb but the grim reaper must be hard of hearing with all the  supplications he receives from across the world to take out one politician or another as he took one Jeff Bush instead), that must be due to the awakenings of the hordes of the Dark Lord Cthulhu beneath the Earth’s crust in preparation to do battle with the Elder Gods coming here from the far ends of the cosmos. We have been warned!