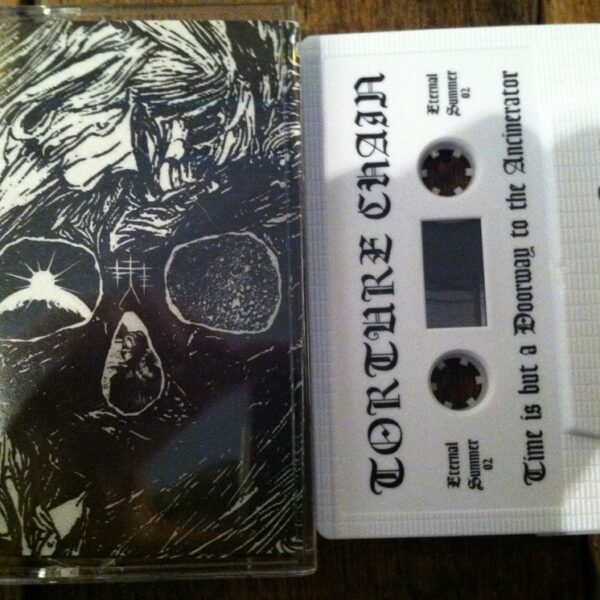 Torture Chain, Time is but a Doorway to the Incinerator, Eternal Summer, cassette (2012)

This US act has only released a few demos with long titles if not long playing times. The music is a raw punk-influenced straightforward black metal with no keyboards and no attempt at creating a particular mood or atmosphere. The introduction could be a creepy found sound recording of cheesy melodic synthesiser tone wash and a woodwind combination of clarinet and oboe tunes. It doesn’t last long: it’s swept straight into oblivion by a roar of hateful black metal guitar scrabble and frenzied drumming with overworked cymbals. Floppy drums pound out frantic beats and the crackly rasp of the vocal is frightful in its severe texture and malevolence.

Although the demo is dense and fast, individual bits are often distinctive: high-pitched lead guitar solos sometimes fly through the storm like electrical charges and riffs and rhythms change throughout. Rhythms can sometimes be jaunty and rhythm guitar riffs may have a very strong folk-martial feel in a style similar to the old French Black Legions band Vlad Tepes. About halfway through, the song recedes into a quiet acoustic guitar passage and is thoughtful and meditative before it gives way to a steady and relaxed section dominated by a repeating melodic guitar riff loop. The song speeds up into a fast and busy runaway train of repeating guitar riffs, steady drumming and haranguing BM vocals thick with aggression, hostility and pain. Rhythms and riff changes will continue for some time, then change either abruptly or subtly in ways that listeners won’t catch until too late and the riffs transform yet again into something else. Towards the end there’s an interrogation between black metal guitar and acoustic guitar and after the strings finish their Q&A session, the track relaxes into a fairly laidback rhythm. The music builds to a very layered conclusion of heavy rhythms and beats, noisy and buzzy guitars all careening towards a singularity, and more pained and quite demented vocals.

This is absorbing music with so many changes in structure and pace, and with lead guitar soloing that can sound quite conventional yet understandable in its context: when the rest of the music is so chaotic, noisy and has a harsh, gravel-like texture, the lead guitar needs a different sound and playing approach to differentiate itself and to introduce a new theme or a counter-balance to the music. As a result, sometimes the lead guitar sounds a lot more pure-toned, joyful and bubbly, and melodic than it should be. The aggression and toughness are obvious in the music; there may be quiet, soulful moments of delicate acoustic guitar tunes but these are few and far between. The title may be long and awkward but it expresses in language intended to shock that life is not pleasant and is full of pain and existential hollowness.

Released in cassette format, the cassette cover features arresting line artwork of what looks like black ink drawn finely on white background and then reproduced on a copier.