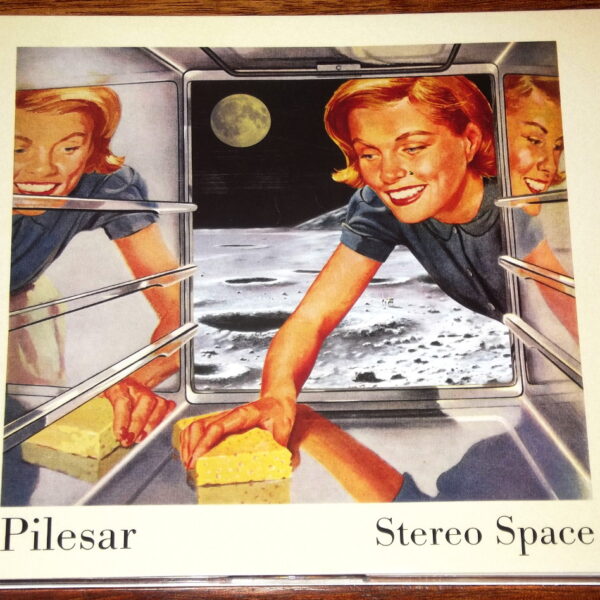 Piloted in the main by Jason Mullinax, responsible for vocals, keyboards, programmed percussion, most guitars and electronics effects on “Stereo Space”, Pilesar is a band of shifting personnel who create alternative mainstream melodic pop electronica of a sort that brings out the Devo fan in people of a certain generation. The songs featured here are short sweet affairs ruminating on aspects of modern life, particularly its disappointments and how small it can make people feel.

Early highlights include the reggae-tinged “Everywhere is Beauty” and the slightly dark, angsty “Wifestink”, both of which contain some unexpected but very unassuming gems in their rhythms, manipulations and subtle effects that suggest slight anxiety. From then on, the music sweeps by rather too briskly as though Mullinax insists on packing as much complaint into the space of 54 minutes as possible. A brief pause with an admission of emotional vulnerability appears in “Pinky Swear” but the song still feels hurried along, and a connection between song and listener only goes so deep (which is not much at all).

The mid-album sag inevitably arrives with songs notable more for fussiness or having that quality of you the listener having been there and heard that so let’s move right along to the next track. After doing time out in filler wilderness the album perks up with the instrumental “Things Break” which has some interesting texture effects snuck into the background. Final track “Are We Happy Next?” restores some semblance of the bright eccentricity and whimsy encountered at the album’s beginning but with that familiar air of being older, wiser and more guarded about the ups and downs that life always throws at you.

The album will be sure to pick up fans among its target audience of 20 – 30 years of age: the kind of people who enter the world factory bright-eyed and bushy-tailed with heads filled with ambition and wanting to change everything for the better but who come out of the sausage-making machines with dimmed spirit and perhaps bitter about what they’ve been through, railing at life’s injustices and never really questioning why the mass assembly line had to be there in the first place. But the paths “Stereo Space” treads though have already been heavily travelled by other pop acts, many of whom have done a far better and deeper investigation of the territory of emotions, relationships and disappointments experienced along the way.