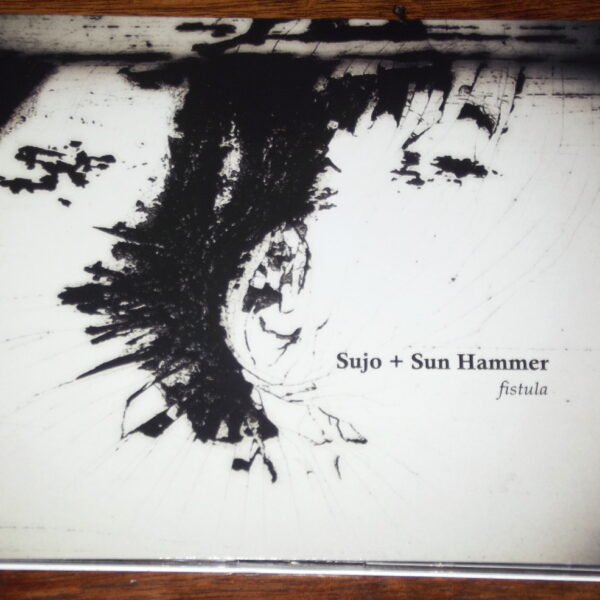 “Fistula” is a medical term describing a passage between two organs that normally aren’t connected and, while I think it’s one of those topics that inspire surgeons to tell each other war stories and jokes at post-conference cocktail parties, I can see the title is an apt metaphor for the music, a collaboration between noise / drone guitarist Sujo (Ryan Huber) and ambient soundscape designer Sun Hammer (Jay Bodley). Seven quite beautiful atmospheric tracks of shimmery guitar fuzz and buzz drone, digital noise, musique concrete, industrial, ambient and post-rock are featured here. The various genres weave from one to another to create a network of passageways that result in a complex and temperamental sound beast of many unpredictable moods.

All tracks can be heard as movements (heh-heh) of one over-arching work or separately. Though they all include noise and drone as essential elements and can be harsh and abrasive in tone and volume, several tracks (especially later ones) can be very serene and blissful. From track 5 “Hari” onwards, the music can be introverted and brooding with little attempt made to find a way of resolving the darkness and tension arising from deep within its wells.

The album might not be as long as I’d like – a few pieces here and there feel quite cramped for room and time and deserve to be more expansive and exploratory – but the tracks exert a strong pull on the consciousness and quickly mesmerises and initiates the listener into its self-contained universe of sculptured noise / drone and moody dark ambience. The album has quite a distinct character, being energetic and strongly hard-edged in style in its first half before the aggression gives way to quieter and more introspective mood music.