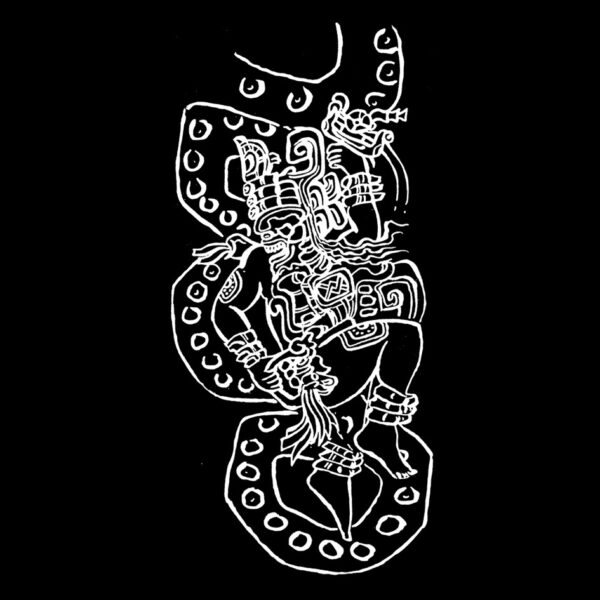 Belonging to the Black Twilight Circle of southern Californian black metal bands, several of which have Hispanic American origins, Kuxan Suum take a keen interest in exploring Mayan mythology and culture. This self-titled release is a compilation of a demo “Kinich Ahau” and another track that may or may not have been released previously on the (now-defunct) Crepusculo Negro label.

“Kinich Ahau” begins with a beautiful trilling guitar melody that becomes bleached in its tone and the echoes that build up and reverberate through your skull.   Soon enough the guitar melody gains a bleached-out acid psychedelic reverb edge that makes you see weird day-glo lime-green / hot purple / sky-blue cartoon colours in your mind. The echoes climb higher in scale until your ears almost bleed from the shrill, near-screechy edge.

The rhythm section joins in the fun and quickly a phantom vocal starts to screech and howl in the background while guitars and drums go hell for leather to their inevitable fate when they must surely disappear high in the cosmos and become part of its eternal fabric. About the halfway mark the track reaches a plateau and the pace slows down so the music coasts along while the weird bubbling and gurgling noises whirl wildly about in your brain and the vocalist groans and sighs as if suspended in an ethereal fluid bearing him to another plane of torture. Guitar shimmer and reverberation continue with the tone milked for all it’s worth.

The track continues on and on, escalating in derangement and intensity … I think you can tell where it will end, it ain’t gonna be peaceful … the heart-rending screams go on and on … sure enough, everything is rent apart and the very atoms and sub-atomic particles are cut asunder and dissipated throughout space until all is null and the universe carries on as if nothing ever happened.

The second track “Principle of Harmonic Resonance” is a deeper, meatier piece, more death metal in its orientation, and with clearer and more definite vocals that are fairly up-front in the music. The guitars have sparkling jewel-like tones that enrich the song together with the faint ethereal background synthesiser. Although the song doesn’t soar as screechingly high as “Kinich Ahau” and is a darker piece, it has its own far-reaching charm especially just after the halfway mark when, for a couple of minutes, it threatens to take your brain apart cell by cell by its mesmeric tones. Changes of key take the track into some dangerously interesting and interestingly dangerous by-ways that seriously mess with the brain. This is a place where you might want to stay forever: lead guitar is bewitching in its melodies, the rhythms are crisp and no-nonsense chunky, the synthesiser is keening away in sympathy with the vocalist whose raspy voice swings from pity and sorrow to derangement and despair at the madness creeping over him.

Both songs deserve a wider audience for their fusion of spaced-out ambient psychedelia and black / death metal taken to the genres’ extremes. Listeners are led, willingly or unwillingly, on a major voyage through multiple levels of existence to an absolute revelation, beyond which there may only be annihilation. There must be a link with Aztec or Mayan mythology here: perhaps the songs take as their inspiration the journey that souls of people who have died of natural causes make after death through several layers of hell to reach Mictlan, the Land of the Dead, where they dwell in nothingness forever.