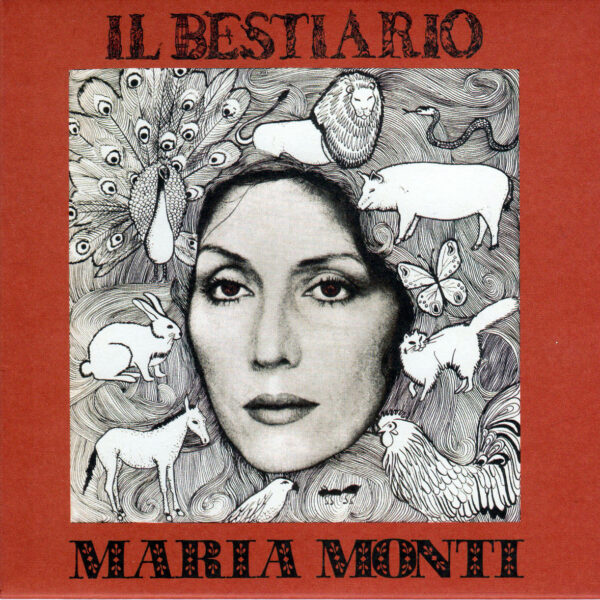 Exotic item of the month comes from Maria Monti, the Italian actress and cabaret singer who has a film career going back to 1962 and had a starring role in Leone’s A Fistful Of Dynamite. The album Il Bestiario (UNSEEN WORLDS UW08) was a 1974 showcase for the assured and unusual vocal mannerisms of this Italian chanteuse, whose nearest equivalents might be Lotte Lenya or Gisela May. Monti clearly had this unerring ability to interpret a song through acting it as much as singing it, and her wiry acrobatics on this album are just amazing to hear. There’s a real clarity of intent and meaning in Maria Monti’s singing, which is rare; not a single fudged word or a smeared note. Listeners who enjoy authentic craft in song delivery are in for a treat, and may want to start looking for her 1972 double album Memoria Di Milano for further examples of how she might approach cabaret, chanson and ballad styles. But beyond the technical ability, we are struck by her emotional range, the sharpness of her observations. On a song like ‘L’Uomo’, even to non-Italian speakers, there’s no mistaking the meaning of the lyric from her no-nonsense and slightly world-weary tone. It genuinely is one of those songs with a theme the whole world can recognise. And there’s also the poignant and nostalgic beauty of ‘Aria, Terra, Acqua E Fuoco’, with its understated acoustic guitars and piano arrangement, a yearning piece sung with a crystal-clear purity that could bring an ache to the hearts of all the statues in Lombardy. On this account, I suppose Jacques Brel or Scott Walker come to mind as similarly tempest-tossed souls performing a balancing act between detachment and compassion, attempting to resolve their personal test-tube full of conflicting feelings and mental storms. But few performers have the grace or poise, the understated power, of a Maria Monti.

The other point of interest to us here is the credit roster: Alvin Curran, now widely known for his very extreme synth experiments and avant-garde compositions, did the arrangements for the album and contributed synth backdrops, and Steve Lacy (soprano sax) is one of the session players – along with two guitarists and a baritone sax player. While the results may not be the wild mix of MEV with free jazz this combination might promise, it is still an unusual-sounding record with some daring and startling dynamics in evidence on tracks such as ‘La Pecora Crede Di Essere Un Cavallo’, a stark and bony thing which is almost like a more approachable version of John Cale’s production for Nico. And ‘Il Serpente Innamorato’ is a dramatic tour de force, a slice of apocalyptic poetry-recit and crazy mutant cinematic music compacted into two and a half minutes of precision-tooled mayhem. Slices of sonic art like this ought to make Il Bestiario a must-have item for fans of art music, soundtrack LPs, chanteuse records, and the cinema of Jess Franco. Maybe it’s some kind of missing link between all of these strands of buried wayward European madness. The producer was Ezio Leoni, a titan of the Italian music industry who’s been involved in the production and arrangement of about two hundred records from the late 1950s onwards. This was released in June 2012, a limited pressing, and sorry to tell you it seems to be sold out already from the label, but surely must be available somewhere. Highly recommended.