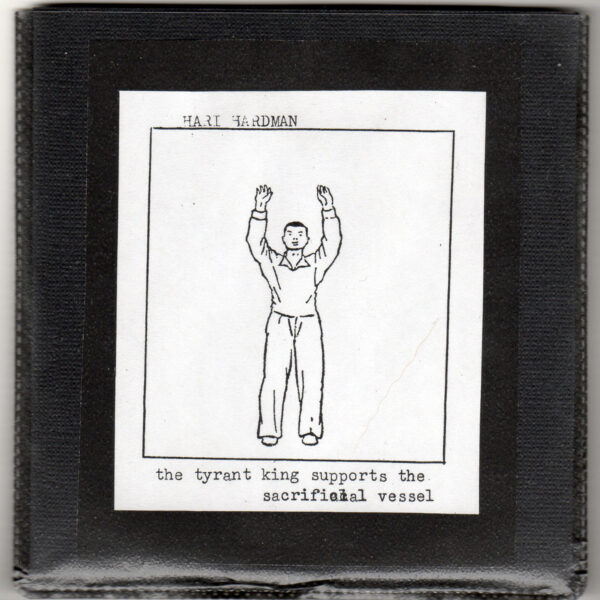 UK marginalista Hari Hardman‘s cleverness consists of stating his themes in short bursts of electronic drone-noises that stimulate the mind for only a few minutes at a time, in contrast with many excess-merchants who overegg their puddings and outstay their welcomes. The Tyrant King Supports The Sacrificial Vessel (HARI HARDMAN PRODUKTS HH0024) is more approachable than his earlier harsher burst-a-plosions, and indeed you may enjoy losing your way in the curvulated paths he maps so eccentrically. Highly generous on the absurd visuals too, booklet and insert produced with high-contrast photocopier and typewriter technology. (25/07/2012)

Puzzling thing sent from Sparks, Nevada in the US, maybe from Isa Tanaka. The name of the act and CD are rendered in runes I cannot reproduce, and the tracks have odd names such as ‘Rakine Hugoniot Relations’, which perplex. The front cover states “Ambients”, but this may be misleading information. On the CD are the most enigmatic stretches of low-key white-noise hoover-drones I have heard for a while. Some are possibly environmental in origin (a clinical shopping centre mode), some have vaguely musical elements. May seem unappealing, but I enjoy its inscrutable continuousness. (24/07/2012)

UK composer Martin Ayres has produced his Harmogram Suite (BURNING SHED BSHED0111) as a 5:1 surround sound DVD and as a regular audio CD. Not one to stint on hard labour and meticulous assembly, his work contains 140 layers of overdubs, with all parts played by Ayres himself; he’s also paid close attention to recording methods, set-ups, and different playing techniques, the better to simulate the richness of a full orchestra on this one-man show. Languorous strings drone slowly, and the work is suffused with melancholy astringency. (03/08/2012)

Mika Vainio will be an electronic musician I personally associate with a time in the 1990s when electronica was punchy, abstract, and brutal. His FE304 – Magnetite (TOUCH TO:86) thankfully contains some trace elements of these desirable features. With six track titles that incorporate the word “magnet”, he may be trying to tell us something profound about the world, even more than these stark, ultra-dynamic throbbers of pulsant noise reveal on first spin. Angry firebursts, puzzling silences, eerie distilled silver tones, deathly precision. An air of stern grimness abounds for album’s length, which is fine, but Vainio also relaxes into pedestrian mechanical drone once too often for my liking. ‘Elvis’s TV Room’ is a great title though, and it’s a good piece of mausoleum music too. (19/07/2012)

An uncanny oddity of terrifying beauty is Polin (MATHKA NO NUMBER) by Ireneusz Socha. Produced just with sampler and electronics, plus the voice of Jaroslaw Lipszyc and the bayan of Jaroslaw Bester, it tells you more than you want to know about Polish and Jewish history, and does so in just 20 minutes. An intricate “hörspiel” miniature, it took Socha several years to complete, which is unsurprising as, at the core, it’s a detailed assemblage of samples borrowed from a sound archive. Religious and political themes underpin the work, blended with speech recordings and cabaret or klezmer music, but ultimately it’s a transcendent art statement that takes the listener on a profound and fascinating journey. Bolstered with a concise essay “An Uneasy Rest” written by the composer. Very recommended! (13/07/2012)

Fêlure (ORGANIZED MUSIC FROM THESSALONIKI T18) is an item from two maestros of the school of non-musical object-based minimalism, Pascal Battus and Alfredo Costa Monteiro. Battus has done great things with his strange droney sounds based on “rotating surfaces”, which I assume are decommissioned potter’s wheels and broken cake-stands. Monteiro has taken his reductionist philosophy one stage further by playing “amplified paper” on this album, an action which presumably involves rubbing or stroking the grain in interesting ways. Atmospheric creaks, haunting hoots and sibilant rumblings abound. (03/07/2012)

Worsel Strauss decided one day to surrender his will to the way of the machine, and produced the music on Unattention Economy (VICMOD RECORDS VMDL16) using self-generating electronic devices including a Buchla synth, along with a deliberate refusal on his part to interfere with the pure course of automatism. The liner notes robustly defend this approach, ruminating on the psychology of fear and ideas about loss of control. Lest we think the resultant album is a sprawling mess of doodling synth noise, in reality the process has been carefully refined through listening and editing. Strauss found that the set-ups were incredibly labour-intensive, and even more work was involved in finding strong moments of structured or partially-structured music buried among the hours of chaos he recorded. His strenuous efforts are reflected in the 12 shortish tracks we now hear, some of which are quite good. I’m all in favour of editing, but doesn’t that strategy somehow undermine his “loss of control” philosophy? (04/07/2012)