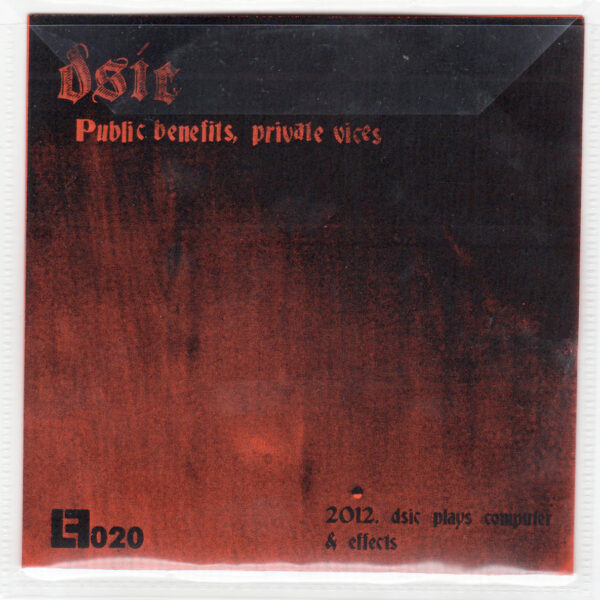 Loopy and intense noisy jazz rock blurt from Cactus Truck, a trio which showcases the saxophone malarkey of John Dikeman as much as the tangled guitar lines of Jasper Stadhouders, while drummer Onno Govaert urges these two rabid loons to propel themselves over the cliff edge. Their album Brand New For China! (PUBLIC EYESORE NO. 119) has a ten-minute opening salvo which will let the listener know instantly if they’ve the stomach to stick around for more of the same. These “spiky” fellows have caused much agitation in and around Amsterdam where they are based (this was recorded in a Netherlands studio), but many improvisers and veteran jazzmen on the international circuits also tip their hats to Cactus Truck. They make sure to put on gardening gloves first, though. I’d like to report a melange of Albert Ayler lines on top of Beefheartian blues rhythms, but their ultra-aggressive music favours surface sound and technique over structure. Not that you’ll notice as you succumb to the joyous free energy on offer here. (09/07/2012)

From the Belgian duo NDE we have Kampfbereit (COLD SPRING RECORDS CSR146CD), their second release which in typography and cover art at least is “disguised” as a Black Metal album, but turns out to be a wild experiment in suffocating, extreme noise – situated in the “Death Industrial” sub-sub-genre, as the press notes would have it. As they hurl around their buckets of distortion, hammering percussion, and excessively filtered screaming vocals, NDE also prove they can do dynamic changes pretty well, and the album is designed almost purely as an extreme listening experience, where we are given few clues or map points and the listener’s imagination must work hard to process the scrambled information. A few quieter tracks paint “bleak and empty” vistas of desolate misery, but most of the content is simply intolerably repellent and over-layered loud noise. A painful and torturous journey to the depths of a Pandemonium-styled Hades. (28/07/2012)

Is it too early to say Northern Spy Records are taking up the slack from ESP-Disk? The latter label used to make a point in the 1960s of signing up eccentric performers from rock’s margins, some of them recruited direct from the street, and gradually made history thereby (even if they sold few records at the time). I’m getting a similar vibe from Diamond Terrifier, although my impression is based largely on the photo inside the gatefold of Kill The Self That Wants To Kill Your Self (NORTHERN SPY RECORDS NSCD026), and I may be misreading it completely. This odd record is a one-man show by Sam Hillmer, who exhibits untrammelled raw passion when playing his saxophone, recorded in strange ways and at strange times, with minimal (or zero) accompaniment. That woodwind instrument has rarely sounded so other-worldly. It’s not just microphone placement, either; Hillmer is reaching down into a very deep personal place to extract these hollow bellows and loosing them into the ether like mind-drenching fog clouds. Diamond Terrifier, who cutely expresses his name as <>T, is a truly original primitive. This is his debut record; will the world allow a second release? P.S. – the fauvist version of the American flag on back cover is a nice touch, clues us in to the “alternative” universe of Mr. Hillmer. (19/07/2012)

Blindshore is James Adkisson, a Texas guitarist who used to play in Seven Percent Solution. Hollow (SELF-RELEASED) is a solo album on which he plays everything, and freely owns up to his influences – some of them rather conventional, such as Adrian Belew or Brian May, along with his first loves Fripp and Sonic Youth. The results are agreeable and competent modern rock music, but given his proclivities for progressive rock and melody (no bad things, I hasten to add), Blindshore is unlikely to be mistaken for a carbon-copy of solemn post-rockers such as Isis or Red Sparowes. Adkisson’s vocals are a tad thin, but he uses the singing voice as another instrument in his very thickened mixes, where no space is left unfilled and there is barely space for the listener to move. (18/07/2012)

Attacca are an improvising trio based in Berlin active since 2010, who declare O’ The Emotions! (SCHRAUM 15). Two German players, the trombonist Mattias Müller and the bassist Axel Haller, are joined by Canadian Dave Bennett, a refugee electro-acoustic student who has made his home in Europe’s financial capital and contributes guitar to the trio’s sound. Attacca seem to be all about the very rich sound they make together, rather than owing much of a debt to jazz or even improvised music, and don’t wish to draw attention to their respective techniques. Instead, we hear a compelling and integrated combination of tones and textures, with repetitions and patterns arrived at by very natural means. The ebbs and flows of this watery gelatin suck us in like so much quicksand. The “emotions” of the title are thus very hard to name or identify, and clearly they can only be processed by the players through their exploratory work. (12/07/2012)

More splendidly sickened and corrupted computer noise from dsic, the New Zealand expat who lives in Bristol and whose LF Records netlabel rarely disappoints. Public Benefits, Private Vices (LF020) is one of his more aggressive concoctions, seething with hateful noise for most of its duration, and feeling entitled to pummel the listener’s head with cruel buffets. When this punch-up with a street drunk subsides, we are left with curious passages of disaffected half-noise, which pulsate and sizzle like an angry insect poised to strike again. The only variations to the above scheme are found with the final track, a soothing potion of pure tones deployed in random fashion; and the curious voice loops which last for 36 seconds on track two. Whole album could erupt into violence at any moment, creating a tense and invigorating spin. When I grow tired of “polite” and well-manicured laptop music, I always turn to dsic, a man who’s never afraid to show his Samsung just who wears the pants in his house! (24/07/2012)

Just heard from Alfredo Costa Monteiro yesterday, and here he is again as part of an ad-hoc trio called 300 Basses, with Jonas Kocher and Luca Venitucci. Sei Ritornelli (POTLATCH P212) was recorded in late 2011 when the three of them were on a residency in Switzerland. Although I personally would welcome the formation of an orchestra of 300 musicians playing only the upright double bass (and hopefully doing so at the Hot Gates), the music of 300 Basses is in fact predicated on the accordion. Continuing to pursue his radical, deconstructionist approach to conventional instruments, Monteiro attempts to refashion the very workings of the accordion according to his own diabolical schemes, rethinking the respective purposes of the bellows, keys and buttons. If applied to to the fields of biology or zoology, I suspect his “what-if” approach would lead to his being banned under various international anti-vivisection agreements. The resultant horrors are laid bare on this extreme record, where to my ears the accordions simply seem to be begging for mercy under this cruel and unusual treatment. Still, that’s clearly the intention. Kocher used to make me a little impatient with his earlier slow-moving minimalist releases like Materials and Solo, but there’s a little more fire to be heard in this collaborative work. (09/07/2012)