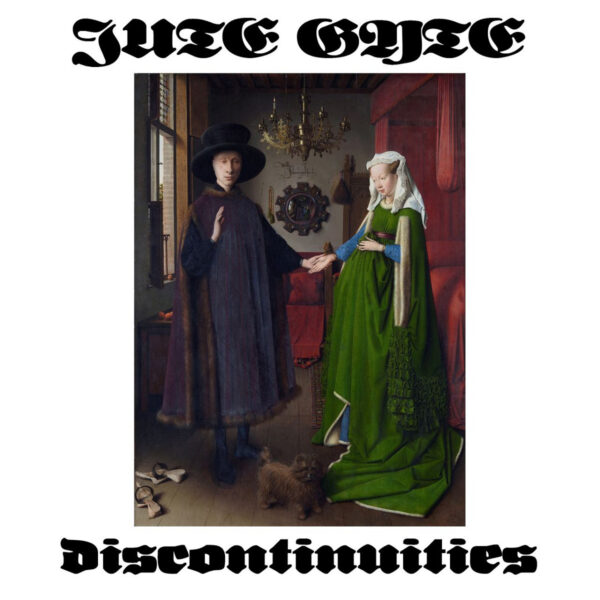 Jute Gyte is a very prolific act that has so far released 20 albums and a couple of EPs since 2007. For this album, JG man Adam Kalmbach had his guitar retro-fitted by Ron Sword of Sword Guitars (and Florida death metal band Last Sacrament) to accommodate a scale of 24 tones that enables our man to explore and play microtonal intervals. At last Kalmbach can break with his previous style of guitaring extreme industrial black metal soundscapes and dive into something even more extreme, hence a reason for the album’s title “Discontinuities”; other reasons will become apparent in this review.

Listeners will pick up the new sound straight away: on first hearing the album does sound highly discordant and cacophonous. It’s an organic sound though, one that comes across putting its feet right and not making awkward turns just for the sake of it. Other instruments on the album (bass, synth, programmed percussion) quickly fall in line with the new sound and my ears at least become accustomed just as fast. The music turns out to be as fluid and natural as Kalmbach’s own song-writing abilities allow.

The album describes a dense and hellish sonic universe in which familiar points of reference either no longer exist or are demonstrated to be bizarre and meaningless. The realisation that our paradigms of viewing the world and the universe are and have always been irrational falls heavily on us. Whether loud, defiant and brazenly noisy or subdued, Kalmbach presents us with the truth of our existence, hitherto inaccessible because of the limitations of previous musical tools we had, and that truth is not at all pretty. Lyrics of tracks like “Night is the Collaborator of Torturers” and “Romanticism is Ultimately Fatal” force us to acknowledge the ugly consequences of our delusions and self-cocooning with cultural myths, propaganda and groupthink. After the instrumental title track, later songs focus on decline and death in a world collapsing under the ruin we have inflicted on it.

Apart from the title track which is a minimalist guitar groan-drone affair, the songs tend to sound much alike: the basic structure for each track consists of several repeating riff loops. On all tracks the barking vocal is thin, harsh and ragged. The programmed drumming takes a distant second or third place to the other instruments and sticks to keeping time and setting the pace: this prevents the music from becoming bombastic

The whole work is bleak and relentless. Probably parts of it could have been edited for length as the guitar sound is so dense and demented that the music actually does not need to rely on repetition and length to accentuate tension. The sound can be a bit flat as well when there is excessive looping of riffs. Only on the last track “Acedia” does the music start to mix volume and mood dynamics: blaring metal guitar noise insanity is punctuated with short quiet and contemplative moments.

This might be one album that doesn’t get much play but when you do spin it, it’s highly immersive and confronting, and it’ll fair clean your head of the petty issues, fears, lies and obsessions that trouble everyone else and keep us all enslaved to The Man.