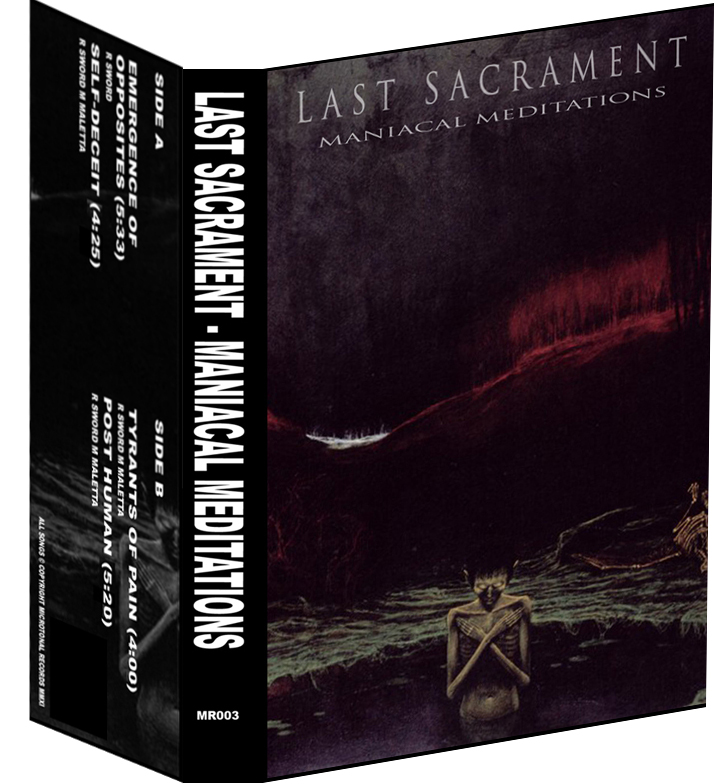 In my immediate previous review (Jute Gyte’s “Discontinuities”), I mentioned that JG man Adam Kalmbach used a guitar that had been retro-fitted to accommodate a 24-tone scale by Ron Sword who happens to be guitarist for a Florida death metal Last Sacrament. This band uses a 16-tone scale to play its particular brand of extreme precise death metal. At this time of writing, Last Sacrament had only this demo release to their name; a full-length album “Enantiodromia” is in the works with a release any day now.

On first hearing, the 4-song set appears no different from most maniac death metal – probably because my ears have heard a fair amount of microtonal music in the past so the quirky aspect is lost on me and much of what I hear is deep slurping swamp-monster vocals, militaristic blastbeats and grinding bass against a steely cavernous background. On second hearing though, the difference becomes apparent: it’s in the band’s sound which is deep and oily, and in the dream-deranged chaos of the lead guitar breaks.

“Emergence of Opposites” can be a fairly flowing track with near-flighty percussion breaks and squalling lead guitar that literally takes listeners into another sonic dimension. “Self-Deceit” is slower and for its first half unremarkable DM; it’s only when we reach the lead guitar instrumental that once again we’re whacked clean round the bend with other-worldly flighty guitar melodies. Oftentimes these sound more like analog synthesisers or special effects cooked up in the past by the BBC Radiophonic Workshop for old Doctor Who TV programs.

“Tyrants of Pain” features extended passages of flowing yet demented screaming guitar trills and tones that wash and flush out the brain cells like nothing I’ve ever heard before and will probably never hear again. “Post Human” sees the band lifting its game for one last shot of lavaging those quivering synapses: crunchy bass rhythms and insane nuclear-powered percussion go all-out to support the lead guitar which now flies around the shop like a posssessed demon pursued by other possessed demons whenever chance permits.

I suppose this being the band’s first release, “Maniacal Meditations” needs to err on the conservative side and let everyone know that this is a death metal recording first and foremost and experimental music second. For the most part the innovative aspects are kept strictly on the leash and are let out now and again but only for short periods. The lead guitar does its whirling-dervish dance at some distance far in the mix on most songs: I do not know if this was intentional or just a quirk the musicians hadn’t anticipated. The level of musicianship is consistent, precise and very much what should be expected of technical death metal. Likewise, the lyrics aren’t out of the ordinary for death metal, dwelling on humanity’s failure to safeguard its freedoms and prevent its fall into enslavement followed by society collapse and planetary apocalypse.

Even so, a track like “Tyrants of Pain” demonstrates in a couple of short instrumental passages the potential for extreme microtonal death metal to race off in the exotic outer-realms of hell, space or other virtual dimensions. I’d like to see these guys adopt a far more improvisational and experimental approach in their music so that they can bring out the full potential of microtonal music in an extreme metal setting.