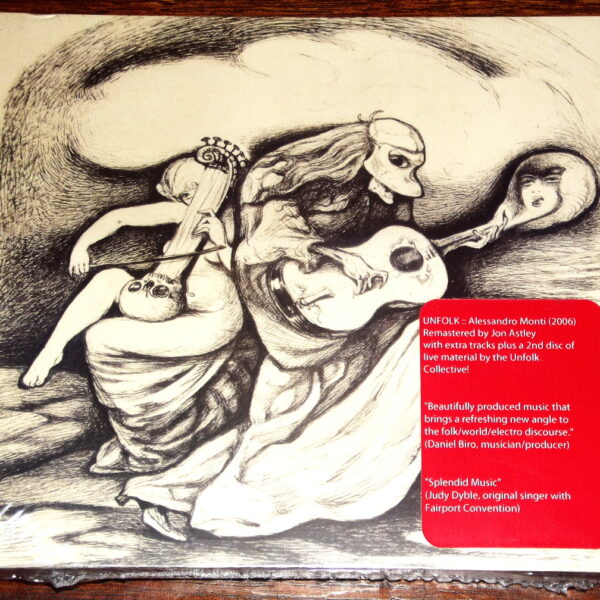 News reached me the other day of a young software engineer Amanda Ghassaei who etched a Radiohead album with a laser cutter on a wooden disc. She’s also etched other audio recordings onto acrylic and paper. Phooey, you all say, a wooden music-playing record has been made before. WHAT?! I had to find out and sure enough one Heracleum Ipotesis had done it way back when in the High Middle Ages to preserve his “unfolk” music compositions – or so says one Alessandro Monti who with his Unfolk Collective music combo have had their “Unfolk” album from 2006 remastered and reissued with a bonus CD of reworked songs from a previous album “The Venetian Book of the Dead”.

Most tracks on the remastered “Unfolk” disc might have Italian-language titles but the music draws influences from Irish folk music traditions, Indian ragas, Arab and Venetian mediaeval Venetian lute music among other music genres. The journey through the disc is an interesting one: it’s as much a tour through Western contemporary popular music turns on “folk” and tracks like “Aerofolk” feature mind-expanding space cosmic music played on electric guitar, synthesiser and other electronic keyboards, giving a soundtrack that wouldn’t be out of place in the corpus of works by the likes of Can or Amon Düül 2. Speaking of “Aerofolk”, I think that’s becoming my favourite track here the more I listen to it for its sense of wide-eyed wonder and joy in exploring inner and outer space. Generally the happier the music on the album sounds, the better it is; the music that’s melancholy, brooding or contemplative tends to come across as a bit ordinary. One curious coincidence I note is that the violin melody on track 11 matches, note for note, the violin tune on Swedish 1970s space / folk rock group Älgarnas Trädgård’s song “Children of Possibilities” from that band’s first album; I think it’s likely both bands have used the same mediaeval tune.

Disc 2 “Live Book” sees a different set of musicians around Monti playing live in Mestre near Venice and in Leicester in 2011. About half the tracks from “The Venetian Book of the Dead”, referring to the workers and people who lost their lives to cancer and other diseases as a result of industrial accidents in areas around Venice and Mestre during the 1970s and 1980s, appear here. Subordinate to the lyrics, the music adopts moods appropriate to their message: dark, smoky and urgent (“Someone is always screwing someone”) and blunt, blaring and impassioned (“Forgive”). The best track here though is an excursion into a nostalgia for various 20th century music genres that had their roots in Afro-American oppression, poverty and despair: “Bedroom discotheque” gets its soulful, wistful emotion from the beautiful acoustic guitar and electric cello melodies and changes in key that bring an extra layer of dark desperation to vocalist Kevin Hewick’s singing. Through repetition of the lyrics, Hewick tries to push back an enormous and relentless advance of ice that threatens to wipe out an entire structure of music historical and cultural memory. His lyrical venture into hiphop to me seems awkward and ill-advised though, as if he can’t quite figure out how this music, born in poverty and violence-ridden ghettoes, and others like it came to be unashamed whores for the global music industry. (I can’t figure it out myself either, having felt estranged from hiphop and rap since the 1980s when the commercialisation of the genre began.) The music is a mix of unfolk, blues and rock with a slight dominance by electric guitars and other electrified musical instruments.

Some very good music is featured on both discs but there are also passages of quite stodgy instrumental music, especially on the latter half of Disc 2 where the music takes a more pessimistic and embittered turn with tracks like “The radioactive man”. Monti’s quest for social justice in his music hasn’t quite reached the stage where he might start tackling the true sources of oppression in our society, going after banks in their usurpation of control of global economies and their links with corporations across the world including the arms industry, and the media, both “conservative” and “progressive”, alike for pulling huge chunks of wool over our eyes.  I’m hoping he’s moving in a direction of calling for people to take back their power and do whatever they can under their control, no matter how small or petty, to create or recreate a fair world.

In an age in which most music produced these days is under the thumb of global media corporations and even the music of traditional societies from the past or in the current present is shaped and packaged by the music industry as an endless array of exotica, divorced from its original contexts, for consumption by tourists, Monti’s concept of unfolk music may be intended as a challenge to such concepts.