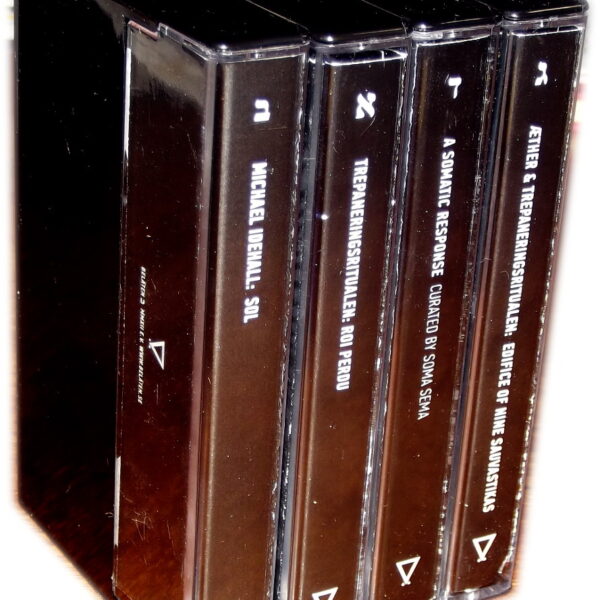 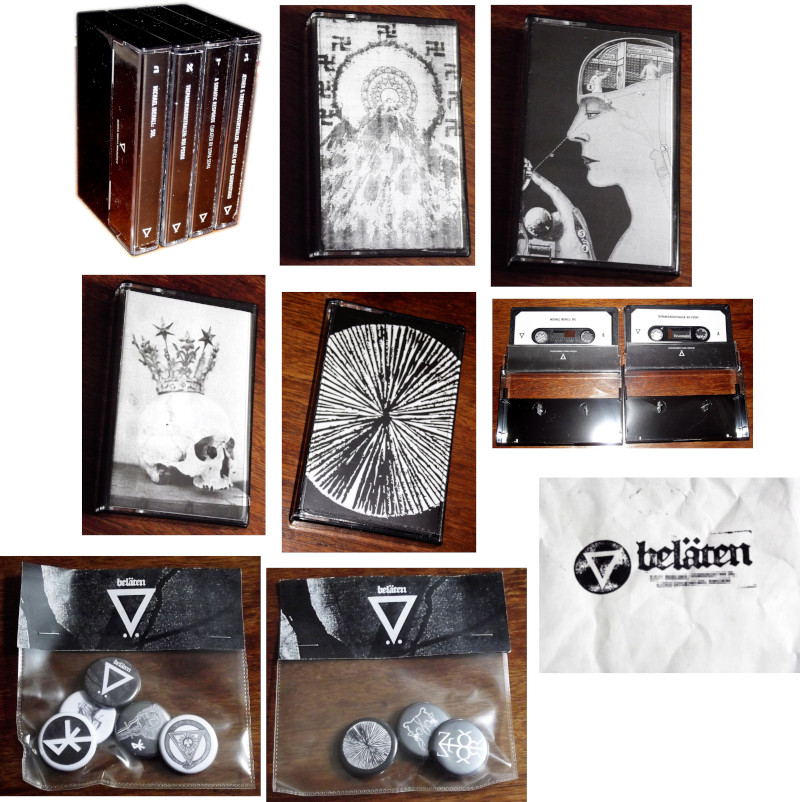 Four cassettes from the Swedish Beläten label sent to us by Thomas Martin Ekelund, who may also be the label boss. Beläten produce “post avantgarde pop” and align themselves with things apocalyptic, transgressive, esoteric, and pagan. Even the catalogue numbers are somewhat recherché, using characters from the Hebrew alphabet. Industrial music has clearly cast a long shadow since 1979. I seem to be one of the few music fans who never heard a single record by Throbbing Gristle but I continue to experience the long-tail fallout from that cultural event, as reflected in tape bands like these. Even the fact that they express a preference for cassette tapes is a statement, expressing allegiance with the “glory days” of tape trading and mail art of the early 1980s. And guess what…the label is based in Gothenburg, home of the finest gloom music in all of the Nordic realms. All of these items (which arrived 20 July 2012) existed in tiny editions of 50 copies and have probably all sold out, although downloads are available.

Michael Idehall produces 10 sullen, inward-looking episodes on Sol. Electronic pulses with a sinister bent are repeated with a single-minded dedication to monotony and dreariness, while a cracked and muttering voice utters its broken phrases, to create sensations and emotions very suggestive of an inner desolation and multiple disasters. To accompany these inner journeys, additional synths bark and toot in distinctly inhuman fashion, or provide snarling and sizzly textures to add to the general discomfort. The cumulative effect tends to present Idehall as a haunted figure cursed under a malevolent spell, a supernatural dimension which is not denied by the magick and pagan themes running through tracks such as ‘Snake Messiah’, ‘Serpent Wand’ and ‘Language of the Birds’. Clunky and hesitant in places, his music nonetheless creates powerful ceremonial effects with a Hammer Horror undercurrent.

Edifice Of Nine Sauvastikas is a split tape. Æther and Trepaneringsritualen each create a ten-minute drone piece dedicated to an esoteric reference, paying their respects to Yung-drung Gu-tzeg 1. Æther’s interpretation of the hermetic theme results merely in a plodding and overlong drone of rather wearisome solemnity, but I’ll admit there is a dynamic at work which allows a gradual build-up of slow-burning terror as reflected in the increased distortion and deepening of the tones, plus they manage to emulate the sound of chanting monks quite effectively. Trepaneringsritualen recently had a single out on Fang Bomb, and he’s a pretty cool doomster. In fact he’s also Thomas Martin Ekelund, the man behind this label and also the excellent Dead Letters Spell Out Dead Words. While that former incarnation was fixated on the afterlife in a semi-mystical and speculative fashion, Trepaneringsritualen is all about the futility and the doom – mixing it up with quasi-religious and supernatural elements to further add to the black cloud of uncertainty. As such, his work fits in perfectly with this label’s aesthetic. On the cassette he contributes a murky clashing percussive sound with layers of hideous grind and eerie whisperments, instantly evoking a terrible inhuman landscape. What strikes me with this track, and indeed all the music spun so far, is how it’s not afraid to stay in the same place, working obsessively with the same limited range of tones and sounds until they grind them into a handful of dust.

Now here’s an entire tape by Trepaneringsritualen called Roi Perdu. I should be careful what I wish for. What a nifty cover too, a simple skull with a crown on it, yet it’s an image that induces instant suicidal feelings with its stark message of futility. This one was originally issued by iDEAL Recordings in Sweden and constitutes a reissue. The album also has an intriguing theme, slightly more historical in nature as it explores myths and legends of medieval Europe. I thought it might be a dark ambient update on the Fisher King and the Golden Bough themes in The Waste Land, but it seems Trepaneringsritualen have their eyes on the Merovingian legend. Four tracks of increasingly abject futility, with the ultra-slow bleak music proceeding at a leaden pace with its processed ambient drones weighed down by four anchors stapled into its dorsal muscles. The voice elements, as is customary, are likewise treated until what ends up on the tape is the monstrous groanings of a tormented creature. This may not appear very engaging from my description, but Trepaneringsritualen (like most of Ekelund’s music) has a cathartic effect on the listener, and you’ll expunge many an inner demon if you can make it to the other end of this turgid field of grim murk. Of all items in this batch this one has the most cohesive vibe, a composition that is planned and sequenced for maximum effect.

A Somatic Response is a compilation put together by Soma Sema and featuring the music of Blitzkrieg Baby, Television Set, Vita Noctis, Club Amour, Kord, Lust For Youth, Goz Mongo Alliance, Xiu & Soma Sema. This is mostly variants and strains of minimal electro-pop music shading into a genre which I believe is called Cold Wave. Melodies, lyrics and vocals feature more prominently, and in many instances we have a self-important male voice chanting about alienation and coldness against the beat of a drum machine. But I do like ‘Slugs’ by Estroboscorpio with its twisted and poisonous synth lines, Makina Girgir‘s ‘Alpha’ for its sinister air, and the sheer shrieking insufferability of Nimam Spregleda‘s ‘Fire’. In distinction to the above doomy ambient music, this is more upfront, aggressive even…the underlying message of many songs is that we’re on our own in a cruel world and nobody will protect us from the forces of evil.