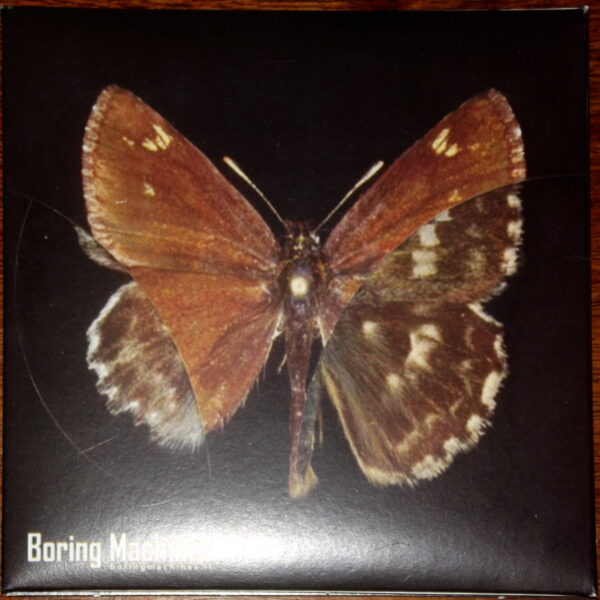 Two long, intense electro-acoustic interrogations from these two exploratory Italians. Instruments are self-built guitars, Revox tape machine and electronic devices. High-frequencies are the stated and actual order of the day. The approach is tightly focused and ruthlessly restrained for the most part. Ploughing determined furrows extruded filaments of frequency needle and itch. Mic-feedback whines are pushed through hair thin cracks. Constant high frequency level activity and agitation demands listener attention and denies any comfortable zone-out in the listener or the music.

The first track resembles a recording of an introverted dental drill in close proximity to, yet studiously ignoring, the cold metal curves of an anaesthetic gas tank. As it moves through its twenty-odd minutes the clipped and controlled high-frequency activities, presumably generated by the ‘electronic devices’ noted in the credits, are gradually, very gradually, joined by simple lower register frequencies whose tones start to beat against each other. Eventually these harmonic conglomerates start to acquire almost ecclesiastical shadings. The drones beneath the drill shift as this illusory organ adjusts its stops by itself before fading away to stark and simple high frequencies again without reaching any sort of conventional conclusions. This track has admirable scouring ability and should be appreciated by religiously minded dentists everywhere.

Track two, even longer at nearly half an hour, is another slowly unfolding drama incorporating many seeming wrong turns and cul-de-sacs, appreciation of the whole piece reveals an inexorable progress towards some sort of dénouement, however. Weedy high tones set the stage, beating and fluttering unstably against each other, pitch manipulation I assume is courtesy of the Revox tape machine. High mosquito-pitched tones are utilised, and then an almost melodious drone is gradually introduced, lending the piece a less restless and dissatisfied tone than that of the preceding work. The middle of this second track sees the introduction of some remarkably piercing tones which sound filed to a point and thin and flat enough to slide beneath your mental window casements. Tremeloed, reedy sounds continue to wisp and circulate around each other in palpable atmosphere of focus and tension, you can almost hear our intrepid dentists’ intent gazes. Little by little over its long course the track fleshes out into a (kind of) triumphant and (sort of) expansive mode, providing a more confident base for more pro-active frequency prods and what sounds like a rumbling piano (possibly self-made guitar derived), all of which adds variety to the previously restrained sound palette, the piano/guitar sounds being especially effective. Our dynamic duo even deploy some big (in this context) gestures notching up the pace and adding a sense of purpose or direction. The end of this piece is relatively bombastic. A crescendo, even. Dynamics? Worry not, as it tails off once again into inscrutable high frequencies, still whirring glassily.