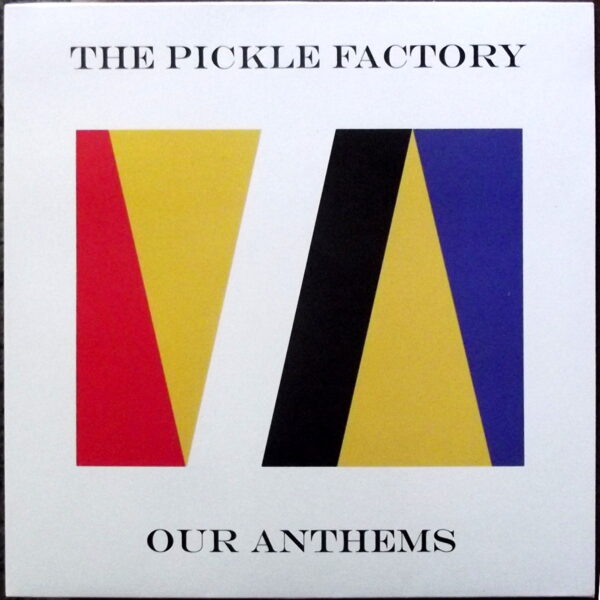 The Pickle Factory
Our Anthems
GERMANY TWISTED KNISTER KNACK 003 LP (2011)
In the 1990s Scott Foust and Karla Borecky were The Pickle Factory, with the addition of Mike Popovich the bass player. This was before the husband and wife team evolved into Idea Fire Company (IFCO) and started their ongoing project of making droney electronic music with synths and shortwave radios, with textual additions informed by Situationist readings. The short-lived Pickle Factory teamup was perhaps a little untypical, but they created solid and enjoyable music in a vaguely post-industrial post-punk area, with minimal arrangements and alienated tones set to steady rhythms – even including some actual drumming unless I miss my guess. Multi-instrumentalist Popovich and his rhythmical contributions gave the music a simple structure that most listeners can relate to, something which IFCO would later tend to eschew in favour of stentorian lectures in analogue drone, although to be fair they picked up the gauntlet again with Graham Lambkin and formed Tart, often referred to as their “krautrock” phase. The Pickle Factory only released one album called Our Pledge which has been issued on CD and vinyl. But now here’s Our Anthems, recorded in 1996 and now issued in a high-impact very graphical sleeve designed by Karla. As well as the rhythmical elements – a sort of slowed-down and klunky electrop framework for depressives – there are also lovely pieces like ‘Whorl’ composed from simple vocal tones floating in a wispy way over a bass pulsebeat. Plus there are tasty keyboard instrumentals which cavort along the street with a darkly jaunty tone, like ‘Take Out Pistol’ or ‘Update’. The brevity of the tunes is also to be admired; Foust would later insist on testing our patience to the limit by extending his tunes well past the breaking point. The titles here reflect his current preoccupations, mostly using sea-faring metaphors to suggest that civilisation is a sinking ship.

Blanche Blanche Blanche
Our Place
USA FEEDING TUBE RECORDS FTR070 LP (2012)
Yo! Annette Peacock meets Robert Wyatt in Toytown! Jad Fair meets The Shaggs at an unplugged concert! 20 short songs on two sides by Blanche Blanche Blanche which is the duo of Sarah Smith and Zach Phillips from Brattleboro in Vermont. I like the way these ramshackle songs are put together, and am even more impressed when they stay stuck together for as long as they do. Each song is as flimsy as a house of cards, so it’s fabulous to hear how long the duo manage to sustain their very ephemerality. Made with a very direct recording method with no effects or treatments, and minimal instrumentation – keyboards, bass and guitar providing just the bare requirement to support the structure of unexpected chord changes, and the even more unexpected twists and turns of the melodies, carried entirely by the voice of Smith. Her frankness is disarming. She sings as though we might be interrupting a reverie or private conference carried out in her kitchen, as if overhearing just one half of a phone conversation. Label notes align this particularly American style of pop-minimalism with Young Marble Giants, but personally I am more inclined in the direction of the second Red Krayola LP. Records like this, which rarely appear, tend to suggest it is within the grasp of almost everyone in the world to make their own personal songs, somehow – it takes the DIY aesthetic into an even more enabling arena. And of course the brevity and economy of the tunes is commendable – they make their statement and then get off the stage. What is the statement, though? It’s hard to fathom the meanings, but maybe these semi-poetical and cryptic utterances will become clearer after more spins. One teensy drawback is the rather soppy cuteness factor, reflected sometimes in the soft-centred tunes which are straining so hard to be pastoral and peaceable that they studiously avoid aggressiveness (and passion), and thereby lapse into rinky-dink Nursery Rhyme corniness on occasion. And Smith’s vocals, while mostly shorn of needless decoration, can also grate when she brings in a corny flattened fifth or hackneyed vocal mannerism once too often, which breaks the spell for me. These are minor quibbles though as this is highly original material which, in its fey and mannered fashion, succeeds quite well.