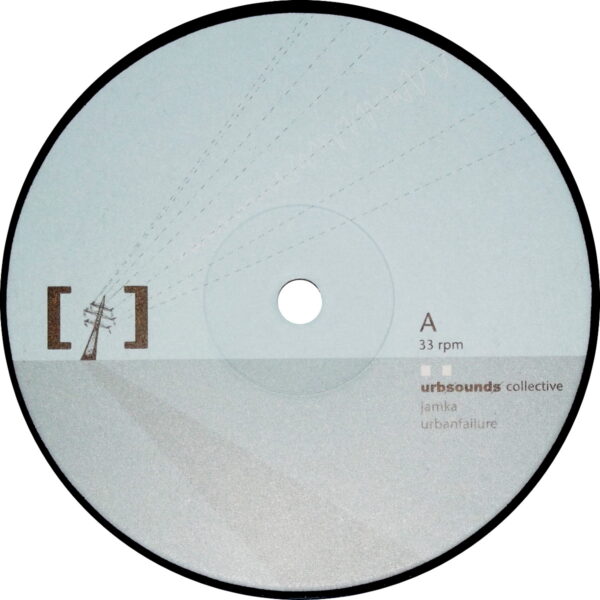 Jamka / Urban Failure / RBNX
Urbsounds Collective
SLOVAKIA URBSOUNDS COLLECTIVE 10 LP (2004)
A nice vinyl compilation from the Slovakian underground electronica team. This one showcases early work from Jamka, Urbanfailure, and RBNX, recorded in late 2003 and 2004. The five tracks from Jamka are all live recordings made with various synths and sequencers, each one presenting an overloaded surface of near-chaos, scattered liberally with squiggly noise and frantic scrabbling. A recognisable pattern of beats, or pulsations, barely emerges from the frenetic activity of the duo of Monika and Daniel. It’s hard not to love their intuitive, near-primitive approach to the way they hammer their devices, and they regard their music as a response to everything around them and a piece of collaborative teamwork which could only be performed by them. (They are friends of mine and they commissioned me to draw a T-shirt, so I will declare an interest). Urbanfailure has a good dose of the same happy amateurism in his music, but his cuts feel much sketchier and half-finished; I don’t feel the same drive or passion in these rather random collisions of minimal drum-machine programs with errant keyboard stabs and yoopling electronica, but ‘External Clock Jitter’ is a great title and quite descriptive of his “machines going wrong” approach. Like Jamka, he seems determined to subvert steady patterns with his beats and tries his best to disrupt linearity. RBNX just has one track. His work takes a while to get going. Random pieces of electric noise, mistakes, doodles and jumble are fished out of a storage unit and stitched together according to a highly illogical scheme. For this very reason it is also quite endearing, though it’s almost impossible to follow the creator’s line of thought, if indeed there is one. A true bedroom mixing-desker.

Sculpture
Toad Blinker
GERMANY DEKORDER LP (2011)
First heard from Sculpture with the 2010 release Rotary Signal Emitter, about which we enthused mightily. Now here’s more of the same, another gorgeous 45RPM picture disc with the music by Dan Hayhurst and visual by Reuben Sutherland and an art object that in some respects conjures up the live performances of this unique and very creative English duo. Apparently it is possible to recreate the zoetrope effect of the picture disc when it’s rotating on your deck, but only if you capture it on a camcorder from just the right angle. Hayhurst’s music is an irresistible melange of cut-ups from old records, beats, analogue squelchiness, and sources that would baffle us if the truth were known. Perhaps he uses a time machine and rescues old singles pressed onto cardboard cereal packets from the 1960s. All is thrown together with a bric-a-brac carelessness, a right-first-time boldness of gesture, qualities that would surely have endeared him to Claes Oldenburg. In fact I could easily see a record like Toad Blinker making a very good soundtrack for a visit to an Oldenburg exhibition full of glazed plaster casts and brightly painted papier-mache assemblages heaped up in disorder on the rickety wooden tables. Sculpture may have one foot in club culture, but like our urbsounds friends above they find ingenious ways of sabotaging the four-square tyranny of the beatbox, and any over-familiar or trite keyboard sounds are likewise disrupted and denormalised by the hyper-busy collaging technique. Hayhurst has the nimble fingers of a Carnaby Street tailor cutting a paisley shirt for some rich Kensington hippy in 1968. I may have noted this before with Sculpture, but these movie-picture disks represent a highly integrated art statement that puts all of their strengths into a single portable package of audio-visual information.