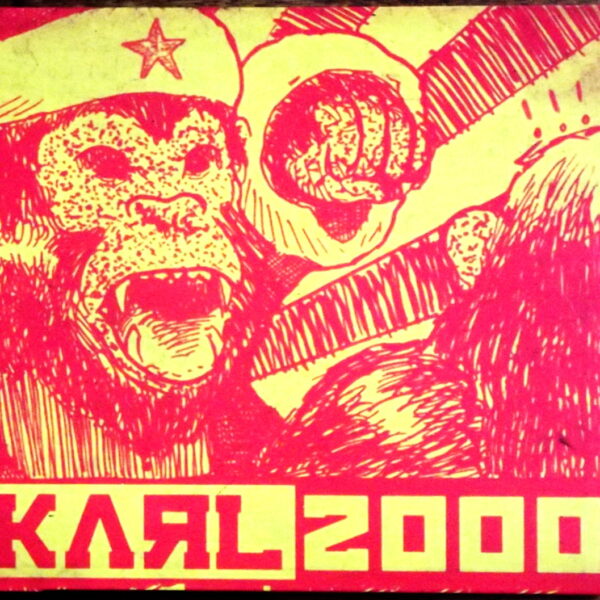 Rum jazz item received from Karl 2000, a trio based in NYC and led by saxman Daniel Rovin. Oddly enough he draws his main inspiration from a very non-jazz source, The Alexandrov Ensemble, otherwise known as the Red Army singers – those massed Russian singers who deliver bombast, solemnity and gloom in equal amounts as they sit perched in rows dressed in their khaki military uniforms. The challenge for Rovin and his men is to emulate that enormous chorale sound, a task for which Rovin seems well suited with his wide-brimmed bellowing instrument, assisted by the lugubrious cello sweeps of Austin White, the bassist in the trio. Additionally, three of the songs are based on Russian folk tunes, while the rest are self-composed or based on rather unlikely choices of standards, including one by The Partridge Family (that most bland of all the invented 60s bubblegum groups). Rovin’s other ace in the hole is his ability to perform a convincing reincarnation of Albert Ayler’s sound, sliding around the root note with all the supernatural grace of the original Holy Ghost, while his sympathetic sidemen perform studied twists and turns in their dynamic cavorts. An unusual and engaging brew in this samovar. (29/08/2012)

Another somnambulistic head-scratcher from Kiko C. Esseiva, that occluded studio whizz operating out of Lausanne. It’s been about six years since he made Sous Les Étoiles for this label. His Drôles d’Oiseaux (HINTERZIMMER RECORDS HINT 14) is even more surreal than its predecessor and spares no effort in reconstructing the fragmentary nature of a dream, pulling it out of the head of the reckless sleeper with tweezers and then gently pressing it between the leaves of a book (or a CD album, in this instance). On ‘Safe’n’Sound’, we feel anything but safe – odd ambient murmurs float trippingly along the mossy path, only to be gently spooked out by the subtly emerging presence of a woman’s voice speaking in broken phrases, or an unidentifiable rustle in the bushes. Magritte himself could not have painted it any better. The queasy growls of this cut will make a perfect accompaniment to your oneiric visions of Max Ernst forest paintings, but the real tour de force is the 21-minute ‘Je Vole’ – a highly cinematic and episodic suite divided in nine chapters, or “tableaux” as Esseiva would have it. This one’s like a mad inversion of the early Fantômas movies overlaid with supremely contemporary angst and paranoia; burglars’ footsteps move from speaker to another, a frightened man gasps for breath as he flees his pursuers, and sinister curlicues of antique-distressed electronic drone paint fern fronds around all unlit corners of the mise-en-scène. Passion, excitement, convulsive beauty. (08/2012)

While we’re still in vaguely “gothic” mode, let’s bend an ear to Locrian and their collaboration with the famous Christoph Heemann on LP by same title (HANDMADE BIRDS HB-DIS040). Just four long tracks on this vinyl album where the core Chicago trio of Hannum, Hess and Foisy have their very full sound bloated out to even greater hyper-real extremes by the additional electronics and synths of Heemann. This German Dr Moreau type has been courted by many underground types since his H.N.A.S. days, among them Edward Ka-Spel and David Tibet, and thus it’s not entirely preposterous that the orbit of his secret balloon should coincide with the dark and cloudy morass generated by Locrian’s fatalistic factory chimneys. Great volumes of tar-like musical cascades are the result of their meeting, impenetrable fugs of cataclysm, dank lagoons of unspeakable horror. While I wasn’t bowled over by Locrian’s The Crystal World in 2010, where I felt they were in danger of defaulting into over-familiar stoner-rock territory, with this outing the trio steer their ship confidently into the dark waters of atmospheric art-music, avoiding many hidden rocks and sea-monsters with the help of Helmsman-Heemann behind the wheel. My favourite here is the histrionic excess of ‘Loath The Light’, but you might enjoy ‘The Drowned Forest’ better, subtler in approach, and yielding a limpid vision of a misty mountain worthy of Herzog with appropriate Popol Vuh-styled chanting tones. (08/2012)