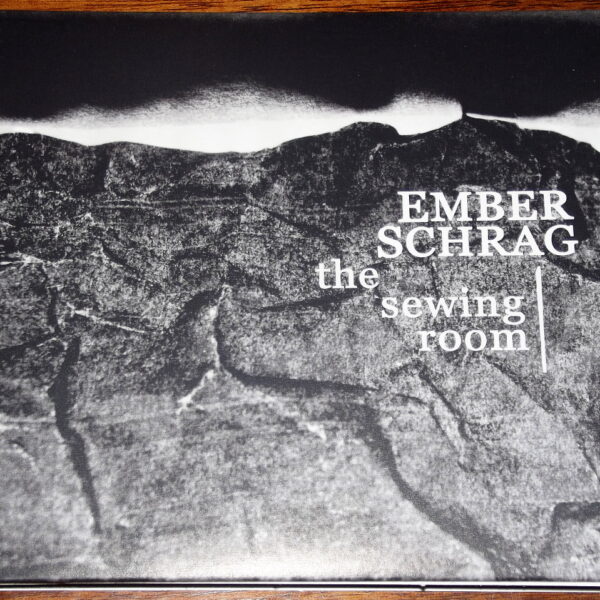 Ember Schrag
The Sewing Room
USA SINGLE GIRL MARRIED GIRL SGMG25 / EDIBLE ONION EO-016 CD (2012)
Lavishly presented CD of widescreen American yarns (pun intended). Held together by the thread (ahem) of Schrag’s crystalline, melancholy vocals and clean finger-picking. The relaxed backing instrumentation – all played scrupulously well, you can’t hear any joins – is burnished to a rich, welcoming lustre, like a comfy well-used leather armchair. Or a smiling old man with a bag of traditional sweets, a briar pipe, and a face made from a well-used leather armchair. This consummate, mellow and melodious folksy (not a spelling error) music, with many lilting fiddles and softly brushed drums, provides the backdrop for songs primarily of love and loss.

Many archetypal American activities and symbols are delineated lyrically. People sit in saloons, there is cherry pie, cars are driven, people cross the road, other people leave for the coast 1. The old-time Jesus and God of rural America are invoked. Indeed, although recorded in New York and Nebraska there are hints of the Southern Gothic milieu of Flannery O’Connor in the songs. Likewise the lyrical setting is a slightly fevered mix of road-movie, modern quotidian and idealised Americana. Houston is referenced in one song title and the setting and treatment of the maritime locale in another – ‘I Ain’t A prophet’ – could be compared and contrasted to Houstonian Jandek’s coastal ramblings on ‘Point Judith’ from Six and Six. There alienation and loss inform a thorough deconstruction of lyrics and song structure. The Sewing Room is by contrast quite traditional, even if that tradition leads us to the recent rather than deep past, a microcosm of pop–cultural concerns and tropes and quite poppy in execution. A lot of these songs are rather catchy, and they clearly are crafted songs, starting life in a singer-songwriter mode, honed in performance, fleshed out in the studio with sensitive expanded arrangements.

The overall tonal gestalt is similar to a certain type of American indie movie, some quirk leavened with sentiment and generally rather accessible. There’s probably some Indie rock in there as well. Personally, I instinctively balk at such an approach. But then again, my idea of a pleasant ditty errs more along the lines of Frenchmen singing about toilets (c.f. Red Noise). However, students of Americana and fans of more conventional pop and folk-rock song-forms may well find things to engage and enjoy here.