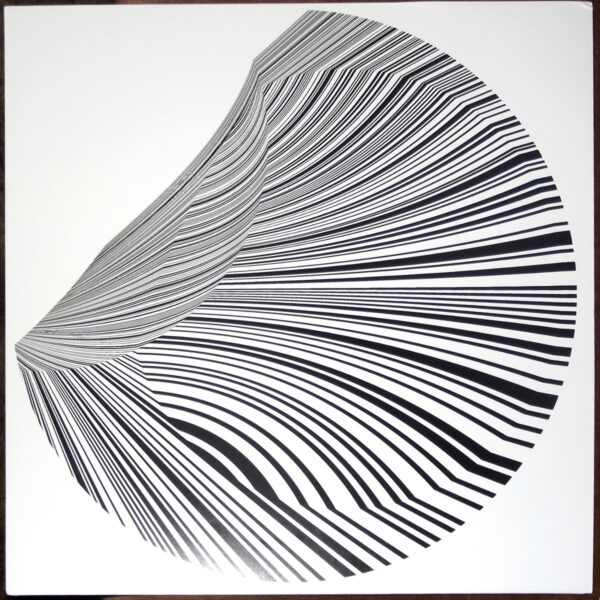 Phantom Horse produce quite jolly and pleasant music out of their keyboards, guitars and percussive objects, creating a rather dense and busy surface across nine tracks on their self-titled LP (DEKORDER 062). The label’s perception is that the duo of Ulf Schütte and Niklas Domaschk fill in a space between Kosmische German electronic music and the more considered minimalist compositions of the American school; for the latter, Philip Glass springs to mind when we listen, given the duo’s frequent inclination towards continually repeated arpeggiated piano riffs. With their multiple percussion layers, they also succeed in suggesting a vaguely ethnic strain of African thumb-piano music, or a form of poppified lite-Gamelan. A speeded-up Philip Corner music for fans of drum-machine electro music of the late 1970s onwards. The LP sounds sumptuous and rich for a home recording, and I like the seamless tapestries of the music where no space is left unstitched nor any thread left hanging. Yet in spite of all the percussion elements efficiently weaving the hoped-for “polyrhythmic” effects, the players themselves are rather stiff – they cannot syncopate, swing or accentuate worth a darn. As a result the music carries itself with a brisk but awkward walking motion, when one feels it ought to be skipping, dancing and running all at once. (13/07/2012)

Mike Connelly has made another sinister noise-exploration album as Failing Lights. We very much enjoyed his 2010 release for Intransitive Recordings, but he’s been releasing material under this name for American Tapes and Gods Of Tundra since 2005 onwards. On Dawn Undefeated (DEKORDER 063), this Wolf Eyes / Hair Police exemplar of beastly American Noise continues the trend for understatement and restraint that characterises his project. This is not shocking noise music, but it remains potent and chilling. I suppose the challenge for Connelly has been to rein in any tendencies towards the familiar amplified savagery, yet still deliver ice-cold sensations of terror to the audience. He succeeds with these very stark and simple experiments, pushing together isolated guitar and synth sounds to create bizarre, unsettling combinations of electric juice. Each work is as brittle and mute as a modernist sculpture, all spiny bronze and unpolished stone. I’d imagine that few of these pieces are prepared or composed in any conventional sense, and rather emerge from intense studio sessions which were subsequently edited and sequenced. As a result the movements of each instrument are dark and weird, unpredictable as a crawling bat on the mossy ground by night. Connelly almost seems to leave pieces deliberately half-finished, the better to leave us with a mystified and troubled sensation in the pit of the stomach. ‘Our Wild Flight’ is the strongest track, it closes the album and offers a grisly drag-me-to-Hell effect rendered in the most emotionless and pitiless manner possible. The album was cut at 45 RPM, but I found it is equally horrifying played at both 45 and 33. (13/07/2012)

Keith Fullerton Whitman released Generators in early 2012. That album contained documents of his 2010 endeavours concerned with live performance of electronic music. It was reckoned by many to be something of a benchmark achievement, in its mixture of analogue / digital hardware and making music with a semi-composed / semi-improvised mindset, given that extra edge of excitement from doing it in the live arena. Occlusions (EDITIONS MEGO 026) could be said to continue that galactic endeavour, and Whitman indicates in his notes that he regards it a “companion piece”. It’s much harder to listen to than its brother, however. The performance is almost alarmingly half-human, half-robot…machine-generated random bursts are let loose by the performer, who admits he has gone out of his way to refuse recognisable patterns of any kind. That includes rhythm, meter, melody, and “a cleanly outlined organisational sense” – many of the things that bring conventional pleasure in music are thus stricken from the agenda and removed from the table. It’s probably more sensible to approach both the sides here (live recordings made in Europe in February 2012) as documents of Keith’s work in progress, snapshots of developing ideas, workings and reworkings of the Occlusion theme as he bravely takes his ideas into the unforgiving world armed with only some black boxes under his wings and a very game pluckiness in his heart as he girds his loins and stirs his stumps. There’s a somewhat raw aspect, doing it naked or without a net; even the “mood swings” of the performer are noted, and can be heard to some extent manifesting in the music (side B is more aggressive, when he was in a blind rage for some reason). All of this honesty is confirmed by the deliberate decision to make audience recordings, using cheap technology and with the recorder situated so as to capture the same events as he himself was hearing. He even encoded the sound files at quite a low resolution. Yet here, pressed in vinyl and mastered at 45RPM, the sounds are penetratingly sharp. Oddest of all is the artist’s claim that he considers this heavily abstracted and disjointed work “a ‘kind’ of Dance Music”. (06/06/2012)