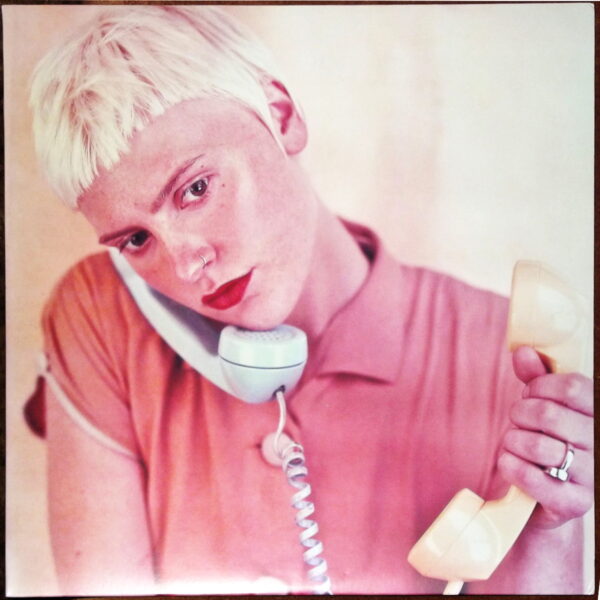 Omnivore is Glenna van Nostrand from Cambridge, MA. On her self-titled LP (FEEDING TUBE RECORDS FTR072) the gimmick is that she records her voice through old telephones, whose small microphones presumably give her what she seeks in terms of an interesting filtering effect and a non-digital warmth. To advance that strategy, she records everything using amplified radios. Strip away that technology, though, and what we have is an odd album of acapella songs. I do like the way she has assembled her songs with much care and craft, overdubbing voice recordings to build a virtual doo-wop group out of her own personality, and making clever use of repetitions in these simple round-like compositions. She’s like a minimal version of Bobby McFerrin, even supplying her own percussion and rhythm section through voice. It would be nicer if she could manage a bit more variety in the vocals though. I’m not hoping for a Coasters-styled vocal group with alto, tenor and basso profundo effects, but everything Omnivore does is pitched at the same level, meaning that the songs lack musical depth and become monotonous. Her lyrics mystify me, but she’s plainly from the school of disaffected modernist poets, making a virtue out of inarticulacy. We are invited to enjoy the dislocating effect taking place as she apparently forms her thoughts before us, in real time. The cover image also tells us something’s wrong; but for the woman’s troubled face, it could almost be a faded snapshot from the cover of Better Homes and Gardens in the 1950s. (31/05/2012)

The double album Electric Cremation (GRAUTAG RECORDS GTR#003) by Pharoah Chromium was released in 2011. The performer may or may not be Ghazi Barakat who also records as Boy From Brazil. He did all the work here with some help from Timothy Gane, who added synths in places and recorded and mixed the album in Berlin. The large amount of material has been organised so that each side has its own distinct mood and flavour, as indicated by the titles “Atomic Side”, “Feral Side”, and so on. The record starts off with a song, and ‘L’Age Atomique’ is a splendid piece of bleak minimalist electro-beat, sung with perfectly calibrated icy precision by guest vocalist Becky Ofek. This gem turns out to be untypical of the remainder of the set though, which I would characterise as assorted forms of drone, synth sludge, distorted guitars, and noise. A few interesting sounds struggle to the surface of this swampy heap, but the cumulative effect of this formless music is smothering, and rather depressing. The generally apocalyptic tone is reflected in the track titles on sides A and B, which paint grim portraits of urban decay, ruin and pollution. I might add this is entirely in keeping with the aesthetic scheme of Nicolas Moulin, who is the curator of Grautag Records, and freely owns his preoccupation with boredom, depression and futility in the accompanying sleeve note, giving visual expression to his afflicted state 1 through his grey photographs of desolation printed on the gatefold sleeve. Meanwhile Pharoah Chromium moves on from the harsh and aggressive tones on the “Feral Side”, to wobbly and offbeat ambient drones on the “Ghost Side”, whose quasi-mystical titles represent a small window of relief from the general sense of occluded misery we have endured thus far. The closing “Arabic Side” is suitably tinged with Eastern intervals spicing up the guitar melodies. Not an uplifting album, and one which might have benefited from some editing to shorten the longeurs of certain keyboard passages, but as a coherent statement exploring a colossal sense of existential emptiness and futuristic dystopian nightmare, it takes some beating.

Tom Recchion brings us Proscenium (ELEVATOR BATH eeaoa037), his album of beautifully-crafted electronic music that is his first release since Sweetly Doing Nothing in 2006. The music has its origins as soundtrack for the work of a film-maker and puppeteer who was producing a theatrical adaptation of a story by Edgar Allen Poe, and at one level Recchion has no other ambition with these reworked versions than to create a set of suitably morbid atmospheres. Typically however, Recchion’s vision reaches farther than that and when realising that stage-bound experience, he staked a claim on the soul of each member of the audience, wishing to pass on a sonic experience that immersed them in abstract intangible murk while they were watching the play, and kept on deepening gradually until, without realising it, they were up to their eyes in bone-chilling liquid fog. Even as they went home and attempted to forget about it, this persistent globule of fear would cling to their clothes for days afterwards. A similar experience – Recchion calls it “an ongoing series of atmospheres” shall be unleashed if you dare to uncork this vinyl bottle, whose bounty extends to two sides of a thick and crusty long-player and a 45RPM single, the potent charms enscribed with evocative titles such as ‘The Haunted Laboratory’ and ‘The Mesmerised Chair’. Clearly, Recchion has studied his Poe well; music like this would make a most fitting soundtrack for M. Valdemar as we watch the decay and corruption of his mesmerised body as it is suddenly released from suspended animation. Naturally, this professional and well-burnished music – it has a presence as expensive and sleek as a black diamond – is some way from the more raw and experimental work that this creator produced as a member of the Los Angeles Free Music Society, but it still carries a similarly obsessive artistic charge. This is creepy music that stalks you, with the tenacity of a silent assassin. (24/07/2012)