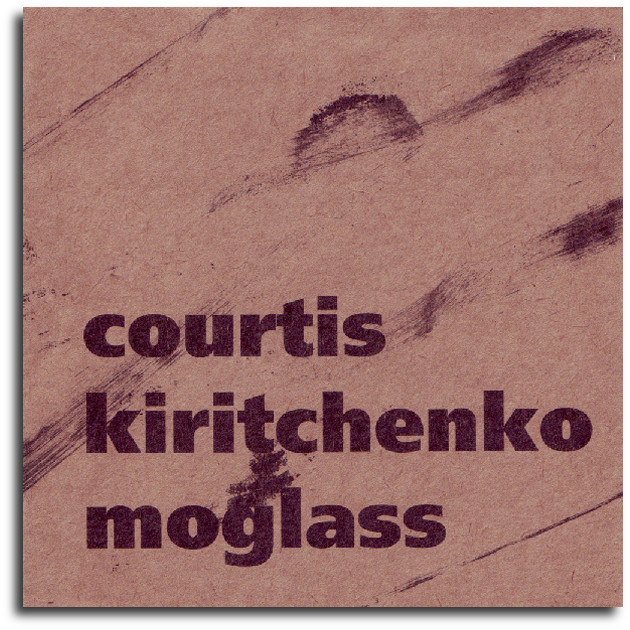 I’d forgotten that I had this CD for some time. Two musicians and a group – Andrey Kiritchenko, Anla Courtis and The Moglass – trade various sounds they have created and the recipients manipulate and mould what they find into something completely new.

Kiritchenko, head honcho of the Nexsound label, claims the first three spots on this recording with his remoulding of sound sources from former Reynols member Anla Courtis in combination with his own . His interpretations are very spacious and beautiful to behold. The first two tracks are good but the third is outstanding with busy droney or flubby sounds.

The Moglass nab the next three spots (tracks 4 – 6) with interpretations of pieces by Anla Courtis but nothing from Kiritchenko. Compared to Kiritchenko’s contributions, these pieces seem subdued and inward-looking but they pass muster: the fifth track features crazy vocalisations and track 6 has some bewitching shimmery metallic tones that echo, giving the piece a mysterious and somewhat remote ambience. This last effort from the group is one of the better pieces on the whole recording for its somewhat enigmatic quality though for what it does, it’s rather long and monotonous.

Bringing up the rear but claiming the last five spots (tracks 7 – 11), Anla Courtis gets to have the last laugh by remixing sound sources from both Kiritchenko and The Moglass. He starts off in fine style with something very busy and spacey, full of UFO take-off and landing noises. The Moglass pieces are turned into something spooky and intriguing; there might be some danger here but Courtis gives no indication that there are sinister happenings ahead. When it comes to handling the Kiritchenko source material, Courtis produces much crisper, less muffled sounds. However everything seems to be more or less on an even keel and no one track really stands out in any way.

Very pleasant on the whole to listen to casually but most of the music here seems fairly average given the backgrounds of the musicians featured. Some people might expect more quirkiness and off-beat ideas from Courtis: well, I have to advise he left the eccentricity at home. A few tracks are longer than it takes for listeners to grasp their essence, and do not change much for the whole length of their duration. Also the collaboration is lop-sided: Kiritchenko and The Moglass work on Courtis’s material only. No wonder it took me a while to review this; this recording really doesn’t stand out from the rest of the experimental pack and it got swallowed completely in my collection.