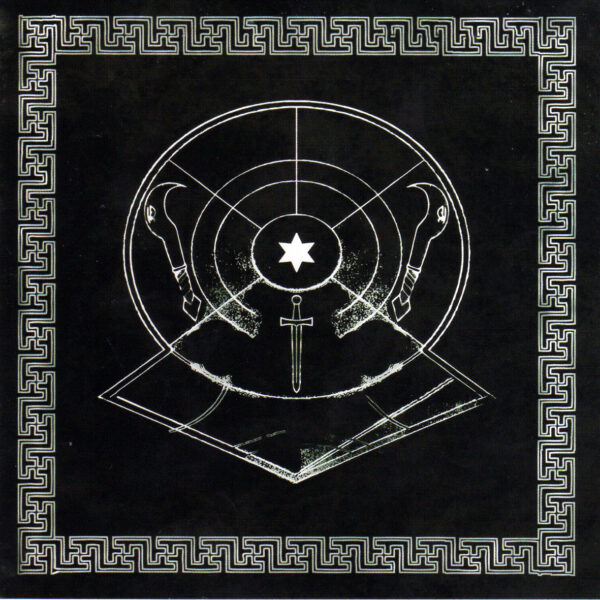 Book Of Delusions (COLD SPRING RECORDS CSR166CD) is a sepulchral item which we’ve had here in the lobster pots since April 2012. Burial Hex is the solo “project” of Clay Ruby, a manifestation he’s been working under for quite a few years since exchanging his cowboy hat and studded boots for the starred cape and pointed hat of a magus or warlock. Even so now I look back at the Davenport, Zodiac Mountain and Hintergedanken records I love so well (I have only heard a small proportion of this American wildman’s prodigious output), I suppose there has always been a streak of morbidity and magickal charms in the lyrics, cover art, and general demeanour of the oddly anguished and twisted music, even when he and his team-mates were exploring good-vibes trancey psychedelic workouts. No good vibes on Book Of Delusions however, which is as black as tar on a black road under a midnight sky in the Black Hills of Dakota. If we can believe the hyperbole and rhetoric surrounding the back-story to this release, the music here was woven to serve as an aural amulet, a protection charm to help Clay Ruby stay alive. He was personally beset with so many demons and shape-shifting devils of deception 1 that his only possible response was to make this highly ritualistic album, and he was compelled to draw an elaborate musical chalk circle around his endangered soul. For this task, he recruited the aid of collaborators Nathaniel Ritter, Troy Schafer and Lliam Ian who contributed guitar, electronics and percussion to selected tracks, but what we hear is mostly the work of Ruby, writhing inside his studio-based wizard’s den with many a cry of “curse go back” and “aroint thee, witch”. Voice samples, moaning choirs, throbbing and mean-spirited synth burbles, and harrowing shrieks of pain are the abiding hallmarks of horror, with all the terrifying music proceeding at at agonisingly slow pace. Whether it was effective as a charm against his personal demons, only Ruby could tell you; for us listeners, it’s one of the most cathartic and visceral experiences available to you, short of throwing yourself into (a) a smouldering volcano (b) a deep vat of acid, (c), a crocodile-infested swamp or (d) all of the above. The CD is a reissue / compilation, which includes the original limited press LP which came out on Brave Mysteries in 2011; and adds four bonus tracks, namely ‘Go Crystal Tears’ and ‘Temple Of The Flood’, Clay’s two contributions to the 2009 split LP with Zola Jesus; plus ‘God Of War & Battle’ and ‘Storm Clouds’ from the Vedic Hymns split LP with Kinit Her. While it’s possible to align Burial Hex with many strains of bleak apocalyptic / extreme industrial / power electronics music, I feel strongly he is making a very distinct and personal mark on the genres, as potent an inscription as any rune or sigil. This even extends to the way he renders his alias and his name, all capitals with no vowels, presumably as another strategy to conceal his true identity from his persecutors. Strong wine in these barrels! (23/04/2012)

Now for another item from the Copy For Your Records label. Mites is Grisha Shakhnes, who recorded Passing Resemblance (CFYR010) as a home experiment, leading off with a 16-minute exploration of machine-like rumbling tones called ‘You Can Come and Shake My Hand’. One might almost overlook this subtle work as a simple process piece, derived perhaps from the motors of electrical equipment, except for the fact that it evolves with clever dynamics into a more generalised and threatening rumble that increases in brooding snarliness with each passing moment. The genius has been to accentuate the roaring growl with small celeste-like notes, which shine like tiny raindrops against the all-black background. Severe sound-art sweetened with a tiny taste of melody…it’s as though Mites were saying to the listener, “You want music? OK, I’ll give you some (sneer) music, bub…”, in a snarling tone laced with heavy sarcasm. I read it as a quite ingenious parody of modern musical composition, laying bare the futility of all our endeavours. The main event on the album is the 34-minute stretch-a-thon called ‘Why Elephants Are Not Allowed To Cross A Bridge’. In title, this could be a lost chapter from Kipling’s Just So Stories; in sonic terms, it’s Samuel Beckett at his most unforgiving, a bleak and testing excursion into minimalist tones, a misty journey that starts out deliberately undefined and as hazy as a misty morning in the alps. The mid-section is suggestive of wooden timbers being assembled and hauled into place by pulleys, yet that enterprise is starkly devoid of any human presence whatsoever. Then, following the same trajectory as the hand-shaking companion piece above, this elephantine track grows and increases in complexity, thickening the texture with yet more abstractions, layers, and wholly unidentifiable off-cuts of aural murk. A true head-scratcher, Passing Resemblance could probably pass muster as an inclusion in the excellent winds measure recordings catalogue, although it seems to have a vaguely sinister intent lurking behind its inscrutable tones which means it surpasses most formal experiments in treated field recordings or sound art transformations. An understated gem. (09/08/2012)

Wolfram‘s self-titled CD (VAN FONGOOL VAFCD001) fits into the theme of this post mainly because of the cover image, which features a slightly demonic dog with glowing eyes, probably the sort of astral which bedevils Clay Ruby so much. As it turns out this album is in fact a set of invigorating free jazz from Stavanger. The Wolfram trio are experienced jazzers and, according to label boss Eirik Tofte, “have evolved out of the environment around the new young Norwegian jazz scene, based around the great schools in Oslo and Trondheim…they’re getting more and more acknowledgement for their new thinking and creative ways of playing music.” I’ll add my voice to that consensus. Saxman Halvor Meling is, to my great relief, not one of these overblowing types who like to honk and screech into their instrument, and although he may lead off the album with a bit of atonal wailing that may put off civilians and squares, he soon reveals his talent for inserting his snakey, undulating lines into the wayward grid structures built for him by bassist Fredrik Luhr Dietrichson. There are many beautiful invented melodies on the album, which vanish as quickly as they appear. Meling can create a gorgeous tone of astringent sweetness when he wants to, and it’s not all about high-energy sqwawls and angry barks, though the trio can do that too when the situation requires it. Honest and warm music that contributes much to the free jazz genre, without ending up as an empty pastiche; and on occasion, the trio manage to edge close to a species of scrapey metallic noise, aided in no small measure by the drummer Jan Martin Gismervik, who can grind his cymbals with such determination you’d think he could squeeze fresh coffee from their burnished surfaces. As such, portions of this album ought to appeal to many disaffected Norwegian youths who find themselves in need of a good blast of genuine acoustic din made by humans, instead of all that lazy table-noise garbage spewed out by machines. The first release on this newish small label, which hasn’t put a foot wrong with its releases so far (four to date, all very spicy items); they plan to bring us “new, challenging music within the free, improvised and noisy parts of music.” (30/08/2012)