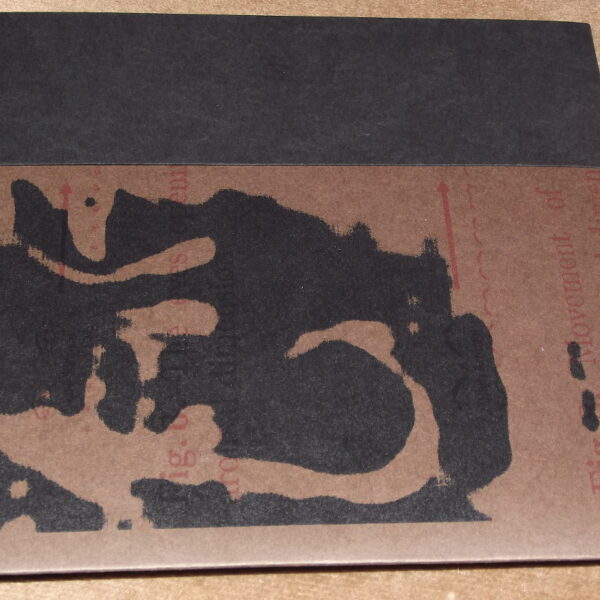 The fabulous Liam Stefani sent us a package in August 2012…you recall we heard him under his Skitter alias on the record Tone Chambers, where he transformed the accordion of Richard Sanderson into strange and unnatural tones. Through his mystery, he is doing equally twisted things to the voice and vocals of P6, the fellow who used to be lead singer in Stretchheads, the band who made some tasty-looking recordings for Blast First in the early 1990s…objects around which I must get my pale white fingers at some stage…P6 to gauge from available visual data is not a man to footle around with half-baked or commonplace remarks when he opens his maw to speak, and it’s fair to say that an hour’s drinking time with such a man would equate to about a year spent with anyone else. So we’ve got this seven inch single with layers of overprinting on the cover, murky brown and black colours, called simply Skitter + P6, and is described as “vocal improv in six emotional states with process”…said emotional states identified as ranging from joy to fear by way of sadness and disgust. Now I have oft maintained that the best music ought to arrive at doorstep of listener much like an alien invasion would – shocking, inexplicable, something from which the world never recovers. Skitter + P6 may broadly assent to that approach, based on aural evidence in these hot grooves. Voice of P6 mangled almost beyond recognition, but not a destructive change, because through this art a human truth shines through even more vividly. A fact as undeniable as human tripes and viscera, so cheerfully celebrated. Voice turned into a ray gun. Apparently if you were lucky enough to have seen Captain Beefheart and The Magic Band in 1969, then the drummer Ed Marimba would step out on stage and shoot a ray gun at the audience while intoning an appropriate chant. Matt Groening has witnessed this event and told the tale as a matter of record. As further evidence of the power of this particular charm, see Claes Oldenburg and his Nug Yar paintings. And also buy this uncanny record. 100 copies only!

Now let’s see, we also got an entire cassette of this far-out sonic mayhem of whoopery and electronic vocalised joy. This one is a split tape called P6/Skitter in a variation on above title and so happens to be derived from the same source material as featured on the seven-inch. Again we have the image of six heads of P6, this time in a painted version made by Hollis. Note profound alterations to his entire physiognomy as he passes through these mental states. Might not be too far out to draw a parallel with the sculptures of Franz Xaver Messerschmidt, uneasy artefacts that occupy a mid-point between intense psychology and art, leaving many viewers walking away from the gallery in a state of consternation. P6 puts himself through the process as willing experimenter / performance artist, not unlike a post-punk Stuart Brisley. His side of the tape is sure to appeal to Merzbow fans and other devotees of wild noise, but mainly through use of loops and repetitions which are used to create unholy layers of very intensive and uncontrollable terror-joy states, laced with heavy-duty hallucinogens and powerful mind-altering stimulants. A true whirlwind in the human zoo it be, passionate and overpowering, but you are among friends at all times and the conclusions to be drawn are unfailingly positive and optimistic, not the lazy cynicism and despair of most industrial noise-drudgery. The Skitter side is far more nightmarish, a sinister crawl through lugubrious Clive Barker territories with The Golem and The Iron Giant as your escorts. Only Wolf Eyes have come close to evoking this palpable sense of dread and decay in sound, yet even they would blanch at the extreme depths to which Skitter is prepared to perform his spelunking. Especially affecting are the despairing sobs that appear around 6:00. I believe it was Ben Katchor who correctly observed that “nothing beats the sound of a weeping man”. I would highly recommend that you dive headlong into this cassette and bathe freely in the mechanised-humanoid tides of this rich art-noise, the better to renew your sense of what it means to be human and to reconnect with your buried primordial instincts. Once heard, you may never be the same, but you’ll be one of the lucky few who understands. Much recommendation for both of these heat-death blasters!

Available from the Skitter Bandcamp