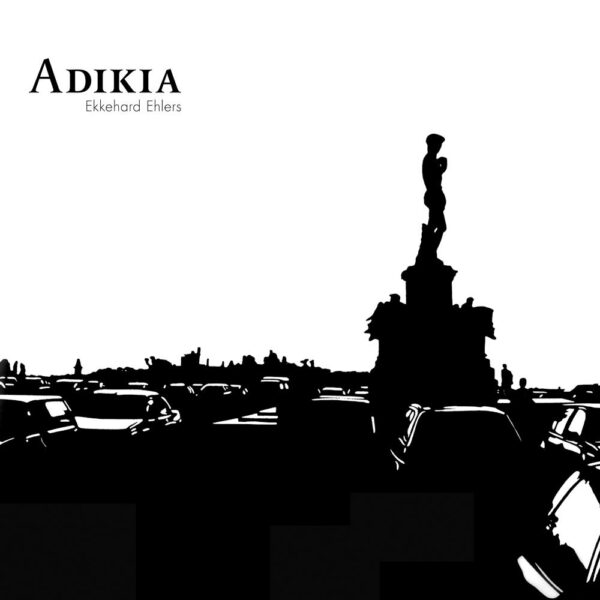 I previously took an interest in the output of the Staubgold label around the turn of the century and at that time they were releasing music by To Rococo Rot, Groenland Orchester, Mapstation, Pimmon, Institut Fur Feinmotorik and Ekkehard Ehlers’ early work, including the Plays… album which, you could say, made his name.

A lot has happened in Mr Ehlers’ career since then; several further solo albums on Staubgold, an album with percussionist Paul Wirkus, (who appears on this disc), a piece co-written with Sebastien Meissner, (Ehlers’ co-conspirator in Autopoieses), and the composer Thom Willems, and even, bizarrely, remix work for The Red Hot Chilli Peppers, and a collaboration with their guitarist John Frusciante.

The word “Adikia” is the name of the goddess and personification of injustice in Greek mythology. As a single twenty-six-and-a-half minute piece, Adikia is certainly concise and to the point. However, as its title is so loaded with meaning, I had expected some form of manifesto; literally or figuratively. There is no information on the sleeve bar the list of participants. And as the accompanying press release in which someone in the Staubgold office simply attempts a clichéd and irrelevant description of what the sounds contained within the cd might suggest, (“Imagine, if you will, a slow motion film in reverse, which starts with a shattered window, the spider webs stretching from side to side…” err… no, thanks), it’s hard therefore, for me to speculate on what the point might actually be.

This in no way affects my enjoyment of the piece, however. Participants include Werner Dafeldecker, Kai Fagaschinski, Paul Wirkus (with whom Ehlers collaborated on their more conventional 2009 album, Ballads), Eva Reiter, Björn Gottstein, Todosch and Rashad Becker.

Ehlers has presumably made recordings with this group of musicians and then proceeded to select passages, some quite short snippets of sounds, and assembled them in software of his choice. The results, at least at the beginning of the piece, are mostly abstract, though there are moments of snapshot ensemble playing, for example the viola and double bass section that begins around the ten minute mark. When this finishes, it is followed by a short period of silence before hissing ensues, possibly generated by the subcontrabass recorder of Eva Reiter, which in turn introduces a section of electro-acoustic tomfoolery. The hand of the producer is audible – digital processing, although somewhat hidden, can be heard with careful listening. This might be the hand of Ehlers himself or perhaps the mastering engineer Rashad Becker (he of Berlin’s Dubplates & Mastering notoriety), who gets an equal credit on the sleeve alongside the musicians. (As I write this, I’ve been made aware that Rashad Becker has just released his first album under his own name, Traditional Music of Notational Species on Pan. Interesting. Perhaps his credit inclusion on Adikia as a group member forms part of his process of moving from mastering engineer to artist in his own right?).

I feel that Ehlers is perhaps employing an interesting albeit somewhat risky tactic of involving improvising musicians in the process of realising a composed score, which is what I presume Adikia is – that great pop balladeer David Sylvian stirred up a hornets’ nest a couple of years ago by cutting up slices of improvised performance by some of the great contemporary improv players like Eddie Prevost and Keith Rowe to song-based result in his album Manafon. Although, on the other hand, there is a lot to be said for the current output of composers from the Wandelweiser collective and youngsters like Sam Sfirri or Patrick Farmer who routinely incorporate improvisational tactics into their scores. Despite my reservations about David Sylvian’s achievements, I should also say that the by-product of Manafon, the film Amplified Gesture, has certainly made my world a better place.

The press release would have it that there are two parts to Adikia. I would claim that there are in fact three. The final part introduces the vocal of a fellow called Todosch. The only concrete information I could glean about this mysterious fellow from an internet search was that he appears to have played guitar on a 2012 album by Nicholas Desamory called Like You which seems very experimental but perhaps really what I would describe as “popular electronic” in nature. Todosch’s vocal performance on Adikia is indeed much darker. I don’t recognise the language he is singing firstly, which creates a feeling of being off balance. And the raw emotion in his voice – here and there you hear him groan between lines in a genuinely worrying manner. It’s as if he is fighting for breath, or is forcing the words out despite experiencing an overwhelming grief or trauma of some kind. And for me, this darkness or claustrophobia surrounding the work, and the shortness at twenty-six and a bit minutes, makes Adikia feels quite oppressive, humid, fevered, even in some way suppressed.

The structure Ehlers employs goes some way to emphasise the overall mood. The first ten minutes are little edits of improvised performance by way of extended techniques on various instruments by the assorted musicians. Spindly, vaporous sounds placed in a line, one after another. The following nine minutes present some melodic information before ushering in the final seven minutes of hymnal vocal by this man Todosch.

I’m tempted to see Adikia as a monument of sorts; a kind of hymn or song of mourning, which in a way it is despite its improvised components. But what is it a monument to? It’s a long way from Ehlers’ earlier work like Plays John Cassavetes which resembled the processed loop approach utilized by artists like Gavin Bryars or William Basinski or Phillip Jeck. There’s no repetition here. Just a bare, emotional statement of truth, outrage and even, perhaps, regret.