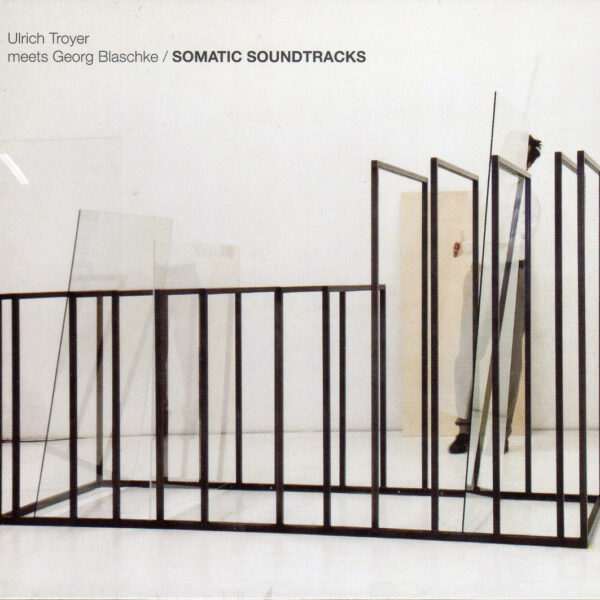 I’ve already passed quite a few pleasant afternoons and evenings with this compilation of recordings made by the Viennese sound-art creator Ulrich Troyer. Originally these pieces of music were composed for dance works choreographed by Georg Blaschke so if they sound rather low-key to some listeners, their initial purpose is the reason. The music moves from very moody abstract ambient soundscapes of a digital grainy texture to actual music constructions based on reggae, techno or dub. Although the sounds are varied, they seem quite tiny in the huge white art space in the album. The choice of instruments to create this array of music include analog synthesisers, samplers, melodica and guitar, performed in the main by Troyer himself with the exception of the last track “Back from Serbia” on which Jurgen Berlakovich played guitar.

The early tracks may prove daunting for most as they are quietly unassuming and give very little away, and you strain to catch every little nuance of tone and sound. The best of these tracks is “Somatic Script” which promises mystery and drama in its sinister whirring, scraping guitar-noise rhythms and foreboding tones.  The middle tracks may still be very bare-bones abstract and quite po-faced but there are intriguing rhythms within their dark spaces (“Your Dancer”) and very sculpted flubby sounds (“In Case of Loss”). “Song for Heide (Extended Version)” finally starts edging towards gentle pop and a definite dub reggae rhythms. “Back from Serbia” is a sunny, laid-back piece of fragmented reggae rhythm and ambience that might have sprung from someone’s much-loved collection of reggae vinyl platters from the mid-1970s.

If there is one criticism to be made, it’s that the tracks are often not much more than studies of rhythm texture and atmosphere, and often sound a bit like excerpts of much longer music. Bear in mind though that the music may have been secondary to the dance spectacle it was written for.

An ideal collection of rhythm studies and loops for an aspiring DJ perhaps and for the rest of us, some nice background music to a quiet restful Sunday afternoon in late summer: this is an album of very modest music.