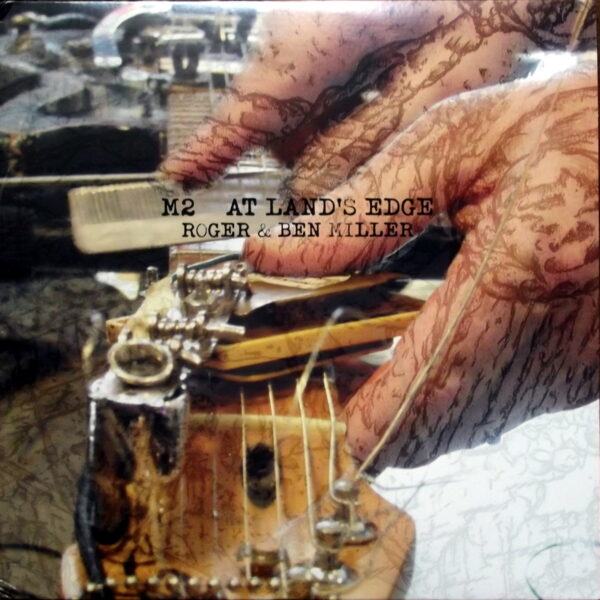 At Land’s Edge (FEEEDING TUBE RECORDS FTR088) is the team of Roger and Ben Miller, performing as M2. These musicians ought to be familiar to you from Mission Of Burma and perhaps a bit earlier as Sproton Layer, who recorded a wayward prog rock album in 1970 which was never released until 1991. And for my money, Mission Of Burma ought to have been regarded as national treasures in America, yet strangely never seemed to quite catch fire the same way as their contemporaries such as Big Black, Husker Du, Butthole Surfers, or Black Flag. I suppose their experimental touches – like throwing pre-recorded tape segments into the middle of live performances – branded them as a shade too intellectual. Ben Miller meanwhile was a member of the second version of Destroy All Monsters, and also recently performed with Glenn Branca. After citing all of these impeccable avant-rock credentials, it’s a pleasure to report that this debut album of theirs is a real success, a splendid set of improvised music made with just modified electric guitar and prepared piano. In fact some visual clues as to these preparations are scattered liberally on the covers, not least Ben’s metal comb stroking the strings of his “axe”, but also the expected array of crocodile clips, clothes pegs, screws, tapes, straws and plastic wall plugs – in fine, the contents of Keith Rowe’s shopping bag on any given Saturday. The record sounds gorgeous, with the disguised instruments pushing their way effortlessly past the barrier of unfamiliarity and into a realm of breath-taking beauty, and at times the combined noise is like a 21st-century refit of Harry Partch, his multiphonic percussion instruments trailing their way into the hobo jungle accompanied by the alternative-universe twin of Larry Carlton, a reverse-image session man who went to join Derek Bailey’s Incus label in London instead of playing on Steely Dan’s records. Both Millers work beautifully as a team too, each responding to a shake of the spinal column and curve of the pelvis as if interlocked like Siamese Twins. While sometimes restrained and murmuring repetitive curses in obscure tongues, the duo can also create extremely surprising and almost shocking noise-bursts, and perform them with much more subtlety than we have any right to expect. All of these 2008 recordings were performed live without overdubbing, and it’s a real pleasure to hear so much sheer craft inscribed in these grooves.

Every time I pick up this LP by The Dogmatics, I think I’m about to hear a lugbriuous record of ceremonial Black Metal. The title, the logo, and of course Zev Langer’s cover painting (nocturnal skeletal beasts hold up a decapitated head under the moon) are the factors that influenced my mistake. In fact, The Sacrifice For The Music Became Our Lifestyle (MONOTYPE RECORDS MONOLP011) is a record of smoky, brittle jazz-like improvisations, performed by Chris Abrahams at the piano and Kai Fagaschinski on the clarinet. Fagaschinski’s name is familiar through some releases on the Erstwhile label, but clearly I haven’t heard enough of this Berlin-based woodwind guy who has an interest in wringing highly distinctive sounds out of his body, via his lungs and throat into the stick of his instrument. On many of the tracks here he barks and hoots like a friendly owl, or evokes our sympathy as a small wounded animal with its pained clucks. The Australian pianist Abrahams is a ring-wise champ, was a member of The Necks in the 1990s, and has been making records of his own piano music long before that. I think his piano may also be prepared on some of the cuts here, given the unfamiliar tone and the dampened effect that sometimes muffles his errant half-chords and truncated runs. A subdued set of tunes on this album, successfully weaving its own strange little atmosphere, from whose central black swamp musical notes hop like frogs or leap like whirring crickets. After a time, it seems as though the supernatural cover art is entirely appropriate for the album.

The album Energy (Of) (COPY FOR YOUR RECORDS CFYR011) was recorded live in September 2011 at a concert in the Wesleyan University, and made by the team of Bryan Eubanks and Jason Kahn. On this lengthy growl-fest of feedback, crackle, theremin whoops and fizzy yawps, they are both described as simply playing “electronics”, but perhaps it’s just as well we don’t get the full equipment checklist. I can hear at least two stand-out effects which rise to the fore in this particular marengo. One of them is the sound of the crowd at Wesleyan, surreptitiously recorded as they chatter in lively manner, and fed back into the musical performance in real time. Unless of course it’s a pre-record tape, but I hope it’s the former – I do like the strategy of feeding off the energy of your audience and using it to improve your music in some way. The second effect is simply a stuck CD hammering away insistently, which only appears on one occasion but has a quite galvanising effect on the entire show. One might almost call it the central node, the junction box through which all the energy must flow. This isn’t to decry the remainder of the set, which is a master-class in dynamic improvisation; how these two manage to escape the traps of mindless droning and shapeless noise ought to be an object lesson to us all. The players are locked in an exciting struggle with powerful forces, which if not controlled will shatter every bone in the body like a giant electric tornado. Document of a first-class performance, yet it also contains a high quotient of the genre of grumbly digital noise that this label has cornered the market in.