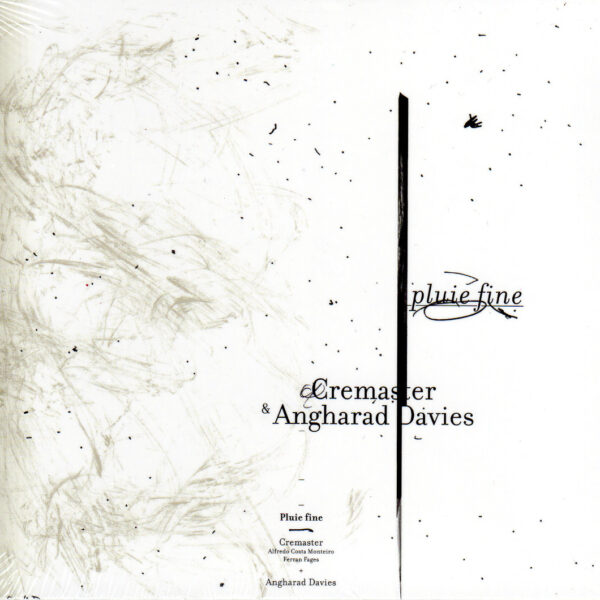 Cremaster & Angharad Davies
Pluie fine
FRANCE POTLATCH P312 CD (2012)
The delicately presented and softly titled ‘pluie fine’ hauls itself slowly into earshot by its own disintegrating and dismayed bootstraps. Any promised moisture remains hidden, although traces of its presence are revealed through pervasive oxidation and corrosion of the soundscape. Creaking and rusting, the sounds of mournful heavy machinery lumber like a lost and groggy David Jackman.

We don’t just get clang and scrape, however. There is some deliciously crispy crunch and hiss action dusting proceedings to keep things tickly, not to mention many echoing oil-drum sonorities to satisfy the most booming requirements. A chance meeting of a welding iron and a fluorescent light bulb, abrasive, with a positive engagement and attack neatly belied by the album title.

There are some operational and instrumental similarities with the Luciano Maggiore & Francesco Brasini CD previously reviewed, but the differences between the two are quite instructive. Whereas the two Italians’ sound was thin and scalpel-like, wandering sometimes in a pool of anomie, this album by contrast feels thick and muscular with the crunch of overdriven pedals, the feedback feels braced in a chunky industrial mixer cabinet. The gestures here come thick and fast, also, and inventive pressure is maintained.

Angharad Davies’s violin becomes more identifiable as we progress through the album’s second track – ‘played’ in a more traditional sense, if you wish – but is woven solidly through the electroacoustic noise like cords of sinew. Dexterous and muscular reel to reel work adds more physical oomph at the end of this track.

By the final track of the album, set against a purple polluted drone the creaks and screeches have become more purposeful, limber, contiguous and rangy-limbed, prowling around their derelict factory hideaway with mischievously miscreant intent. Gas taps are turned on and off, steam escapes, detritus is lobbed through empty rooms.

Assembled over two years, which may account for its structural tightness, this pleasingly never sounds overly determined or drained by over-production. Like the Iron Man of Sabbathian legend come to life as a security guard in a surrealistic scrap yard, guarding against incursions and abrasions by a wandering-minstrel fan of the Third Ear Band, this album provides sprawling heaviness and canny textural juxtaposition aplenty. Fully-formed, punchy formlessness and dynamically composed improvised drones of significant coiled potential and energy.