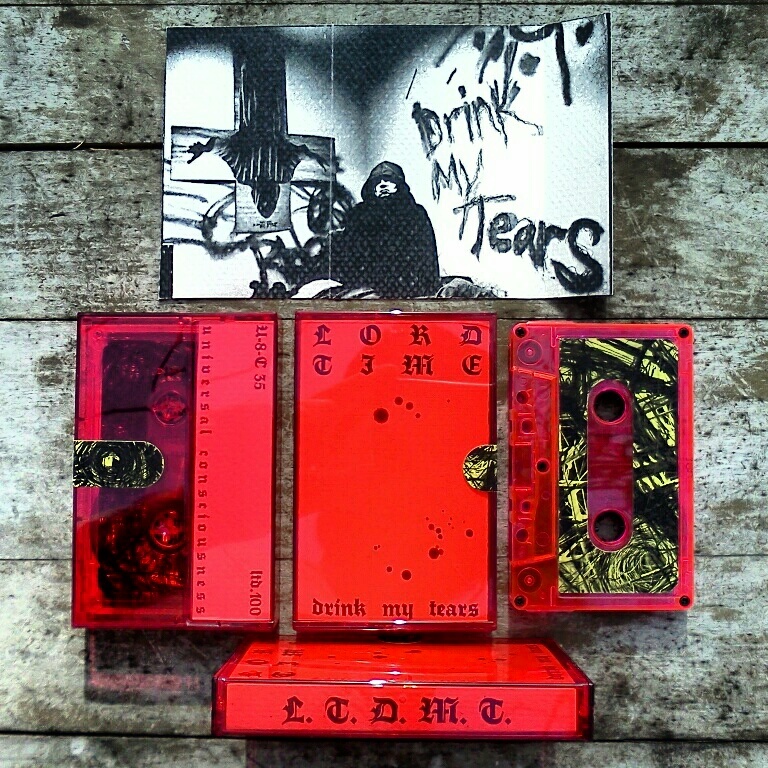 “Primitive psychic metal”, eh? – “Drink My Tears” certainly does have an unusual if rather basic approach to song-writing, dispensing as it does with song-based structures and actual singing, relying instead on emotion to inspire and buoy it along. As for the “psychic” bit, some listeners may more readily conclude “psycho” instead for this is a highly immersive and dense recording in which you all but drown in wave after wave of deranged sound, rhythms and growling / roaring vocals.

The theme of the album appears to be a descent into madness: the raspy vocals, far distant in the mix, moan a lot while the music, mixing influences from industrial, ambient and experimental music genres, all laced with horror, charges on ahead relentlessly. Passages in the music are definitely very spooky and sinister. Some of the music could have been written for imaginary horror or serial-killer movies: there’s one passage where we hear a constant boink-boink-boink rhythm whose ambience conjures up images of an underground make-shift abattoir in a concrete bunker where unspeakable acts are being carried out with machetes on a blood-spattered platform. Music shifts can occur quite suddenly and randomly, making for a work whose emotional stability might euphemistically be described as somewhat fragile. Moods vary but most are of the foreboding, forbidding range of dark and sinister. Although the music is basically black metal, much of it quite repetitive, some of the best moments feature acoustic or near-acoustic guitar strumming against backgrounds of quite delirious droning noise effects suggestive of flying nano-bots weaving electromagnetic waves around you that effectively trap you where you are so you cannot escape the brainwashing. If that were not enough, the sounds of Tibetan droning music, complete with prolonged tones that streak the sky overhead with long reverberating plumes of echo, appear in an atmosphere of utter bleak emotional emptiness.

Well, that was Side 1 (the lighter coloured side, for those actually considering buying the album), or one side of the tape anyway. The other side is no different in spirit but is more industrial ambient and experimental in style; the Lord Time fellow who apparently is known by various names but here answers to the label of Andorkappen adds more industrial sounds and rhythms and musique concrete effects to the already insane mix, all blurred over by a sheen of gritty static sound. Vocals here are as spidery and skeletal as you can imagine in your worst horror-flick dreams when you see a human shrivel into fine powdery dust and hear his/her cries for help after contact with magically tainted soil. At one point early on this second side the music settles into a xylophone-like synth loop while gravelly animal voices natter away contentedly and little washes of sound nibble away at the edges of the soundscape, turning it into something more hellish as distant Dalek voices chant a strange and ominous litany. The music on this side of the cassette may not be as aggressive or dense as it was on the other side earlier but it is certainly loopier (as in more loony) as it takes us deeper into a labyrinthine madness. Things can sag while the piggy voices mutter among themselves and it’s quite late in the music when the banging rhythms pick up and a punky rock’n’roll sequence bashes its way into the spotlight. Finally another sequence of unearthly Tibetan religious droning and throat-singing, this time joined by a series of strange shrill cries that continue on and on, rounds off the music’s plunge into an everlasting black insanity.

Quite an experience to hear, even if only once, “Drink My Tears” is a highly original and brave piece of work demanding equally brave listeners to sit it out for nearly an hour. At first it seems chaotic but after a few hearings, I find the music cunningly well set out; it is immersive but not overwhelmingly so and while dense, it’s quite clear and fairly orderly.