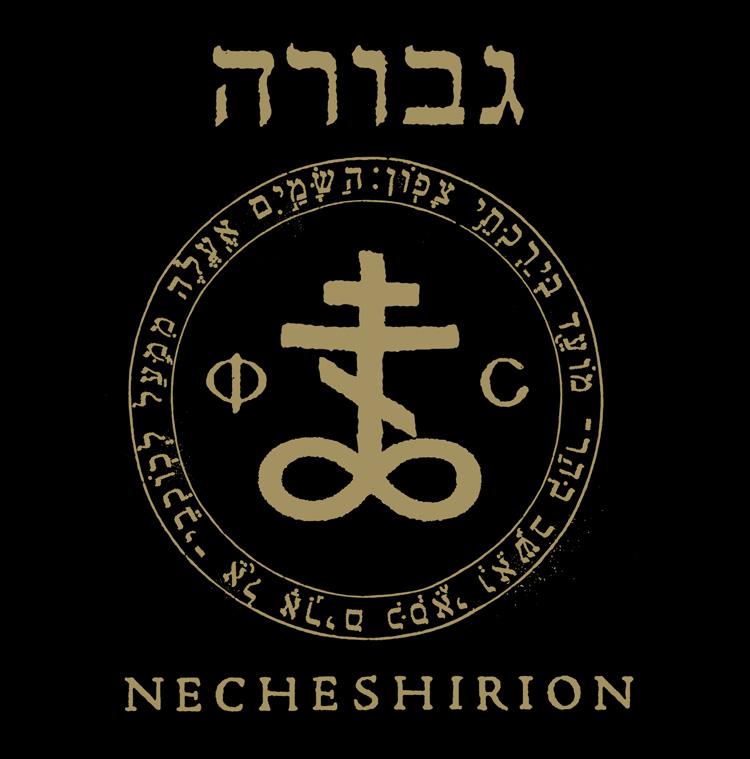 For a genre famously dismissive of standard organised religion in all its forms, especially those of the Abrahamic persuasion (Judaism, Christianity, Islam), black metal does occasionally boast some recordings that reference some of the more esoteric aspects of these religions even if superficially. Here might be one such recording, “Necheshirion” by a French Canadian duo called, er, Gevurah: the project name is derived from one of the focal points of the Tree of Life in the Jewish Kabalah. The album is a fast and dense yet melodic blackened death metal effort similar in style and approach of intense French acts like Antaeus. Apart from one song “Divine Ignition”, the music here makes very little reference to the concepts and imagery of mystical Jewish Kabalism; if anything, the lyrics across the album read more like appeals or pledges of loyalty to Satan and the rejection of the God of Abrahamic tradition.

With clear and sharp sound and production, plus a dense battery of guitars / drums / vocals in perpetual attack mode, the warriors of Gevurah ride forth confidently into realms of darkness to find union with the true forces of the cosmos. All tracks are robust in form and execution, high on passion and aggression, and explode with force, energy and speed at some point in their performance. This makes for a strong and forceful album, busy all the way through with drums in blast-beat frenzy, the guitars shredding like crazy in tandem and the vocalist roaring, declaiming and urging on battle in his death-metal best form. While the music is consistently good right across the five tracks on offer, the third track “The Throne of Lucifer” tips the edge over the rest by dint of its off-key moments, a dominant bass melody sometimes at loggerheads with the rest of the song, the raw peeling-paint texture of the guitars and the occasional trip-overs in the rhythms that might remind some of us of Deathspell Omega’s more jazzy moments. “Divine Ignition” is not far behind in the laconic, casual ferocity behind its sharpened chainsaw tremolo strings.

The album finishes on an extreme all-out-attack blackened death high with near-lunatic tremolo guitar burn-down and moments of sombre mood and solo bass guitar inserted in among the passages of shit-hot six-string blast. The moment passes quickly and listeners are left stranded in sudden utter silence wondering where the storm went. Some people may feel drained from the music’s sharp and jagged tones, the sheer sustained radioactive intensity and force of it all. Yep, “Necheshirion” is a test of nerves and endurance, severe in the lesson it teaches in the falseness of organised religion, the search for true faith and where it must lead if one is to attain union with the cosmos.

Gevurah (representing Severity in Kabalism) are well named. Interestingly for a band of their background, the guys include no atmospheric snow or wind sounds, folk music or references to Quebecois nationalism and the land on this album.