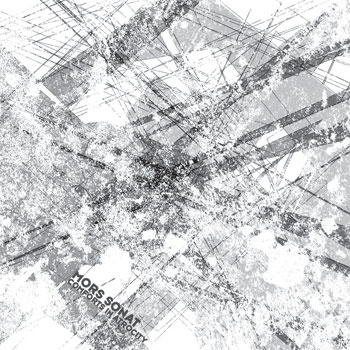 On paper at least, Mors Sonat boasts a respectable pedigree as the bastard child of Bob Nekrasov (Whitehorse, Nekrasov) and Mories of Gnaw Their Tongues. We therefore expect no less than a gigantic slab of intense and malevolent industrial / dark ambient / noise monsterism from the Mors Sonat debut “Comforts in Atrocity”. Well, the dynamic duo delivers but not necessarily in the way breathlessly anticipated by those of us who’ve been hanging outside the musical maternity wards around the clock night and day. Some of the better aspects of the two musicians’ work have combined in a subtle way to produce an album of darkly moody and occasionally demonic ambient soundscapes with a careful use of effects, sound tones and textures, and treated vocals. Some genuinely creepy and terrifying work can be found here without the more cartoonish and gruesome serial-killer kitsch tendencies of Mories’ Gnaw Their Tongues project.

Early tracks gradually bring about a vision of bleakness and unrelenting hell; one detects the sure hand of Nekrasov in describing and building up insidious horror on a track like “Sanctuary in Soil”. Come to “The Vengeance of Embrace” with its layers of metallic reverberations and ululating-dog drones and you start to detect an undercurrent of derangement and theatricality; the track is quite disciplined though in the way it unfurls its richly vibrating metal tones to reveal its insane essence. By contrast, the title track is a strangely soothing and beautiful creature possessed of a demonic spirit being. The duo reserves active fury and terror for the final track “So shall I weep in Liberation within the Ecstasy of Death”, a work of gibbering monster voices, screechy high-pitched drones and constant high-pressure background static steaming away.

They’re all good tracks but they suffer in being much alike in structure: they’re not much more than ongoing rhythm texture exercises and one gets the sense that they’re being run through their paces without much challenge to their potential for drama and viciousness. It’s a pity that five tracks should escalate through tension and mounting horror towards a track that should reveal a final message of utmost terror and everlasting torment but which ends up not delivering on what its predecessors hinted at. Even so, the journey has its fine moments and the goal might not necessarily be what “Comforts in Atrocity” aims at: it is a first effort after all and perhaps Nekrasov and Mories were erring on the side of caution and taking things slowly and gradually. You don’t want to accidentally blow the planet apart on your first collaboration together before you’re even sure that that’s what you want to do.