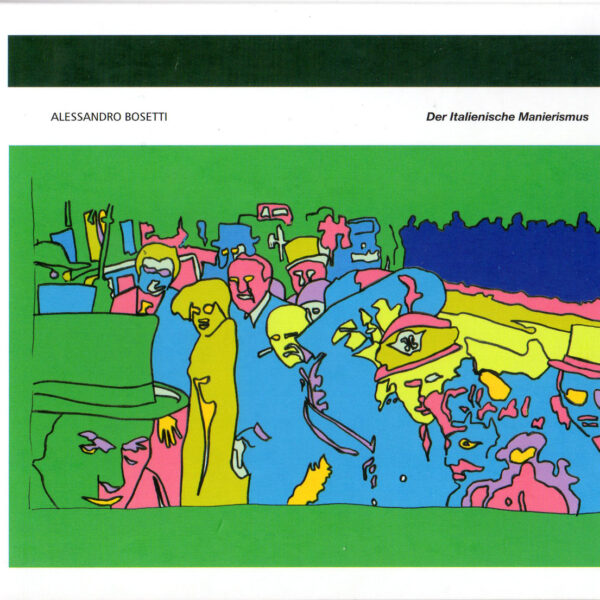 Alessandro Bosetti‘s work grows more complex and more fascinating with every day. The first things I heard from him were rather enigmatic assemblages of field recordings and sound art, but in recent years he’s become more focused on using the voice – quite often his own – to make dazzling pieces of sound poetry, cut-ups, song-speech and unclassifiable statements, some of them within the context of his post-jazz post-pop trio, Trophies. Der Italienische Manierismus (CON-V CNVCD006) is a collection of seven unrelated pieces, all of them quite astounding, and making different observations about aspects of cultural history in the most eclectic way possible. If it weren’t for the artist’s notes in the enclosed press release, I’d have no idea where to orient myself. The abiding theme is to do with “mannerisms”, hence the title – Bosetti freely owns he is drawn to the contrived, the artifice, the stylised and the mannered in art, whether from the renaissance or baroque periods, and translates these preoccupations into his extremely rich sound art. Just starting off with ‘Rosso’, for example. The music itself is a thick layer of abstract electro-acoustic noise, underpinned by Bosetti’s own melodic doo-wop styled backing vocals, and is extremely puzzling. It’s something to do with “rhythm and drapery”, as if Bosetti had spent months studying the finer points of how folded cloth was rendered in Italian renaissance art, which he probably has; and then found a way to translate this visual information into sound art.

On ‘Fantozzi Vs Dalla’ the artist claims to be paying tribute to two popular Italian singers. I suppose one of them was Lucio Dalla, the singer-songwriter who died in 2012, and was one of many post-war musicians dubbed “cantautori” who spoke to a disaffected generation with their lyrics about society’s ills 1. Dalla also loved opera, jazz, film soundtracks, football, and made many best-selling records. Bosetti is a fan, but declares he prefers the “early yells” of these singers. On the track here, the sampled voices of Indra Klimaite and Valentina Picello are rebuilt into strange barks and discordant parodies of opera singing, wailing in alien fashion over a layered woodwind drone. This is the deconstructionist approach taken to a remarkable extreme – it almost lays bare the mechanics of popular song, reducing it to a disjointed yet strangely beautiful sequence of events that don’t quite match up.

Another enjoyable piece is ‘Sigmund Holmes and Sherlock Freud’, which at three minutes is almost a throwaway piece in among this clutch of more serious essays, but it’s sumptuous. Described as a “madrigal soaked in reverb”, it’s like the evil ghosts of The Beach Boys surfacing from a nocturnal ocean with twisted, Gesualdo-like harmonies emanating from their pallid lips. The title here is something which I’m sure Anthony Burgess could have made into a perfect short story.

‘Dolce Stilnox’ is one of the slightly less challenging cuts on the album, with a musical backdrop that could almost be mistaken for lite-funk disco music with its rubbery pulses and electric piano samples, but even here the genre has been turned in on itself in a highly mannered fashion, producing a music that’s almost a sarcastic parody. The art dimension comes from the sampled voice spitting out fragments of disjunctive phrases, apparently taken from “insomnia drawings”, whatever they may be.

There are also pieces about the writings of Proust and one derived from a study of the avant-garde poet Corrado Costa (the insufferable ‘Our Positions’). I was more drawn to ‘It Is An Island’ which is dedicated to Guiseppe Arcimboldo, the painter who made figures and faces from assemblages of fruits, vegetables, animals and so forth. Since Arcimboldo’s one of my favourite painters, I had high hopes, but the track is one of the most mannered and irritating pieces on an album which, some might think, is already being too clever for its own good. Bosetti’s voice intones in dry emotionless fashion, describing a landscape in minute detail much like some 18th century Romantic poet or novelist. Gradually his verbal descriptions are overlaid with sound effects and field recordings, to bring the tableau to life with the sounds of water, wind, beach and birdsong. It works well on paper, but it’s not an easy listen – the edits are deliberately jumpy and jarring.

Lastly I ought to mention the cover art, which is almost a direct lift from the work of Peter Max, the American poster artist who was incredibly popular in the 1960s with his watered-down appropriations from psychedelia and hippy culture. If I am right, this pastiche-of-a-pastiche fits right in with the intentions of this very unusual record. Arrived September 2012.