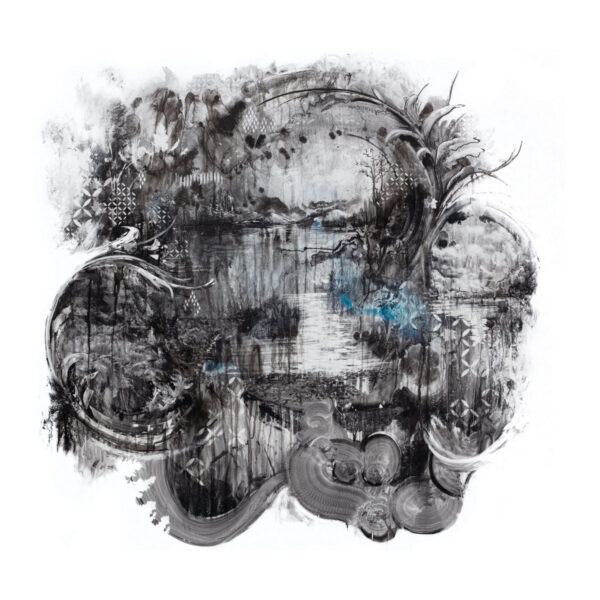 Pianist Lubomyr Melnik plays continuous minimalist piano music in a way that makes his style comparable to minimalist black metal tremolo guitar riffing as well as to the more Usual Suspects in minimalist music like Charlemagne Palestine and Steve Reich. As the Aquarius Records website notes, Melnik’s technique involves depressing the piano pedals which allows the notes to blend into one another and create layers of shifting overtones which in turn build up lush and ringing soundscapes that constantly shift, never remaining static enough to just “be”. The music is always in the process of becoming. “Corollaries” is the result of a meeting between Melnik and violinist Peter Broderick at a music festival in Cologne: the two collaborate on four of the five tracks on the album. As might be expected, Melnik lays down a basic melody structure which flows wherever it will, taking Melnik with it – the pianist enjoying the ride that his fingers lead him on – while Broderick improvises over and in response to Melnik’s groundwork.

“Pockets of Light” is a beautiful and delicate work with a wistful air of longing thanks to Broderick’s very soft and almost meditative vocal. Violin is incredibly sparse and seems to come near the end so the track is almost a solo piece. “The Six Day Moment” is dominated by a deep motif played by Melnik’s left-hand that pulsates and surges back and forth like a living creature in danger of being beached by a heavy swell upon a beach while a light tinkly melody dances over it in the manner of annoying little seagulls hovering close by. The track is melodramatic in parts and comes quite close to weepiness and kitsch Romanticism but the rules that Melnik must have set for himself in playing continuous piano prevent the music from descending too far into sentimentalism.

Subsequent tracks are more restrained in the virtuoso piano playing but possess their own charms: Broderick’s violin commands attention on “A Warmer Place” by its steady drawn-out bow work in spite of Melnik’s hyperactive playing; and “Le Miroir d’Amour”, the most conventional sounding of the lot in its structure and a bit of a disappointment compared to the other unorthodox tracks, throws the spotlight onto the violin’s maudlin tune and Broderick’s own accomplished playing while Melnik’s piano follows close by. However it’s “Nightrail from the Sun”, featuring guest musician Martyn Heine playing soft droning guitar feedback, that steals the show from the rest of the album: it’s a bit slow to get off the ground but once airborne, the track zings off at manic speed, powered by the interplay between near-demented piano shimmer and six-string drone moanings.

The music is strongly atmospheric and its emotions range from melancholy and longing to sorrow to an urgency bordering on anxiety and obsession. Some of the piano work can be maddeningly relentless in its repetition and just listening to it on tracks like “Nightrail …” gives my own fingers, untutored in the Way of the Ebonies and Ivories, a feeling of repetitive strain injury. Some of the emotion on the two later tracks can be overwrought and I wonder if it might sound a bit forced and manipulative for some listeners. There are times when the music does appear carried away by its own momentum and the space in and around the flow of the music seems neglected as a significant element in its own right.

On the whole, “Corollaries” is a lovely recording to listen to when you find yourself alone on a grey miserable day and you need something that shares your feeling of mild disquiet and want of company.