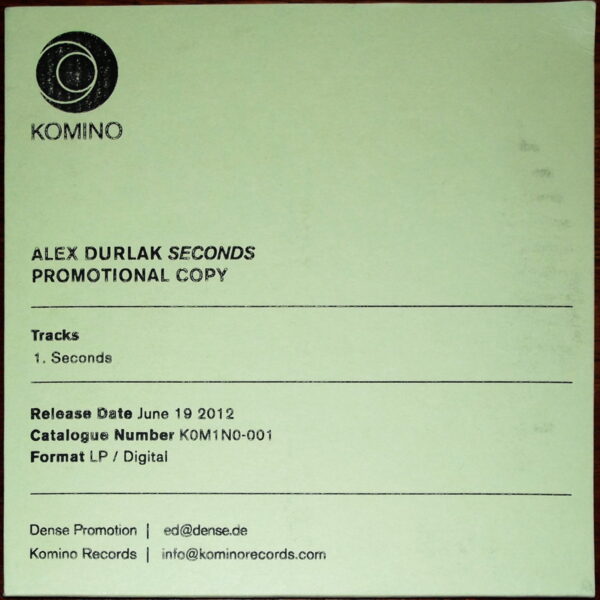 Some quite nice processed guitar work from Alex Durlak. His Seconds (KOMINO RECORDS K0M1N0-001) release is just 20 minutes long but you only have to spin a short tract of the music to realise that hours, perhaps days, of effort have been poured into the creation of its deep, burnished layers. A series of improvised guitar bursts were recorded in one take, then fed through the magic “granularising” process boxes, resulting in shimmering and pulsating fields of ominous and neurotic foliage. This Toronto-based musician has found a more amenable manner of crunching up his guitar into weighty, overladen chunks than that employed by his countryman Aidan Baker, dare I say it. Although I only have a promo copy housed in a nondescript green wallet, the release in fact exists as a single-sided white vinyl LP, with a printed Algernon Blackwood story to peruse while you dig your head into the throbbing grooves. Given that Blackwood was most remembered for his ghost stories, it’s interesting to speculate whether Durlak is also inspired by ethereal phantoms from the “other side”. (20/09/2012)

Last noted City Surgical in 2011, when Jennifer Hor was very taken with Ryan Reid‘s avant-garde approach to ambient music in the “isolationist” style. Now here’s his second album Dilaudid Day (NO LABEL), another self-released item sent to us from his New York home. The title track is divided into four parts, amounting to some 20 minutes of very compelling and focussed electronica of mesmerising proportions. City Surgical is extremely creative with his sparing use of filters and effects, manipulating his output like a painter softening the edges of vermilion and ultramarine with a wide paintbrush and plenty of turpentine. I also like the way he doesn’t feel compelled to change the tone every ten seconds, unlike some restless types whose fingers dart across the keyboard in random ways – once he’s found what works, he sets it in steady motion like a heavy duty vehicle with steel-belted tyres. This isn’t vapid droning; rather, the music is underpinned with a muscular framework of near-subliminal beats, which pulse insistently in highly hypnagogic manner. Besides the four-part centrepiece, there’s also the sumptuous ‘Guajara Mirim’, a rich feast of wobbly melodies, with heavily manipulated and denatured synth sounds, all set to a smokified dubby beat. Introverted and close-lipped, the whole album does indeed have a strong “isolationist” feel, the music sealed off in its own hermetic world of beauty. Very fine presentation, screenprinted artwork on black card, with an image of the malignant dwarf killer from Don’t Look Now. (18/09/2012)

Life Best Under Your Seat (COPY FOR YOUR RECORDS CFYR014) is a solo creation from Ferran Fages, who we have heard as one half of Cremaster and occasionally as part of the trio Atolón. This 36-minute electroacoustic piece is certainly one of the most minimal releases I’ve heard on this label, which is usually the go-to supplier if coarse and abrasive computer hacking music are part of your required intake. It might also be one of Fages’ most restrained and hard-to-hear works yet published, and given his general penchant for unobtrusive avant rumblings, that’s saying a mouthful. I admit I tend to lose patience with releases whose liner notes suggest I must rearrange my speakers / adjust volume accordingly / use or don’t use headphones etc., simply to appreciate the intended aural nuances, but Fages’ manipulated sinewaves here do eventually start to assert their presence in unexpected ways. It’s surprising how slowed-down it all feels; Toshimaru Nakamura’s nervy feedback music from 12 years ago now seems almost like speedcore techno or grindcore punk in comparison. (09/08/2012)

Always a pleasure to hear from Miguel A. García, who often records as Xedh. I enjoy his very direct and sometimes quite noisy / primitive approach to manufacturing electronic music. On Cuculacanto (ESSENTIA MUNDI EM017), he has linked his sun-bronzed arms up with a Galician composer, Carlos Suárez. This award-winning electro-acousticician has also made a name for himself as an ethnomusicologist, and has transcribed a great deal of traditional / ethnic music from around the world. However, I would guess his heart belongs to South America, considering the amount of time he has spent in Venezuela, Chile, Peru, Brazil and Argentina, capturing whatever life-essences he may with his microphones and recasting them in his very evocative soundscapes. Even the title Cuculacanto is a direct reference to certain tribal cultures that he understands so well. In this context, it seems García is content to look up at his idol in admiration as he works in the orbit of the maestro. In his notes, he has nothing but praise for the strong artistic vision of Suárez, and considers his music a direct expression of the composer’s personality. García is another who likewise hews closely to his own personal expression in music. For this well-matched collaboration, little communication between the duo was apparently needed, and they were able to evolve the work in a near-subconscious manner. It’s an admirable artistic methodology, and the resulting music certainly has a distinct and palpable other-worldly reality, even when it sometimes feels slightly undefined and uncentred. The listener is returned to a primal state, meandering in concentric circles to the depths of unnamed caves and tunnels, while head spins in a haze of coca-leaf chewing. Allusive and trancey “ceremonial” sound art, which deliberately avoids being too specific about anything, and is extremely enjoyable and resonant.