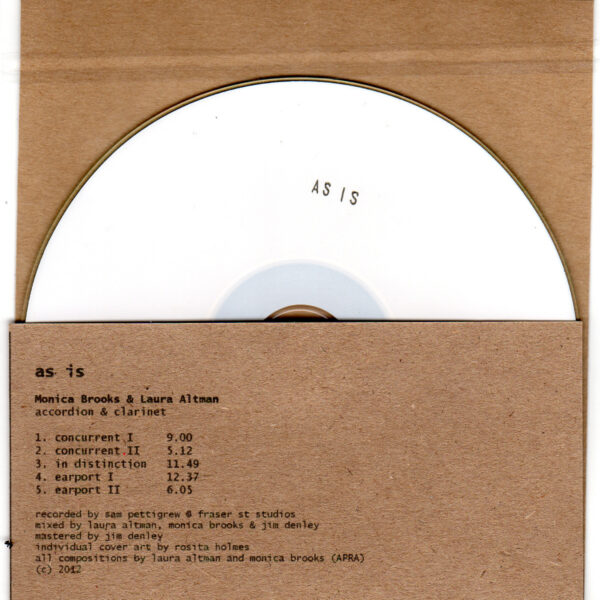 Curious CD from Sydney. Very spartanly presented, very spartanly instrumented. Our two antipodean artistes utilise on this recording accordion and clarinet, respectively. Both make tentative enquiries in the higher registers of both instruments and use extraneous and ephemeral effects of non-standard physical sound generation, what is known as “extended technique”. The extended technique is not extended much further than these quiet high frequency forays, however; restraint, or hesitancy, is the order of the day.

The restrained and reduced instrumental approach might ordinarily be an encouragement to deep listening, go deep here and you find yourself contemplating mass transit systems, airport terminals, the undersides of caterpillar treads. Potentially uncomfortable places to rest for any length of time. These intimated locations remind me of certain scenes in Patrick Keiller’s films: long, static shots presented in a documentary manner of localised manifestations of global capital such as highly automated ports and out of town shopping centres. Places often edited out of existence (understandably) by the psychic censor.

The title As Is suggests that this disc is conceived of as a verité document, the results of an experiment presented for inspection. Extrapolated, perhaps it is the situation of two artists negotiating their wider real-world context. We hear the dry sounds of a fragmentary indoor busking, unwilling to be heard, the two wind instruments doing a fair impression of the slow squeak of metal grates against the distant backdrop of diesel generators and diggers reversing. The specific (muted) urban-industrial backdrop that is sharing the acoustic space is throughout a tonally confusing monotone alongside the (spare) musical information. Subdued shadings in chalk and charcoal on concrete walls, faint luminescence of contradiction.

Apparently As Is was recorded in a ‘concrete room’ in a former brewery in the middle of multiple construction sites; the low growling grey concrete dust of the metropolis is a constant throughout all tracks. Despite being enclosed within a building, the low-frequency sounds of mechanised urban activity still manage to seep in, subtly crowding the acoustic space. In between silences, underneath quiet sustained high register pitches, the muffled rumble of activity sits discomfitingly under what might in another context become delicate interplay.

However rather than interplay, the two distinct aural elements come across as mutual incompatibility, a contrast highlighting an underlying tension or even antagonism (at least in the configurations attempted) – there may be more specific dialectical implications to be teased out here by those with the inclination. The only time that the artists seem to compete with the background noises of the playing environment is when they move briefly towards the lower register or make more definite gestures. In the third track, ‘In distinction’ (a telling title?), the tonal spectrum broadens to include lower instrumentally-generated pitches and more movement. This indicates a way out of what can seem a fitful impasse. It turns out to be only a brief moment. Perhaps the artistic decision was to throw such brief moments into relief by surrounding them with determinedly introverted and self-effacing playing?

Much of the rest of the album involves tones which are dissatisfied with their own audibility, which seem quite happy and relieved for a reprieve from the task of making a sound when a passing delivery van or dropped pen takes centre stage. In some ways this can be confusing, certainly leading to an unsatisfying listening experience, in others it perhaps contains something of the Taoist approach to confrontation, making a virtue of weakness.

The uncomfortable contrast between the tentative, de-centred, lop-sided approach of the duo and the noisy construction activity occurring in the same soundfield induces a mindset in which speculations on the relationship between the personal and industrial, entertainment, art, commerce and capital occur and within such a framework demonstrates two peoples’ own oblique strategy when confronting such questions. Rather a dry subject when framed and limited in this way. Still, although in some ways frustrating, there is food for certain modes of thought here, if not much for the ears or the more exuberant areas of the psyche.

What we can say definitely, concretely, at the end of this is that this is ‘as was’, these sounds were performed in this particular situation. Reasons and results remain notionally obscure, coloured by a murky wash of exhaust particles. This very obscurity of hidden purpose may hold a key to understanding, though. The plain presentation, lack of adornment or transformation is the essential nature of the artefact. Not seeking to construct an imaginationally transfigured situation it invites us instead to contemplate the implications and nature of a specific real-world nexus of different human activities.