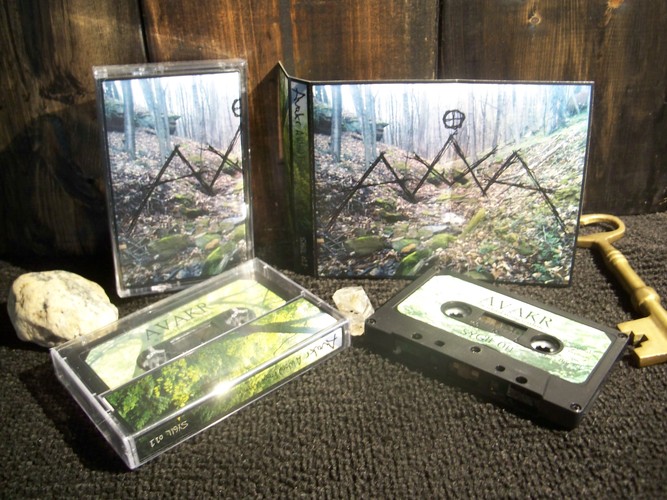 Black metal is currently flourishing in the United States like there’s no tomorrow; the phenomenon, interesting in itself though it is, might be a troubling barometer of the social and cultural health of the country. That a music genre often associated with a dark, pessimistic, apolitical and despairing, even nihilistic outlook should be thriving across the land might not say much positive about the state of American society. Anyway, we go to Indiana state this time to find there a new duo, Avakr, who have released their debut recording “A Word from Within” on the Sygil label. This album is a raw and ferocious beast musically but the track titles also suggest lamentation at the passing of time, the feelings of sorrow, longing and perhaps regret for lost opportunities that arise as a result, and a small spark of hope that a new clean world might be born eventually. (The band members’ interests are actually shamanism, native American cultures and the occult.)

It whizzes by in just under 35 minutes but the album packs in a fair amount of music ranging from brooding acoustic melody to raging BM guitar noise blasts. Production is fairly basic but everything can be heard clearly – Avakr stick to a basic set-up of vox, guitars and drums – and the cymbals can be very sharp and crisp. Guitars concentrate on generating a tremendous tremolo thunder racket most of the time and the drums hammer away in support. The vocals are often shouty, ragged and hoarse. Repetitive riffing fills out most of the music.

The title track is the most distinctive out of the four songs on offer for its riff work, grinding over and over and changing quite subtly while vocalist Tucker Thomassen screeches his heart out. The song features an intensely blazing instrumental passage and a rhythm section that hews into a darker mood near its end. “Last Day of Autumn” is a brief instrumental piece notable for its mix of quiet, almost weeping acoustic guitar and blasts of guttural BM guitar roar behind it. The rest of the album is good though repetitive and monotonous in parts. Vocals are never less than throat-shredding haranguing.

A good start for a young band, this album boasts very impassioned and intense music full of fire and anger along with hints of tenderness and hope.