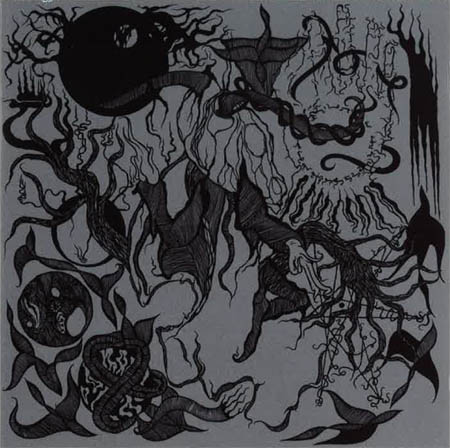 Released by Turgid Animal Records, run by self-proclaimed mutant ape fella George Proctor of White Medal renown – I bet he’s glad to know another little mutant ape has recently been born with a silver banana in its mouth and been named after him – this split recording by noiseniks Skullflower and Utarm is a sure and steady sonic borer drilling exercise penetrating deep into your mind and unconscious where it really hurts. The split album is one of a number of splits that Skullflower have been creating with a number of black metal acts which reflect the growing overlap between noise and black metal, and an acceptance of the latter as a genre adaptable to abstraction, experimentation and fusion with other underground music genres.

The Skullflower duo grab the first three spots on the recording with their mix of digital noise, blissful rolling tremolo guitar lines, searing guitar choruses and atmospheric paranoiac dread among other layers of noise texture, effects and melody to create sprawling vistas that include terror and tranquillity alike. The first track is a leisurely ride through bristling noisescapes: quite sunny and pleasant for this genre, which might be a surprise for those expecting something dark and sinister. The second track performs to expectations: long winding six-string drones attract fragments of noise RNA that wrap themselves around the drawn-out tones and then blat squiggles and scribblings into empty metalloid spaces. The path of the droning music is sedate in contrast to the sounds that pullulate at alarming bacterial rates and the unease they instill. Third track “Ruby Ridge”, recalling perhaps the 1992 stand-off in Idaho state between a family of religious survivalists and three US law and order agencies that resulted in three people being shot dead in highly controversial circumstances, mixes overhead black-helicopter ambience and growing paranoia on the one hand and a strange comforting reassurance and blissful serenity on the other.

Utarm brings along two very frightening pieces of almost hyper-operatic drama and intensity: the first piece is a spooky, ghostly entity of floating grainy feedback and echoing lost-astronaut voices, with a sharp sound that burns deep into the skull; and the second contribution is a might metal monster of massive feedback droning, distorted monster voices breaking up into echoes, and delicate tolling bells. Most frightful of all perhaps is an atmosphere that alternately fries with simmering noise quarks and swallows up screams in a cloud mist that seems to glide in and out of the track.

The soundscapes here are vast and amazingly placid for all the jarring abrasion they create. While Utarm may insist on adding something mind-blowing on his second piece, the music is actually very restrained for the most part. While Skullflower might insist that deep down they’re normal folks who just happen to like playing with noise and mucking about with our heads, Utarm demonstrates how he finds the normal world around to be even more deranged than he is. It’s easier for noise and black metal to meet and merge than it is for Utarm to adjust to living in the eternal mental asylum everyone accepts to be the norm.