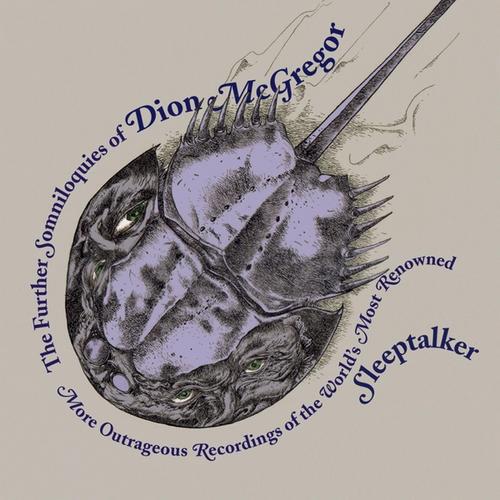 Holding my breath for over a decade for another collection of slumber soliloquies by Dion McGregor was excruciating at times and threatened to pop my eyeballs but the wait’s been worth the damage: this set of 25 would-be one-man drama performances definitely does not disappoint. Fully formed scenarios that might come straight out of day-time soap opera or prime-time reality TV, often transmitted in ways to suggest two entities were at perpetual war within McGregor’s feverish unconscious mind, range from party games to bizarre lists, a tour inside a labyrinthine TARDIS-like house, visits to the future and visits from little extra-terrestrials in one’s backyard. Compared to the “Dion McGregor Dreams Again” CD (Tzadik, 1999), this one is slightly cleaner though it does have its hair-raising moments and just might pass muster as general family entertainment with an MA rating. The emphasis seems to be on multi-dimensional travel through time and space.

Leading off with “The Scavenger Hunt”, in which participants must find the most improbable items such as the Chattanooga Choo Choo, the swan from Swan Lake, David Susskind’s mum and someone called Nobody along with his sister, we slime our way through a new dance called “The Snail” and spin a tray of chocolate eclairs, of which one is laced with poison, in “Food Roulette”. We watch Myrna Mango performing the “South Sea Squirm” while surrounded by cat-calls and stare with voyeuristic relish at the tiny inhabitants of “Midget City” along with the proud pet-shop owner-narrator. We’re hurled into the future world of “Tenses” for which the expression “be careful what you wish for” is never more apt as life is measured out in beads on a string. Another whimsical SF fantasy is “Snowflakes” in which McGregor discovers each snowflake on the ground is a planet with its own people.

Funniest track of all though has to be “Snail Time” which reprises the dance of “The Snail” with the appropriate dance rhythms and accompanying song and adds a deliriously demented dialogue in which McGregor instructs his female dance partner on how to say “I am Dolores” in English. (Of course, the mincing shy-lady talk is McGregor’s own voice.) The “Mansion For Sale” runs a very close second: a real estate agent shows prospective buyers through a house that turns out to be a veritable torture chamber of fiendish instruments of punishment. The “Raining” track features idioms and free-forming word associations that turn into reality as raining cats and dogs come alive only to be impaled by pitchforks and drowned in urine. “Down From the Wall” features unusual abseiling activity that literally ends in objects falling and crashing as does also “The Horseshoe Crabs”.

As expected, several of these tracks end in McGregor screaming himself awake – small wonder that he ever got much sleep or was able to function properly during his waking hours. One thing with this CD is that it has to be played fairly loudly as the age of the original recordings when they were transferred to CD and the background traffic noise ambience on them – McGregor was living in New York City in the 1960s at the time – can soften and blunt some of what he says and obscure the tone of voice. Each track follows its own logic which can sometimes be dictated by the words used and their multifarious meanings and associations. Etymologists and psychologists will have a field day trying to sort out the train of word associations and their possible meanings.

Recent sleep research suggests that McGregor would not have been dreaming during his ramblings but instead his unconscious mind would have been processing and sorting out all the various inputs past and present received by his senses. That his somniloquies have a strongly cinematic structure is not at all surprising when one considers that McGregor loved watching movies; some of the dialogue heard and most of the scenarios he goes through sound very much as if they were lifted from Hollywood flicks and made to serve whatever his unconscious mind was mulling over.

Once again, if you need something to hold your friends spellbound at parties – plus some ideas for party games like scavenger hunts, spin the cake stand or how to decorate the house for prospective buyers to inspect – don’t go past this bizarre collection of screaming (not dreaming!) mad mono-slumber-logues!