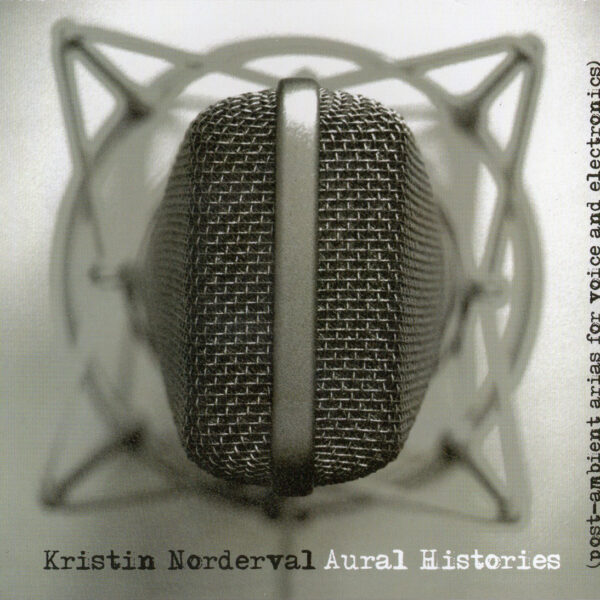 The simplest things are sometimes the most difficult to master. Breathing for instance. Try counting 50 breaths without thinking of a football score, or coordinating breath with complicated body movements. Try slowing down to 10 second breathing ratios. Try vocalising as you inhale as well as exhale. Not so easy, unless you are one Kristin Norderval. her ‘stories without lyrics’, compiled in this CD cover more than a decade of focused experimentation with the breath and the vibrations it carries. The selection of 10 ‘post-ambient arias’ ranges from vocal-based to purely electronic, the subtlety and intricacy of which better merit a listen than a write up. Several were in fact composed for dance performances, though how something often resembling laptop musique concrète translates into kinaesthetic action is something of an enigma.

Three of the pieces (‘A Flat Ground’,’ A Summons’ and ‘Circadian Singing’) utilise a single-take improvisation as their sound source, though the post-recording work was presumably quite intensive. The first (recorded 2001) – a decade the junior – is the most involved, its echoing, Seurat-like layers of sedated sighs summon up Bjork’s Medulla’s thick, moonlit seascapes, traversed by Tim Buckley’s Starsailor. It would sound comfortably at home on David Toop’s superlative compilation, Crooning on Venus. The latter pieces are more subdued and spacious; the singer’s early predilection for more detailed tonal textures sublimated into more isolated venues for fricative trills and gasps, and inhalation/exhalation enunciation.

Elsewhere, the voice is supplanted by machine as the primary sound source: coffee makers, microwaves, incubators, antique motors and Mexican radio among them; all are processed and incorporated into a finely-spun whir that frequently intrudes on the foreground figure(s). In ‘Glass and Mirrors’ for example, Norderval’s dream world appears to have been permeated by Annea Lockwood’s glassy, glacial resonance – its amorphous tendrils grasping intangibly at her liquid lyricism. Inspirations, another of Norderval’s ‘meditations on breath’ evokes a riverboat diva forever adrift on a Moebius strip of water, her suspended soprano register punctured and thwarted by fragments of cottoned brass; vexed by the seeming endlessness of the mechanical dreamscape.