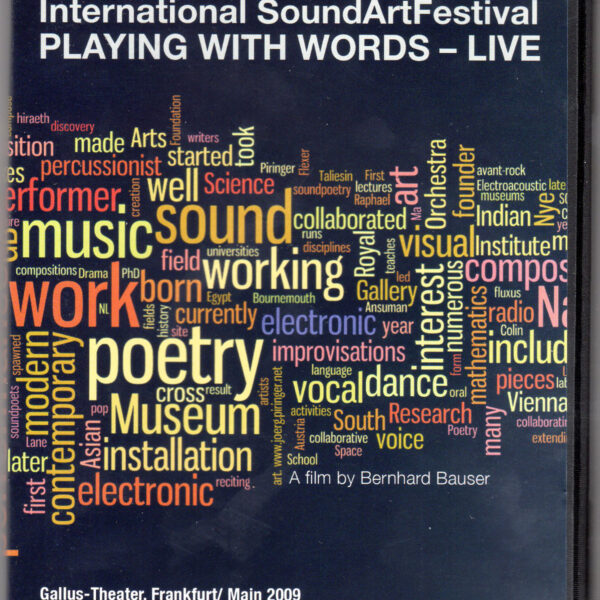 This DVD is a video document of the live sound art and spoken word festival ‘Playing with Words’ that took place at the Gallus Theater, Frankfurt on May 21st, 2009. The festival was part of collaboration between Kulturnetz Frankfurt and CRiSAP (Creative Research in Sound Art Practice) at the London College of Communication, a project that also yielded the anthology Playing with Words: The Spoken Word in Artistic Practice edited by Cathy Lane. Having generated some positive reviews, the anthology looks set to become a key work in its field. It brings together some useful texts by complimentary practioners who are rarely collated within such a cohesive frame. Although not as comprehensive due to the obvious restrictions of the event, Playing with Words: Live is just as valuable as the anthology particularly because it dispenses with theory and presents practice: sound art offered and understood as an act of performance.

Shot by Bernhard Bauser, the DVD features footage of each of the 6 international participants: Nye Parry, Sianed Jones, Ansuman Biswas, Jaap Blonk, Jörg Piringer and Dirk Huelstrunk. Although ‘sound art’ is a broad church this was not an evening of ‘tablecore’, noise or electronic music despite the use of digital technology and various forms of manipulating amplification. The focus in each case was on the range, potentialities and extremities of the human voice. Each artist took the voice (their own, and in the case of Nye, that of his friend Gordon McPherson) as their primary instrument and the performances set about deconstructing its abilities as a generator of sound.

This obsessively sonic remit along with the bare theatre setting begs the question why go to the trouble of releasing a DVD at all? Surely this could have been better served as a CD to parallel the book?

Well, no actually. What the DVD shows is importance of the visual information in the understanding of the performative and material aspect of sound art. For instance, whilst Blonk creates extraordinary sounds the key to understanding his piece lies not in trying to translate or decode that which is heard. Instead the significance is connected to the way he tugs and pulls on his throat and face to actually produce his sounds. His voice is used as an incorporated instrument, one that projects itself out into the air but is at the same time embodied within the architecture of the larynx and mouth. Much the same can be said of Biswas and Huelstrunk. They both start with breathing techniques and short grunts which build into contorted, seemingly glossolalic articulations. Biswas’s is the more conceptually defined of the two performances, taking the form of a fractured, self- conscious lecture that struggles to bridge theory and practice. In both cases though, it’s essential to see the actual manipulation of the voice in order to get a sense of it as a corporeal entity.

There’s a different but no less important emphasis on visual meaning in Piringer’s piece, the first one on the DVD. The performance involves the repetition of individual letters which are gradually accumulated into a modulating drone. This is also played out alongside a projection screen that shows similar letters spread out, colliding and overlapping. His vocal work with the phoneme is thus reflected in the spectacular pile-up of corresponding graphemes. There’s the obvious influence of concrete poetry here (Ernst Jandl comes to mind) but what’s distinctive is the animated nature of the projections. This permits typescript, that which is usually spatially determined, to be included into the temporality of the vocal performance as it moves up, down and across the screen.

In the case of Parry and Jones, the visual impact of their performances comes with their use of self-accompaniment. Nye works with a disassembled answer phone message broadcast via a portable stereo and Jones uses a violin during her extended vocal performance. These instruments initially work as support to the voices of Nye and Jones but they are gradually integrated into the looping structure of the performances themselves, suggesting a wider interest in echo, feedback and dialogue.

Playing with Words was obviously a fascinating event. The DVD is a slightly riskier prospect because these things can so easily become souvenirs: interesting only if you happen to have been there. What redeems this document is the consistency of the performers. As sound artists they’re working with very different methodologies but seeing them together in succession brings out their collective rationale. There’s clearly a reason why they should be on stage together and that’s the reason why you should watch this.