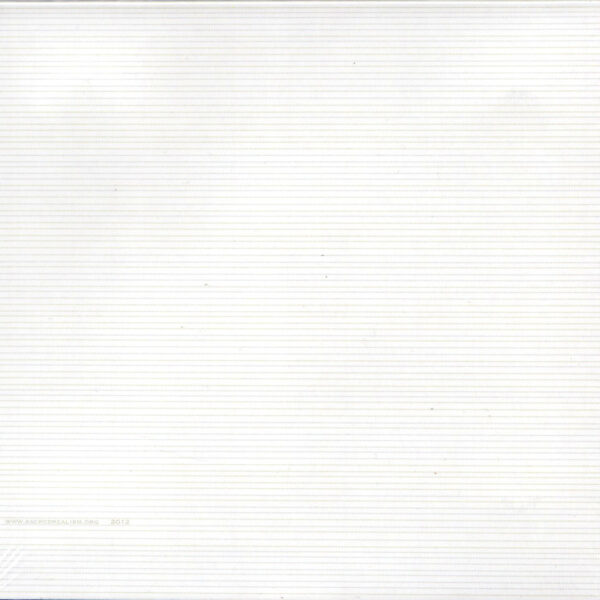 Here, we enter the murky waters where art collides with music. Untitled #12 (After Agnes) is the first release on a new American imprint: Sacred Realism. An apt name for a label that is prepared to release this challenging piece of music. The key to Untitled #12 (After Agnes) is slow development. I mean, glacially slow development. At first listen, it’s a grey, almost featureless wash of buzzing and hums – not a totally inappropriate sonic environment for viewing the painting Untitled #12 by Agnes Martin, here reproduced on the inside of the digipack. The sleevenotes state “this is a realization of a generative work.” Ok, so this is a portion of something a whole lot bigger. I’ve been intrigued by the generative audio/visual work 77 Million Paintings by Brian Eno, which I saw at Fabrica in Brighton in 2010, but this idea of a constantly evolving piece needs a visual element to be truly successful, in my opinion. By simply referencing an existing painting without so much as an explanation even as to why that particular painting was selected, seems disingenuous. All is not lost! The sleevenotes go on to point out “A stand-alone application for OSX can be downloaded at sacredrealism.org/untitled12…” – so that’s Mac users catered for; if you want to run it on a pc you need to involve SuperCollider but Sacred Realism helpfully provide instructions on doing so. So, if you opt to download this application, you then have access to the work as a whole, which I’m sure will dwarf the cd release, but I’m still not sure if or why I should engage with such a big commitment.

Turning, then, to the accompanying press release, (although I presume the information contained in this text would not be available to help someone standing in a record shop – or art gallery shop – deliberating whether to purchase Untitled #12 (After Agnes) or Steve Reich’s It’s Gonna Rain), which states “a starting point for listening to nothing”. In my mind, this statement is key to understanding the work. And, I think, the reason the work exists in the first place. In fact, I think this statement is so important, I’m going to type it out again, for emphasis: “a starting point for listening to nothing”.

Actually, now I’ve had a chance to explore it, the Sacred Realism website does state “this piece is not a ‘”translation” of the painting, but a starting point for listening into nothing.” There. Now I’ve typed it a third time. But this has really hit a nerve with me. Here’s a short, personal anecdote which I think has some relevance: when I was a child I remember I would fall asleep at night trying to “see” the colour of nothingness; of the dark behind my closed eyelids. After around fifteen minutes of hard concentration, this would sometimes produce results; a perception of the “colour” of nothing…

Does Untitled #12 (After Agnes) produce results? Hmmm, I’m not sure. Or rather I’m not sure what the intended results were, or whether the music really satisfied the composers’ brief. With Untitled #12 (After Agnes), we are being invited to hear the sound of nothing; consider the sound of nothing. But, existential concerns apart, why would anyone want to do that?

Depending on your mood, this album is either an unwelcome exercise in reduction or pleasantly womblike. The reality of the situation is an hour of “…tuned white noise and sine tones…”; a kind of machine-drone white noise; a featureless landscape of inoffensive bit-crushed throbbing, which, for insomniacs could be useful.

Ultimately, it is hard to recommend this for close listening as without the employment of very hard concentration or improper use of psychotropic chemicals this record struggles, really, to stand up to repeated listens. You could say that Lamb and Eubanks are pushing the definition of what is music. But this is music you can understand and appreciate as a concept – you don’t have to actually listen to it. Which makes it concept art.