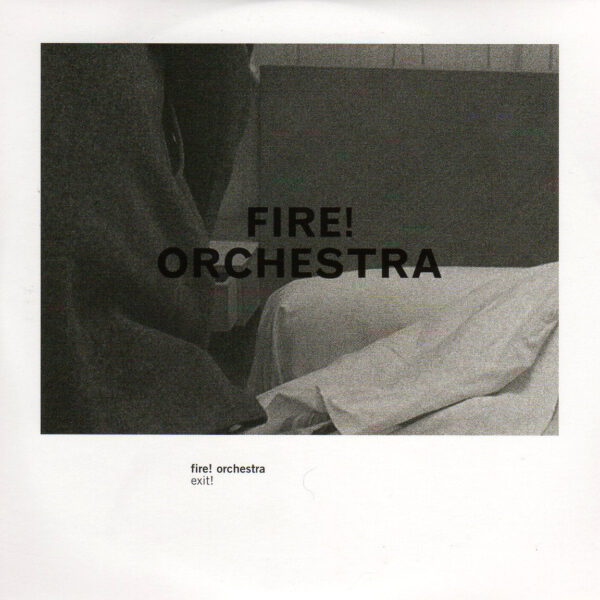 Probably not a precedent, but interesting enough a concept is the power jazz trio that always amounts to more than three. Fire! comprises multi-disciplinary heavyweights Mats Gustafsson (sax, Rhodes and electronics), Johan Berthling (bass, guitar and organ), and Andreas Werliin (drums and percussion), and is typically an extra-curricular venting venue for the three mainstays. Their two previous outings were collaborations with Oren Ambarchi and Jim O’Rourke respectively, but Exit! sees them fortified by a further 24 Scandinavian jazz musicians and the group’s name is expanded in a manner commensurate. Given the injection of so much new personnel, it is unsurprising that this venture exhibits wilder, more chaotic personality traits than the preceding team-ups.

However, with small measures of bemusement and disappointment I found that in spite of this feral enhancement, Exit! frequently stops short of an all-out jazz attack on the listener, articulating an operation somewhat less excessive than it is an exercise in restraint. Mysteriously so in fact, for both of the album’s long-form pieces are themselves bisected into sections of only anecdotal resemblance, when the four tracks that served the predecessor so well might have worked better.

‘Exit! Part One’ adds a beat to the club-footed lope of the last track of the Jim O’Rourke collaboration, (‘Unreleased?’); adopting a self-assured strut, which is realised in rising triplets. Swiftly enough, a sultry chanteuse enters the scene, her piercing ululations signalling the entry of some blazing Batman brass, which flares and fades in succession like a fleet of passing Cadillacs driven by Sun Ra. The vocals recede and return, delivered almost atonally and lacking – alas – the meaty delivery that made June Tyson so much more powerful than her pugilistic namesake.

The lyrics – to my ears – (a further innovation) are nondescript and a tad too rarefied, relating to ‘the possibility of improvising in actual space, and the ties ropes and teachers in many online spaces and programs’. As a consequence, the musical space reserved for voice feels like it could have been put to better use. However, ten minutes in and things start to gel a little more: bass and drums adopt a slower, pendular swagger; shimmering organs and horns render a background full-bodied but non-intrusive for further post-modern ruminations, resorting to shrillness only in the energised, final few minutes.

‘Exit! Part Two’ begins uneventfully, but tension mounts with a urinary urgency that finds a delayed but welcome release as a cascade of shrieking brass, which obliterates all memory of the innocuous yelps leading up, which might well have fled from Bono’s throat during scale practice. The rocking rhythm that drives this one, ebbs, rises and expands even when punctured by stabs of saxophone.

Inexplicably, this titanic machine halts in the eleventh minute, to be usurped by one bleating soliloquy and then another. The searing backdrop that hitherto rendered such ululations palatable is now gone and a full five minutes is spent building steam from squeaky fluttering, only to spazz it again, in the absence of an appetite for vocal histrionics. Mercifully, a fireball booms out of the void and burns a giant cigar hole in the speakers with a comet trail four minutes long, affecting a tentative redemption in the album’s dying minutes.

The flaws (by my reckoning) in this album are quite unnecessary: the weak vocals and the peculiar structure, to identify the principal culprits. The sense arises that errors of judgement are difficult to undo on a project of this scale. A brave face is needed. Which is not to say the album is a dud – probably it will knock many listeners out – and in its stronger moments the band hits a mean stride, sounding unstoppable. I don’t get those lost minutes back, but I do know when to put the kettle on.