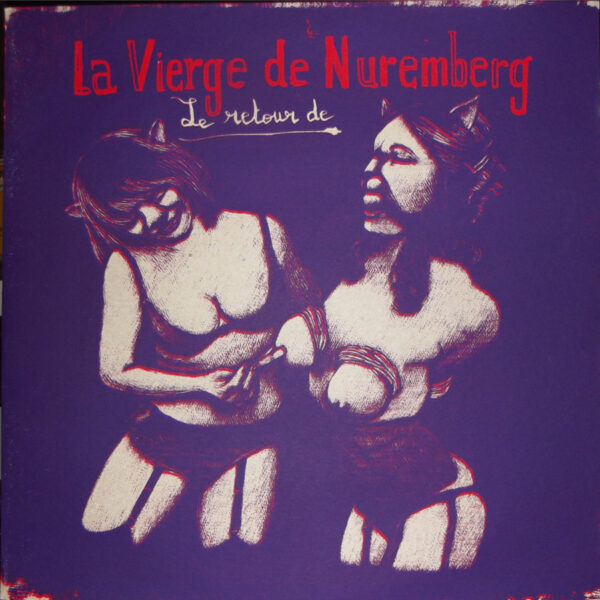 Another fine Jean-Noël Cognard project – ever since this veteran French drummer got in touch with TSP, he’s been exceptionally generous in supplying us with his vinyl releases, which happen to be on the Bloc Thyristors label and are usually sumptuous objects pressed in coloured vinyl with screenprinted covers, witness their other releases by Tankj, Empan, Tribraque, Ressuage and others. La Vierge De Nuremberg is a six-piece combo featuring the great Jac Berrocal on trumpet, flute and various “jouets sonores”, Cognard on the drums, plus a jazz-rock-type combo on guitars, bass, sax and “clavier vintage”, by which I suppose the French understand old analogue keyboards. They play a solid and energetic set on Le Retour De (BLOC THYRISTORS 0100), reminding us of a forgotten time when albums really were “albums”, by which I mean a collection of related and well-produced tracks edited into a coherent whole, and not simply two 20-minute sprawls of improvised noise plastered onto vinyl. The band here exhibit diverse interests in jazz, free-form improvisation, progressive rock, psychedelic rock songs, and a fair dose of inventive insanity when the occasion calls for it. Fans who are in the know will appreciate the first track on side two, ‘Rock N Roll Station’, where Berrocal stages a remake-revisit of one of his most famous pieces (the original was recorded in 1976 with Vince Taylor on vocals, but I find Berrocal has revisited it at least twice before in 1996 and 2007), and it’s still an eccentric gem, although its avant-mischief is largely untypical of the rest of this album which is more in the area occupied by great French prog music of the 1970s and 1980s, such as Gong or Lard Free, with perhaps the odd touch of Rock In Opposition groups. Recorded in 2011 in the Pierre Schaeffer studio. Mika Pusse did the highly kinky cover artwork with lashings of spanking, lingerie and tit clamps. From July 2012.

The Swifter is a collaboration between the Italian percussionist Andrea Belfi and BJNilsen, plus the pianist Simon James Phillips. Just four enigmatic instrumentals on this eponymous long-player (THE WORMHOLE WHO#02), where the pattern is that each piece starts with uncertain, near-chaos, coagulating gradually out of forlorn percussive scrapes and bangs, as if a house were being put together by renegade builders invading your garden at midnight; and then develops slowly into a glorious melodic crescendo as Phillips executes his assured minimalist arpeggios to soaring effect. What begins as slightly broken music transforms itself into a very stable and pleasing harmonic arrangement. The odd effect of hearing so many drum-rolls and piano introductions that don’t develop anywhere is that the listener is kept in a state of constant anticipation, as though watching a music hall stage where the orchestra are creating the world’s longest build-up for a star singer who never appears. An enigmatic release – the titles refer to capstan bars, wave guidance and neap tides for no apparent reason, and the record purports to be about “space”, but I enjoyed the very crisp and clear sound of the recording, a no-nonsense and unfiltered document of the performances. From 18 October 2012, apparently the second vinyl release from this subsidiary of the cassette-only Tapeworm label. Guerilla Toss are an American five-piece here with their Jeffrey Johnson (FEEDING TUBE RECORDS FTR 095) LP, just six tracks which make for a shortish LP or a longish mini-album. The band form a basic oddball rock setup with guitars, bass and drums, but much sizzling heat is added by their two secret weapons – the synth of Ian Kovacjr and the vocals of Kassie Carlson. Kassie’s vocals are shrill, high-pitched and harsh and most civilians will reach for their steel helmets after just five minutes in her company, but when she’s in the shrieky mode she reaches new heights of deliberate-obnoxiousness not heard since Japan’s Space Streakings. Mark you, she is also capable of muttering strangely into the mike like she’s just been woken out of a coma in the psycho ward, and is recounting the dreams she just had. Kovacjr’s insane electronics add tasty flavouring too, although I for one would have liked to hear more from his moth-like fingers skittering across the keys and dials. The rest of the band are great though, straining quite hard (perhaps too hard) to play crazy dynamics, with wild stop-starts and frantic explosions of errant rock noise provided as needed. They fit together as a unit like sixteen pairs of odd socks – you never get the same match twice. Their strenuous efforts ensure the music is always extremely surprising (to say the least), even at the expense of structure or song form. Clearly all of these young Bostonians have been digesting their post-punk record collection well. I dig the spontaneous energy of the whole album while it’s spinning, even if it doesn’t leave much of an impression after the fizz has died down. Since we received this item, they’ve got a CD out on Tzadik, so maybe that one’s slightly better “produced”. Jeffrey Johnson gave the album its name and also did the bonkers cover art. (23 November 2012).

Thurston Moore is one of the “executive directors” of Feeding Tube Records and it so happens he’s featured on the album Caught On Tape (FEEDING TUBE RECORDS FTR092 / MANHAND MH131), two sides of recordings taken from a European tour he did in 2012 with the drummer John Moloney covering his back. It’s a tremendous record. As is well known, 2012 was the year that Sonic Youth went on “hiatus”, and not even the press release makes any reference to this seminal band (although there’s a long checklist of Thurston’s other projects). Here, liberated from the song form and the need to hit marks, play on cue, imitate Glenn Branca compositions or do anything other than just play the guitar as he sees fit, Thurston is suddenly unleashed, born again. A meticulous musicologist could probably listen to side one alone and unpick musical quotes referring to anyone from John Fahey to Albert Ayler by way of Tom Verlaine, but everyone else is just enjoying the glorious melodic and psychedelic noise of unfettered amplified axe. Moloney’s drumming finally makes sense to me in this context too. I was usually disappointed by the sluggish Sunburned Hand of the Man records, but here Moloney’s loud and primitive bashes completely fit the bill, and the pair of them genuinely sound like they’re enjoying themselves. How often do we get that sensation these days? Recorded on cassette (like audience recordings) with a rough edge that aids the rawness of the music, the finished product has I suspect been edited in places – one or two splices are detectable on side one at least – but the cumulative effect is a non-stop exhilarating juggernaut of avant-rock madness. Fine art by Raymond Pettibon and Emma Kohlmann completes the package. Since the original “tour pressing” of 113 copies sold out instantly, this edition is a must-have! (23 November 2012)