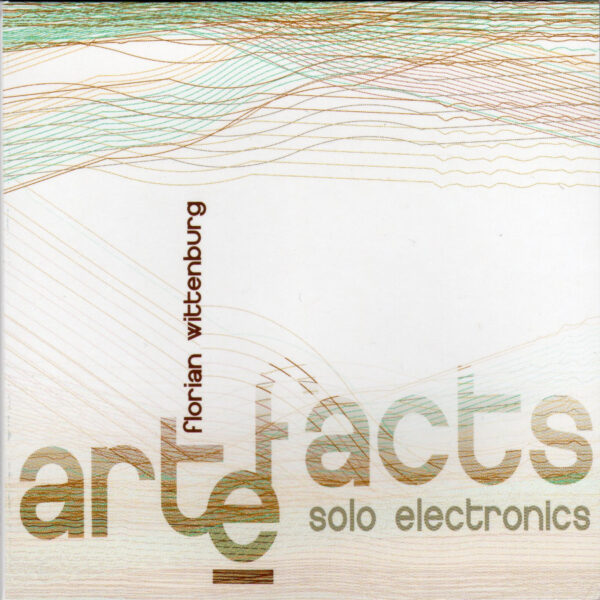 A minimal entry this, both in delivery and duration, but throughout the 44-minute lifespan of these ‘artefacts’, Florian Wittenburg has a lot to say to the listener sensitive enough to position ear patiently by speaker. Admirers of whirlpools will be drawn into the granular vortex of his solo electronics, where glacial pacing reveals strata of sound that might otherwise be glossed over by real time playback. Venture past the functional title and nondescript packaging and immerse yourself in a whirling void of dense and delicate textures.

Three of the pieces have their origins in the Messertisch, one of the stranger instruments of my recent acquaintance: a device comprising a large wooden chopping board, affixed to which is a row of kitchen knives. When the knives are plucked, the instrument sounds like a large and dangerous thumb piano. Wittenburg has treated samples of the Messertisch electronically (Kyma being his sound design language of choice) to entrancing effect: establishing a seemingly endless world of echo, a realm androgynously glassy and metallic. For those interested, YouTube hosts footage of an unadulterated performance of the instrument, featuring designer Stephan Froleyks.

The five pieces cover around 6 years of composition (2005 – 2011), the Messertisch pieces being both the more recent and the shorter. The collection’s underlying thread is its achingly slow pace, which manifests in alternating shades of menace and benevolence. Wittenburg works with a limited range of variables admittedly, but care is evident in the output: in the opener, ‘Nuageux II’, the air ripples and rolls the way rivers do, the vibrating knives almost visible. Vacillating between cavernous and dense, ‘Chaos Baart Harmonie’ is as monolithic as lathe-scored obsidian, carved particles tinkling hypnotically in frozen space like seashells in a tumble dryer. ‘Noisy Knifes + Gong’ (sic) sees gong chimes swelling from orifices torn open by processed metal-on-metal scrapes. ‘Aliasing bell pattern’ experiences underwater bell chimes from a bandaged, anaesthetised head – distant peals passing like rays of light over gauze in tightening sweeps. In the closer, ‘Nuageux IV’, a motorised metallic purr repeatedly retreats and returns in a spectrum of subtle new frequencies.

Were this CD 20 minutes longer its welcome might find itself outstayed – or worse – it might be relegated to the well-populated category of ‘unobtrusive background music’. But there is by far enough detail in these 44 minutes to initially intrigue and – in the longer term – reward the attentive. By no means iPod fodder; to the truly meditative listener it will pay the greatest dividends.