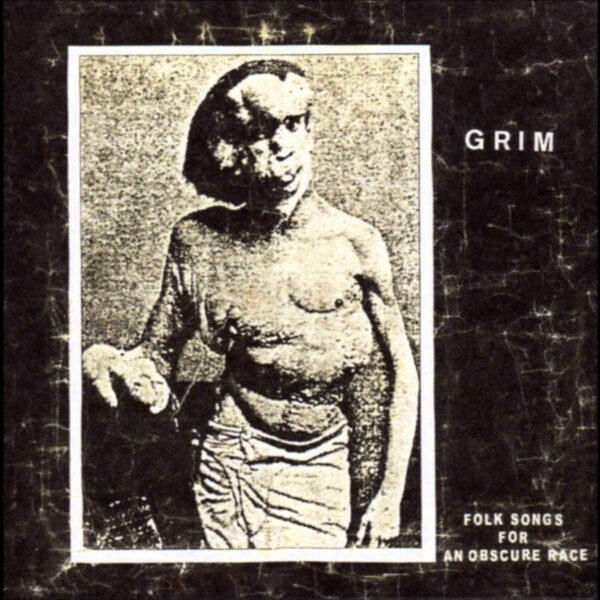 A weirdo industrial junk folk record, this is a compilation of releases and compilation tracks made in the 1980s by the Japanese industrial music project Grim. This band was (maybe still is?) the baby of one Jun Konagaya who sometimes had help from a couple of other noiseniks. This album is very much in the style of industrial bands like Throbbing Gristle, SPK, Z’ev, Einsturzende Neubauten and early Whitehouse: lots of bashing metal rhythms, a harsh declamatory pygmy-Hitler vocal, a screechy high-pitched siren drone, crude rhythms and song structures, and a lo-fi punk sensibility.

The recording switches from early noise-junk industrial to serene soundtrack music to harsh brutal power electronics to delicate acoustic-guitar folk ditties and back again: quite a dizzying range of music styles that bleed into one another can be found here. The contrast between severe uncompromising noise electronics, suggestive of torture, deviant sexuality and compulsive psychotic behaviour, on the one hand and an extreme faux naif innocence in the folk music stylings on the other can be very disturbing. I’m rather reluctantly reminded of some Whitehouse late-1990s releases that had tracks by Peter Sotos where he assembled together spoken dialogue recordings by girls and women who had been sexually abused. On several tracks, Konagaya’s vocal is pained and screechy, far beyond what William Bennett and Phillip Best achieved in their band’s heyday; on some of the later tracks, he could pass for Dalek Caan of the Cult of Skaro from Doctor Who.

What separates Konagaya’s music from his noisician compatriots is strong rhythms throughout the industrial pieces; the quieter folk songs have distinct lullaby melodies. The music is not at all free-flowing and the attitude behind it is very different: it’s often confrontational and hostile to the society from which Grim arises. The folk music pieces can be quite comic in their po-faced blank innocence after all the aggression that’s come before them.

All the music is very good if deranged and the tracks near the end of the album, superficially calm and child-like, are perhaps the most disturbing and freaky of all. They have a Grand Guignol air about them in their careful merry-go-round melodies and rhythms, while in the background something like a Nuremberg rally from the late 1930s might be running. Near the end, dreamy psych-folk songs sung by girl singers who might be evangelising for their particular nut-house religious cult that promises highly sanitised retro-1950s white-picket fence suburban domestic bliss salvation add another level of deranged sensibility. There’s an all-instrumental percussion piece that might have been written for a tap-dancing troupe that rounds off the album and at this point, I shudder to think that our friend Jun has been accepted into his local little trendy avant-garde artist colony that survives on government hand-outs and performance art stunts that try but fail to shock little old ladies and families with small children.

Nevertheless this album is a revelation in that there are actually forgotten Japanese acts that could more than hold their own against the likes of Throbbing Gristle and Whitehouse, that also didn’t fit into the classic Japanese noise improv mould. What more might there be, that have been overlooked for far too long?