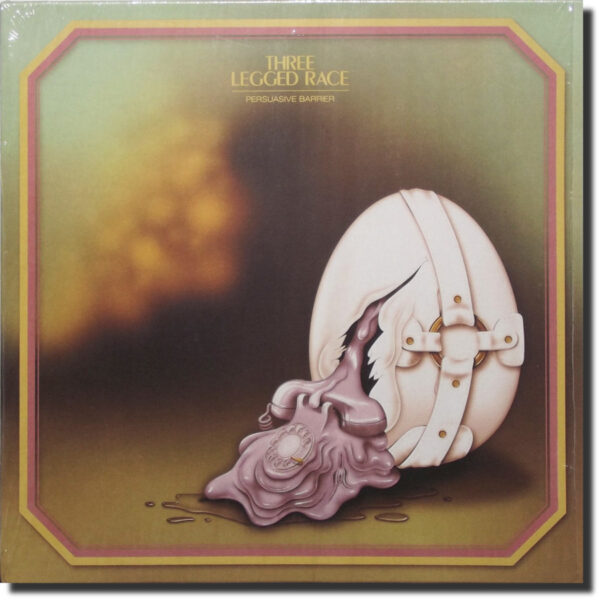 Check the Edition Mego’s ‘Spectrum Spools’ website, scan the covers and this is the one your eyes will be drawn to: a tightly rendered telephone melting out of a white leather egg. Correspondingly, the record it protects vomits vast valleys of multi-coloured, molten strangeness into listening spaces, and long may it do so. Persuasive Barrier is the surreal spawn of Robert Beatty: Kentucky-based multi-media artist, progenitor of a panoply of psychedelic sleeves (including the iconic, airbrushed moonscape to Burning Star Core’s Challenger), small-run cassettes and now this strangely hued volume of lysergic library music under the ‘Three-Legged Race’ moniker. It calls up any number of potent references: visual classics such as La Planète Sauvage, the works of Piotr Kamler, right up to the deliciously dreary Willows by Belbury Poly, but none more accurately than Mort Garson’s Black Mass (under the ‘Lucifer’ pseudonym). Like the scratch-card I’ve never found, it’s an instant winner.

I was fortunate enough to receive the record during a spell of the ‘there’s no more ‘new’ music (just a spectrum of spins on the old)’ doldrums, and to be honest my mind hasn’t changed. However, faith is fully refurbished when, balanced between the imitation and ‘innovation’, one encounters such a successful restoration of a well-worn sound. Alternating between ear-baitingly brief synthetic song-craft and longer, woozier wig-outs, the tracks exhibit resourcefulness using a presumably pared-down set-up and an intrepid navigator’s spirit of adventurous tomfoolery.

The scene is set in the opening tracks: ‘Traces of a Wet Crowd’, a spirited swarm of pinpricks and clipped garbles, lasts long enough to bemuse before melting into ‘Permethrin I’: a yawning groan of cold, metallic space. Alternation between these atmospheres of bleepy whimsy and deep paranoia characterises the overall content. Highlights include the melancholic ‘Persuasive Barrier’; a ponderous procession of descending, doleful pulses, eliciting many a bleak, airbrushed sci-fi paperback landscape, and ‘Magnetic Bride’: another Terry Gilliam sky rattled by ring-modulated gargles, faint laboratory burbles and quicksand-distressed SOS bleeps, as if an old Dr Who soundtrack had somehow gained sentience and outgrown its background role.

Though teasingly tiny, the album is perfectly proportioned space-pop: its 5-year genesis suggesting sincere craftsmanship: the labour of love. Retro-sleeve art included, Beatty himself has confirmed that he sees his work as a considered reaction to a pervasive culture of internet-ready laziness. Persuasive Barrier isn’t an original sound, granted, but neither is it derivative, and certainly has the capacity for succour, not least to Ghost Box fans who feel those releases have lately lost the zeitgeist that once distinguished them. Of all the releases I’ve reviewed for this journal thus far, this is one of the best. It has my fullest possible recommendation and strikes me as the very reason replacement cartridges are made available.