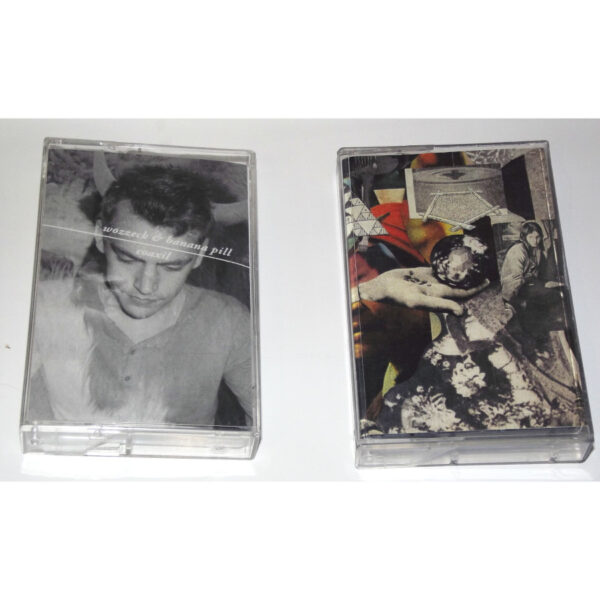 Time to get our fangs into some more cassette tapes. There are times of the day when only a small-run independent tape can satisfy a man’s urges. Can a man who doesn’t own a tape deck truly be called a man, I ask myself 1. Ilya Belorukov is a Russian fellow who we spoke to for TSP issue #21, and he’s pretty much waging a one-man campaign for free music, extreme metal, drone and avant-garde jazz in Saint Petersburg, often doing so in the space of a single album. Actually it’s not really a one-man effort when he has friends like the members of Wozzeck behind him. Wozzeck appear on side one of this split tape (ALREADY DEAD TAPES AD057) which we got on 11 December 2012. In fact for ‘Puhdas Ruoka’ they teamed up with the Finnish duo Banana Pill and the four-man team made a lovely sound together in Helsinki in the spring of 2011. What may begin as abrasive texturised abstractery resolves itself into quite a heavenly and mystical episode. Angelic choirs, I would say, worthy of inclusion as soundtrack music for certain cinematic moments of Tarkovsky. Many dream of achieving this degree of perfect and translucent blending of their combined sound, where the individual contributions just melt into a cosmic share of ever-giving plenty, surrendering their identities willingly. Just 40 copies of this artefact confirm it as something of a hidden gem.

Flip it over to hear the Coaxil side, which contains two pieces, ‘Gulf Of Izmir’ and ‘Mzee’ and represents quite a different burst of digital malarkey. It’s more in the zone of strident avant-garde Techno than dreamy droning. Synths and sequencers and rhythm boxes spit out slightly addled phrases and half-formed patterns, occasionally interrupted by the voice of a chanting female mystic issuing a terse and enigmatic sentence. The overall sound seems so stripped-down that I assumed it was the work of a single synthesist, and was a tad surprised to learn that Coaxil are a threesome of Russians who have been doing it in Saint Petersburg since about 2009, often joined by their singer and a fifth member who does live mixes of visual material for their multi-media shows. On a chilly Russian night at 2 AM, fortified by strong vodka and surrounded by enthused clubbers hopefully wearing fur coats, I expect the Coaxil experience is truly memorable – especially if amplified and accompanied by fast-moving visuals on a big screen. On this cassette tape though, it comes over a bit limp and constrained. The itchy restlessness of their scatter-shot music may appeal, but unlike the flip side of this split their pieces don’t feel “performed” enough for me, and I harbour some doubts as to how much the team are able to successfully control or direct their equipment in their favour.

Keeping things more or less Russian, I thought fit to delve into the box of goodments kindly sent to us in September 2012 by Ivan Afanasyev from Petrozavoosk. Very coincidentally of the six tapes herein (all released on his Full Of Nothing label), one of them is a self-titled cassette by Banana Pill (FULL OF NOTHING fon31). This gives one a chance to hear their solo turn, and the two Finns Dmitri Zherbin and Sasha Kretova spread themselves out quite luxuriantly with their guitar and violin-based performances, the rich and melodic drone-music much enhanced and deepened by use of synths and some studio processing, or simply using a smidgen of digital delay. Sasha and Dmitri may be a little slow to start (like a Tunturi on a cold morning), but when they uncoil at length into the correct musical niches, they tend to occupy the space like an incandescent python. A very sleepy python. The duo also exhibit their own brand of the whimsical eccentricity and cluttering sound that has come to characterise certain strands of music from Finland, often labelled by some as “Finnish Folk” for want of a better way to pigeonhole any music made with acoustic instruments. However, there’s little aggression or grit in their spacey-vibey trance music, and even the label notes tend to emphasise the calm, sweetness and peacefulness of Banana Pill. Nothing wrong with those sentiments, but when that Pill is wafered into the more punchy-noisenik tendencies of Wozzeck as above, a more complex dosage results.