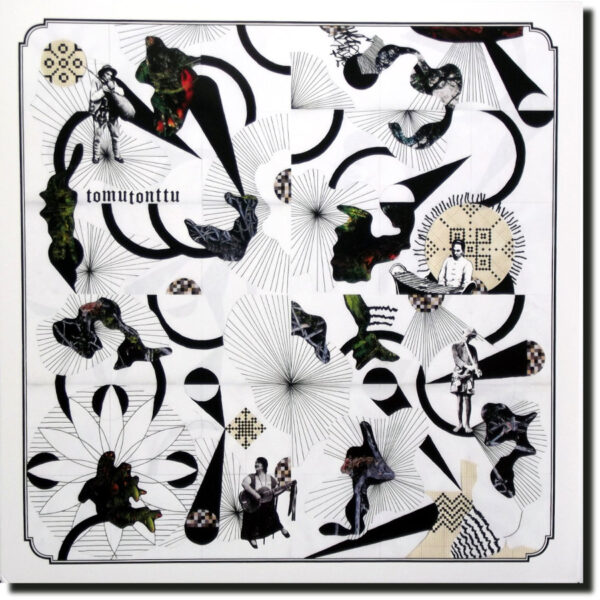 My enthusiasm for Finnish psychedelic music will never equal that of those fanatical folks at Aquarius Records. Not because of any audible shortcomings in what I’ve heard – quite the opposite in fact – but because I am so genuinely intimidated by the sheer quantity of product that I wouldn’t know where to begin, even if I had the time to check it all.

It helps immensely to have a small scene showcase on your doorstep. I was fortunate to be able to speak to Tomutonttu’s Jan Anderzen at one just a stone’s throw from here, last year. Flu-smashed yet hardy and pragmatic the way Finnish people often seem to be, he answered my questions, told me about his records (one of which I bought and review here) and went on to deliver a delirious AV set so pantomorphic one’s eyes could scarcely settle on a single shape. Harry Smith’s Abstractions had nothing on it. So intense was my experience of his work that it hardly surprises me that British man-flu should have been to Anderzen but a minor setback.

When he’s not delivering mass hypnotism, Anderzen trades actively under any number of guises in the Finnish scene. He’s the lynchpin of the rotating-cast of Kemialliset Ystävät, and features in and on too many groups and releases to mention here (including confounding variations on the alias under review). That’s what Discogs is for. Tomutonttu is Anderzen’s private playground, presumably providing some sort of release valve for the many ideas he has knocking around. Indeed, he makes something of a virtue out of putting discarded recordings to good use with this project, largely by applying a ‘smash ‘em together and see how it sounds’ credo, which seems to work in his favour for the most part.

Comprising a selection of ‘aborted’ releases dating 2005-11, and blended beautifully to beget an ever-morphing audio pot pourri that never dispenses the same scent twice, Hylyt isn’t just a whimsical spelling of the word that gives us ‘special moments’; it actually translates as ‘Wrecks’, which in this case refers to ‘the collective state of consciousness attained on the way to the bottom’. I’ll spare you the Stygian psychology; suffice to say that through its disparate array of mysterious landscapes (and fidelities), the music sublimely illustrates a shift from one state of collapsible horror to another, exposing something quite entrancing in its entirety. Defined by the artist as “diploma work for the University of Bananafish” (whose Dylan Nyoukis ratifies the proclamation by providing an anomalous poem insert), this could easily have graced any one of that beloved magazine’s cover CDs. In fact, it sounds rather like a mischievous reworking of one’s entire contents: speed, direction and pitch all victims to a capricious and curious little sprite; weaving in and out of passages of pastoral psychedelia, slug-speed walls-of- noise and amplified, night-time twinklefests. There are, admittedly, points at which the transitions are a little too sudden, raising moments of doubt, but I suspect this effect to be volitional. Overall, it is an approachable brand of chaos.

Of a similar species, if a little more refined in pedigree, Tomuuntuu is another restless, amorphous and entirely more streamlined beast. This attractive picture disc sports a recording assembled as a radio piece, commissioned by Aanem Lumo Festival for New Sounds, and performed at the Orion Theatre in Helsinki on the 8th November 2010. I imagine it made rather a good impression, if Anderzen’s kaleidescopic AV shows affect Finnish audiences the way they do me. Beginning as an effervescent organ over a measured, thudding gait, it is tugged by one of Anderzen’s slow, transparent howls through the mirror, into a labyrinthine Wonderland of alien tweets and twitters, zaps and flutters, before skidding headlong into an intense cartoon alternate dimension soundtracked by the kinds of tape-splicing boffins who turn up on plush multi-disc compilations nowadays. And so on. By virtue of the single side, time is precious, so great lengths are taken to maximise the zany, card-shuffling states of mind, leaving the listener a rather bewildered winner. Our insanity is clearly Jan Anderzen’s clarity.