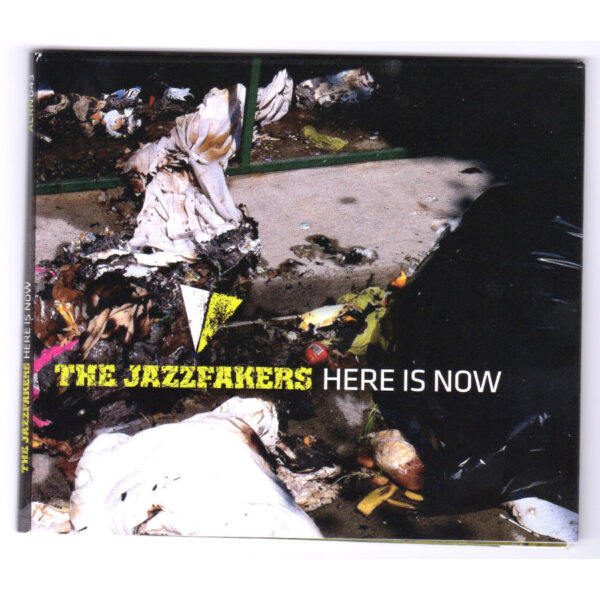 The first time I heard about ‘fake jazz’ it was John Lurie’s description of his Lounge Lizards outfit. Word had it that jazz purists were irked, though I was bemused by the idea of sensibilities offended by the cool cohabitation of its smooth (by No Wave standards) jazzy contours and Arto Lindsay’s barbed guitar strangling. That was my first love in ‘jazz’: one that has developed over the years. Much has changed in the world of NY jazz too, if the (latest incarnation of) JazzFakers provide trustworthy testimony. Low on goose honks, but high on something I’d rather not try; the above stylistic demarcations have haemorrhaged heavily, and rockier tendencies – those found in ensembles such as Dr Nerve or This Heat – impregnate Here Is Now, along with all manner of unnameable scrap suggested by the sleeve. Here and now, it all swirls together like a melted radio.

Propelled by sax and keyboard man, David Tamura – something of a mover and shaker in the NY underground scene it seems – The JazzFakers max the volume on their effects boxes and shred with abandon. ‘Fake jazz’ gestures are absent, but there are lots of distorted guitar runs, bassy plinks and plonks and wave upon wave of treated, nauseating noise. It’s a New York native and no mistake. Such self-intoxication and avowed alienation of structure will likely distance lovers of straight melody and (even) avant-skronk, which is, I suppose, as ‘punk’ as one can hope for in this post-everything point in time. Simply put, everything explodes in all directions and cares not for your acceptance, nor mine. Ten out of ten for attitude; but points off for the carsickness.

I prefer the moments when the iridescent morass coagulates into something ‘musical’ – as on the energised bass and sax run on ‘Nowhere Is’ (the oblique Sun Ra reference suggesting a sly wink, possibly conceit) and ‘Weise Horn’, in which the sea of distortion encroaches like a tar flood that washes the band away. By ‘Horse Wine’ the addition of a stable, skinned rhythm to the mix establishes a sound one could click fingers to, provided amphetamines were within easy reach.

In case you hadn’t noticed, track titles are all anagrams of the album title – a trait that further contributes to the album’s sense of hermetic self-containment, in which every idea is indulged to fruition. The trend culminates in the aptly titled ‘Hero We Sin’- the biggest beast at nearly 13 minutes – perhaps an implied tribute/apology to the hardy few to brave the waves of ugly sound between every milestone of rubbery jazz, by drenching ears in a distillation of everything this album is. 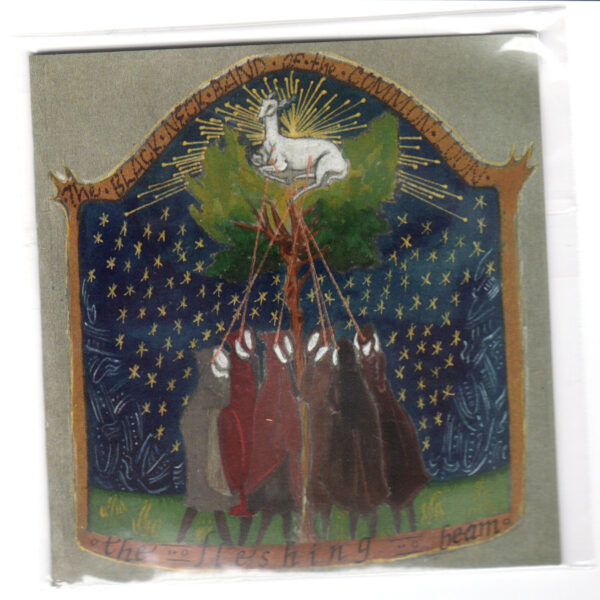 Dandruffy ‘freak-folk’ flecks fall from the shoulders of this multi-man behemoth – The Black Neck Band of the Common Loon – which lumbers in a manner more akin to psychedelic troubadours Sunburned Hand of the Man or Volcano the Bear, with a hint of Tom Waits’ old boneyard rhythm section. This open-door cast ensemble hails from Brighton – to my barbarian ears seemingly well graced by strange and interesting artists these days – and is driven by Foolproof label don Andy Pyne and mysteriously monickered multi-instru-mentalist Blue Pin, accompanied by a Jason Williams on (correct me if I’m wrong) tenor sax and a rather angry electric guitar. Going by Blue Pin’s (darkly) illuminated cover one might anticipate something along the lines of a Constellation release: atmospheric and emotive long-form rock orchestrations. Such a notion wouldn’t necessarily be inaccurate, though the sound of this earthy anomaly is far from as streamlined as much of what I’ve heard from the respected Canadian label.

Clattering clumsily into being on most of the eight tracks, the group lurches in a manner menacing by virtue of its disregard for passers by. For the most part, it’s warbling woodwinds, screeching strings, saw-toothed guitar and steam train percussion – thundering slowly towards God-knows-where, like a nightmare carriage glimpsed in a protagonist’s blind spot in a Thomas Ligotti story. Of particular note is ‘Open Mouth Mounting’, which sports rhythm and rambling vocals suggestive of an esteem for the more driven, psycho-ethnic improvisations of Sun City Girls – particularly those on Kaliflower or early Carnival Folklore entries. From charcoal to abysmal, every track is a different shade of black, and the violence – though often implied – is jarring and intrusive. This manner is most successful when individual elements do not encroach, though there are times when the relentless shredding becomes a little overwhelming. Still, there’s a time and place for such scorched-earth antics.